College basketball ready to rev up with fans in the stands 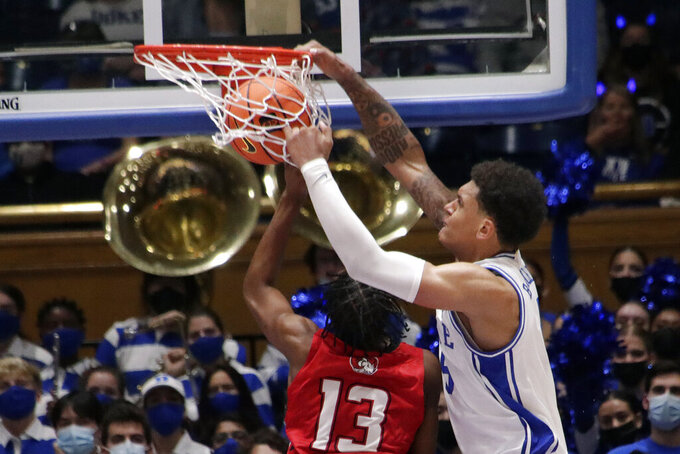 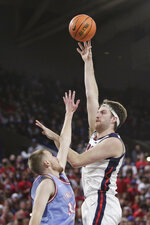 Talk about buildup for a season.

College basketball had March Madness wiped out and no national champion because of the pandemic in 2020. Last season was mostly played without fans and the NCAA Tournament was in an Indianapolis bubble

Well, the doors are open this season and the arenas will be packed. The fans will love it and the players will, too.

And it should be an incredible ride to the Final Four in New Orleans with so many great teams, veteran players with extra eligibility and another crop of fabulous freshmen.

Gonzaga. The top-ranked Zags came up a game short of their first national title last year and will be among the favorites to get back there this season.

UCLA. Nearly everyone is back from the Bruins' 2021 Final Four run. Don't be surprised if they get there again — and maybe win it.

Kansas. An early loss in the NCAA Tournament caused Bill Self to tear down his roster and rebuild it. The replacement parts — top-tier transfers and multiple-star freshmen — have the Jayhawks eyeing a much deeper run this season.

Villanova. Master tactician Jay Wright is about due for another championship. He has the type of roster to pull it off.

Texas. Chris Beard wasted no time in loading up his first roster in Austin with talented veteran players. Those missed NCAA Tournaments and early exits could be a thing of the past.

Drew Timme, Gonzaga. The crafty big man and his ‘stache decided to come back. We’re all beneficiaries.

Johnny Juzang, UCLA. Wow, what a star turn he took at the NCAA Tournament. It'll be fun to see what's next for the high-scoring guard.

Kofi Cockburn, Illinois. The 7-foot, 285-pound big man is back after looking at the NBA. Good luck to anyone who tries to get in his way.

Trace Jackson-Davis, Indiana. The junior forward led the Hoosiers in scoring, rebounds and blocked shots last year. He could lead them back to the NCAA Tournament this year.

Champions Classic, Nov. 9, New York. A Kansas-Michigan State, Kentucky-Duke doubleheader at Madison Square Garden is the perfect way to kick off the season.

Gonzaga vs. No. 9 Duke, Nov. 26, Las Vegas. The Holmgren-Banchero matchup is worth the price of admission alone.

No. 10 Kentucky at No. 3 Kansas, Jan. 29. A midseason matchup of blue bloods during conference season will be a nice change of pace.

No. 19 North Carolina at Duke, March 5. Coach K's final regular-season at Cameron — against the rival Tar Heels, no less — cannot be missed.

Memphis. Penny Hardaway has assembled quite the collection of talent in Memphis. Ending an eight-year NCAA Tournament drought could be just around the corner.

Houston. Kelvin Sampson put the Cougars back on the national map with last year's NCAA Tournament run. Don't expect them to fall off anytime soon.

St. Bonaventure. The Bonnies are loaded for a deep March Madness run.

Richmond. A foursome of super seniors could lead to a super season of the Spider.

Chet Holmgren, Gonzaga. The term unicorn gets overused. This 7-foot, 195-pound, shot-blocking, outside-shooting, ball-handling Zag may just be one.

Paolo Banchero, Duke. The 6-10, 250-pound forward has been projected to be the No. 1 pick in the NBA draft. College basketball fans are about to see why.

Emoni Bates, Memphis. The sharp shooter will get buckets in bunches for the Tigers.

Patrick Baldwin, Jr., Milwaukee. The skilled 6-9 power forward spurred Kentucky and Duke to play for his dad in Milwaukee. He has the skills to match any player in the country.

Kennedy Chandler, Tennessee. Want someone to run an offense? There may not be anyone better than the speedy, heady 6-footer.

Chris Beard, Texas. The defensive guru took Texas Tech to the Final Four and is already turning heads in Austin.

Tommy Lloyd, Arizona. Mark Few's long-time right-hand man at Gonzaga gets his first shot a leading a program. He has the roster and the chops to have an immediate impact.

Hubert Davis, North Carolina. The former Tar Heels player and assistant takes over for Roy Williams. It should be a seamless transition.

Shaka Smart, Marquette. He wasn't able to lead Texas to an NCAA Tournament victory. Back home in Wisconsin, Smart is hoping to conjure up some of the same magic he had at VCU.