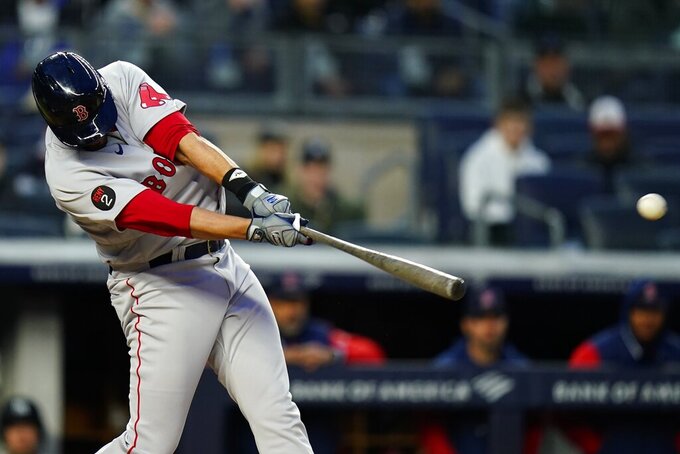 Boston Red Sox's J.D. Martinez follows through on a RBI double during the first inning of a baseball game against the New York Yankees Sunday, April 10, 2022, in New York. (AP Photo/Frank Franklin II)

NEW YORK (AP) — Red Sox slugger Bobby Dalbec didn't homer until the 19th game of his rookie season last year, a slump that nearly took him into May.

He'll remember this one more fondly.

Dalbec hit a tiebreaking solo homer in the sixth inning and Boston avoided a season-opening sweep against its longtime rival with a 4-3 win over the New York Yankees on Sunday night.

Boston blew multi-run leads in the first two games of the series and did so again Sunday. This time, the Red Sox rallied back, with Dalbec connecting off reliever Clarke Schmidt (0-1) for his first of the season.

The Red Sox ended an eight-game regular-season skid against New York — a stretch that doesn’t include their victory in last year’s AL wild-card game. The rivals don’t play again until July 7.

Rookie right-hander Kutter Crawford (1-1) threw two of Boston’s 5 2/3 scoreless relief innings for his first big league win, and Jake Diekman pitched the ninth for his first save. J.D. Martinez had an RBI double, one of the team's five hits.

New York's Anthony Rizzo made it 3-all with a two-run single in the fourth, scoring Yankees newcomers Isiah Kiner-Falefa and Jose Trevino after they opened the inning with their first hits in pinstripes.

Rizzo and Giancarlo Stanton continued torrid starts to the season. Rizzo had a hit and walked twice, and Stanton had three hits. Both homered in each of New York's first two games. Stanton had gone deep in six straight games against the Red Sox, including the postseason.

Boston is going closer-by-committee to start the year, and Diekman surely earned himself another ninth-inning look. The sidearm-slinging lefty struck out Aaron Judge on 11 pitches to open the ninth, then got Stanton and Joey Gallo swinging, too.

Dalbec hit 25 homers as a rookie last season but batted .240 with 156 strikeouts in 133 games. He improved dramatically in the second half, posting a .955 OPS and driving in 42 runs over 61 games. The 26-year-old said he learned late last year how to make quick fixes when his swing got out of whack, something that helped him bounce back this weekend after striking out four times in Boston's first two games.

“In August and September, whenever he got a pitch that he can handle, he put a pretty good swing on it,” manager Alex Cora said. “And that was a really good one.”

Yankees starter Jordan Montgomery took Xander Bogaerts' 103 mph grounder off his left knee in the first inning and fell to the ground screaming. He remained in the game but gave up Martinez's RBI double the next at-bat and trailed 2-0 after the top of the first.

Montgomery completed 3 1/3 innings of three-run ball. Yankees manager Aaron Boone said X-rays on Montgomery’s knee were negative, but the left-hander was stiffening up after the game. He will be re-evaluated Monday.

“Obviously to see him rolling around like that in pain was certainly concerning,” Boone said. “Pretty gutsy effort to kind of walk it off.”

New York forced Houck to throw 31 pitches in the bottom of the inning but left the bases loaded. The first inning took 37 minutes, part of yet another sluggish Sox-Yanks game that lasted 3:40.

Yankees leadoff man Josh Donaldson struck out looking three times for the first time in his career. All three came against Houck.

New York stranded 11 runners Sunday and 25 over the three-game series.

Boston's Christian Arroyo made his first big league start in right field and slid to take away a hit from Gleyber Torres in the seventh.

The Saint Peter's men's basketball team was honored prior to the game for its unexpected run to the Elite Eight. Senior forward KC Ndefo delivered a strike for the ceremonial first pitch.

The Red Sox signed right-handed reliever Garrett Whitlock to an $18.75 million, four-year deal Sunday covering 2023-26 that includes two club options and escalators that could increase the total to $44.5 million over six seasons.

Red Sox: New 2B Trevor Story was out of the lineup and away from the team with flu-like symptoms. A COVID-19 test came back negative. ... RHP Matt Barnes remained out with a tight back, but Boston thought he might be ready to pitch Monday.

Yankees: C Ben Rortvedt is expected to ramp up activity Monday as he works back from a strained right oblique muscle. There's still no estimate on when he'll return to game action.