Defense leads No. 3 Arizona to 67-56 win over Arizona State 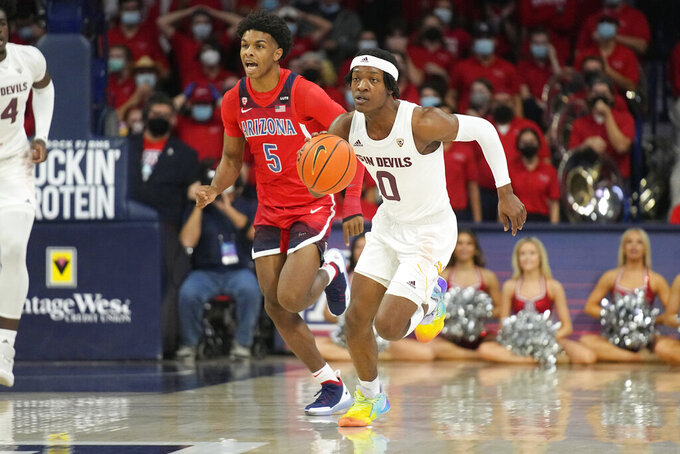 When the shots weren't falling and the pace became a grind, the Wildcats turned to their defense.

Turns out, they're pretty good on that end, too.

Overcoming a second shaky shooting game, No. 3 Arizona turned up the defensive pressure in the second half to beat rival Arizona State 67-56 on Saturday.

“We’re a good defensive team and to be able to hang your hat on your defense in a stretch where your offense is struggling like it is, it’s very important to competing for championships,” Arizona coach Tommy Lloyd said.

The Wildcats managed to hang around despite their shooting woes and their defense carried them in the second half to remain undefeated (11-0) at home.

Bennedict Mathurin and Oumar Ballo led Arizona with 14 points each.

Arizona State (6-12, 2-6) managed to slow down one of the nation's fastest-tempo teams and seemed to have the Wildcats on the ropes several times. The Sun Devils kept letting the cold-shooting Wildcats hang around, then went cold themselves to lose for the 11th time in 12 games at McKale Center.

DJ Horne led Arizona State with 15 points, but had just two in the second half.

“They're a great defensive team and it definitely showed with their size,” Horne said. “It was hard to drive into some gaps and rebounding.”

The shaky shooting continued early against Arizona State. The Wildcats missed their first eight shots and 10 of 11 to fall into a seven-point hole in the opening seven minutes.

And they kept missing, finishing the first half 7 for 29 while missing all 13 of their 3-point attempts.

The Wildcats still managed to tie the game 32-all at halftime by hitting 18 of 21 free throws.

Arizona ratcheted up the defensive pressure in the second half and started hitting a few more shots. Kerr Kriisa hit Arizona's first 3-pointer in 15 attempts and Pelle Larsson later banked in a 3. Justin Kier scored on three-point play to cap a 10-0 run that put Arizona up 60-48 with five minutes left.

The Sun Devils had chances to pull away themselves.

A depleted Arizona State — seven scholarship players — got off to a quick start before fading in a 22-point loss to No. 15 Southern California on Monday.

The Sun Devils had Kimani Lawrence back against Arizona and got off to another fast start, building a seven-point lead and later an eight-point lead. Arizona State's 11 first-half turnovers, many in transition, allowed Arizona to hang around.

The Sun Devils cut down on the turnovers in the second half, but still struggled against Arizona's defensive pressure. Arizona State hit one field goal in 10 1/2 minutes as the Wildcats stretched the lead and shot 8 of 34 in the second half.

“In a game like this where the guys are really juiced to play and the crowd and everything, you can get a little rattled,” Arizona coach Bobby Hurley said.

Arizona State did what it needed to against one of the nation's fastest team, grinding the game to a near halt. Arizona's second-half defensive pressure proved to be too much, sending the Sun Devils to their fifth loss in six games.

It wasn't always pretty, but Arizona found a way. Free throws kept the Wildcats in it in the first half and defense triggered their offense in the second to pull away.

Kriisa gave Arizona a lift in the second half after a rough lkast game.

The Estonian point guard went 0 for 12 against UCLA — nine of those 3-pointers — and opened Saturday’s game by missing his first four shots. Kriisa kissed the logo at center court after hitting Arizona’s first 3-pointer and blew a kiss to the crowd after draining another.

Arizona: Gets a rematch against UCLA at home Thursday.