Dotson and Azubuike lead No. 6 Kansas over Texas 66-57 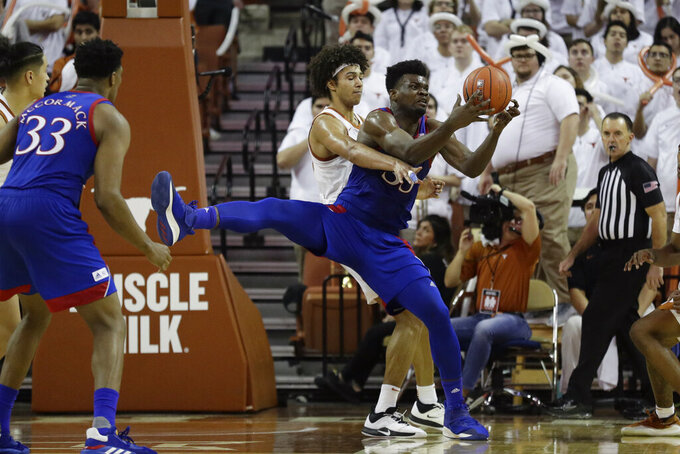 Kansas center Udoka Azubuike (35) is pressured by Texas forward Jericho Sims (20) as he grabs a rebound during the second half of an NCAA college basketball game, Saturday, Jan. 18, 2020, in Austin, Texas. (AP Photo/Eric Gay) 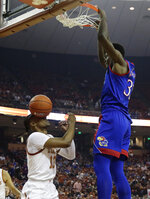 Dotson returned to the lineup after sitting out a game with a hip pointer injury and gave the Jayhawks a big late 3-pointer and free throws down the stretch to lead Kansas over Texas 66-57 on Saturday.

Dotson scored 21 points, including the final seven of the game for the Jayhawks. His long 3-pointer with 2:49 put Kansas ahead by eight and four straight free throws in the final 39 seconds closed out the win.

“If we played without him today, we would not have won,” Kansas coach Bill Self said.

“It felt great,” Dotson said. “Coming in, there were no restrictions. When I'm out there playing, I have no excuses. I'm getting treatment. It's gonna be fine.”

Kansas closed the game with a 12-3 run that started with consecutive baskets from Marcus Garrett. The Jayhawks got a big break when Garrett was initially called for a charge, but the foul was quickly reversed. The layup counted, Garrett made the free throw and Jayhawks led 59-54 before Dotson closed it out.

Garrett had a scary moment earlier when he landed hard after an off-balance shot attempt. He stayed on the floor for several minutes and then briefly went to the Kansas locker room. He returned a few minutes later and made the big plays.

“That was a remarkable recovery," Self said. “I think (the fall) scared him more than anything else."

Dotson's 3-pointer was just the second of the game for Kansas, the best-shooting team in the Big 12 from long range. Kansas attempted only 10, opting instead for Dotson and Garrett to drive or to push the ball inside to Azubuike, who was locked in a battle under the basket with Texas' Jericho Sims.

Sims scored a career-high 20 points for the Longhorns (12-5, 2-3) and tied the game at 54-all. Texas gave him little help from the outside. After averaging 12.5 3-pointers in their previous two games, the Longhorns were just 6 of 20 on Saturday.

“Those two (Sims and Azubuike) canceled each other out," Texas coach Shaka Smart said. “”Their guards were the biggest difference in the game."

Kansas: Saturday was the eighth time the Jayhawks made four or fewer 3-pointers and the third time in Big 12 play. Isaiah Moss, who started in Dotson's place against Oklahoma and made six, took and made only one in 32 minutes against the Longhorns.

“Its going to catch up to us,” Self said. "We were fortunate today. We’ve got to be a team that knock (them) down. We’re not going to shoot as many at most."

Texas: The Longhorns let what would've been a big upset get away. A win could have changed a lot for the Longhorns going forward, but instead Texas now has two home losses in its first five Big 12 games. The inconsistency of the 3-point shooting continues to be baffling. In all three Big 12 losses, Texas has made six or fewer from long range.

Texas guard Andrew Jones scored eight consecutive points for Texas in the first half in a 13-1 run that opened an eight-point lead. Jones didn't score again and missed all four of his shots in the second half.

Smart lamented that Texas didn't build a bigger lead. The Jayhawks pulled the game back within six by halftime.

The game had an extended break in the second half when a fan collapsed behind the Texas bench during a timeout. Emergency officials had to move several chairs off the Texas bench to take her out of the arena across the court on a stretcher.

Texas officials didn't release any further information on the incident or the women's condition.

Texas plays at No. 12 West Virginia on Monday.