First Four back in Dayton with a 'home' team, Big Ten squads 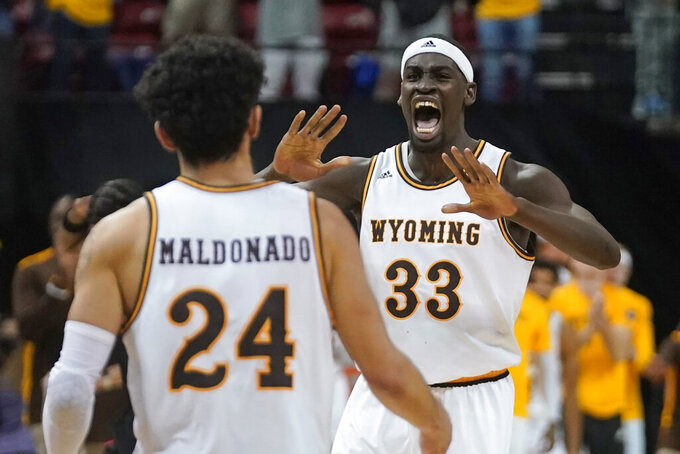 FILE - Wyoming's Graham Ike (33) reacts during the second half of the team's NCAA college basketball game against UNLV in the quarterfinals of Mountain West Conference men's tournament Thursday, March 10, 2022, in Las Vegas. The Cowboys are back in the NCAA tournament for the first time since 2015 when they won their conference tournament. (AP Photo/Rick Bowmer, File)

DAYTON, Ohio (AP) — The First Four is back in Dayton for the first time in three seasons, and the selection committee made sure there will be extra excitement in the building by dropping a local team into the play-in mix.

One of the things the NCAA likes about the University of Dayton Arena is that, no matter who is playing, fans will fill it up for all four games and help put on a good show for a national TV audience hungry for March Madness.

This time, the First Four will have an unofficial home team in Wright State, whose own basketball arena is just 15 minutes across town.

The Tuesday slate will feature Indiana, which returns to the tournament for the first time since 2016 and in the first season with a new coach, Mike Woodson. The Hoosiers (20-13) face a Wyoming team from the Mountain West that finished 25-8 and, like Indiana, earned an at-large bid.

The Hoosiers' five-year absence — not including 2020 when the coronavirus pandemic wiped out the tournament — was the longest since they were out of it from 1968-72.

“Honestly, Coach Woodson to me has just brought a light," Hoosiers forward Trayce Jackson-Davis said. “I feel like Indiana basketball has been in the darkness for so long now.”

Indiana wasn't stellar during the season but got on a roll, beating Michigan and upsetting top-seeded Illinois in the Big Ten tournament before losing to eventual champion Iowa by three in the semifinal round.

The Cowboys are back for the first time since 2015, when they won their conference tournament. This year, Wyoming lost to top-seeded Boise State in a tournament semifinal.

“We knew we were going to be right there on that bubble,” Wyoming coach Jeff Linder said. “Thankfully, the committee saw our body of work throughout the course of the season.”

The winner will be the No. 12 seed in the East regional and face fifth-seeded St. Mary's on Thursday.

Texas Southern (18-12) got an automatic bid by winning the Southwest Athletic Conference tournament. The Tigers previously won First Four games in 2018 and 2021 and lost one in 2014.

Texas Southern is an experienced team but lacks a big-time scorer. It is paced by John Walker III (9.9 points per game, 4.3 rebounds per game), and Joirdon Karl Nicholas (9.2 ppg, 6 rpg).

“I think the experience helps us a lot because it's 68 teams, and I feel like a lot of people don't understand how hard it is to win a game, especially in March Madness,” senior forward Brison Gresham said. “I think all the experience we have right now, it's a favor in our hands.”

Texas A&M-Corpus Christi (23-11) got in by winning the Southland Conference tournament. The Islanders are making their first NCAA Tournament appearance since 2007. Steve Lutz, a former Purdue assistant, got his team here in his first season as a college head coach.

The Islanders are led by Isaac Mushila, a 6-foot-5 junior forward averaging 13.5 points and 9.5 rebounds per game.

Texas A&M-Corpus Christi is the lowest-ranked team in the tournament based on KenPom ratings. The Islanders are 243 out of 358 teams. Texas Southern is slightly better, coming in at 188.

The winner will have the formidable task of taking on top-seeded Kansas in the Midwest regional on Thursday.

DAYTON IN THE SPOTLIGHT

Recently renovated UD Arena always rolls out the red carpet for the First Four because it's a high-profile event for the city and brings around $4.5 million in direct spending to the local economy.

This year, the arena, which seats about 13,400, is also hosting boys and girls high school championship tournaments. So counting the First Four, that's 28 games in 11 days with about 100,000 people attending.