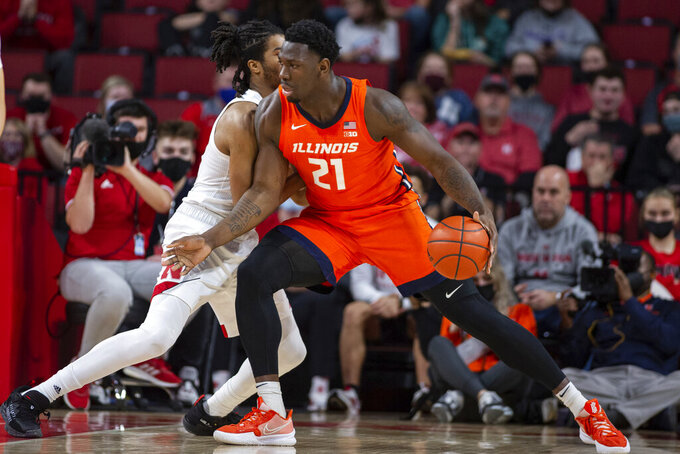 LINCOLN, Neb. (AP) — Once again Illinois got all it could handle during a visit to Nebraska.

Trent Frazier scored a season-high 29 points, Kofi Cockburn had his eighth straight double-double with 16 points and 13 rebounds, and the 25th-ranked Illini held off the struggling Cornhuskers for a hard-earned 81-71 victory Tuesday night.

“This is a game I’ve been concerned with for a long time,” Illini coach Brad Underwood said.

The previous time Illini came to Lincoln, last February, they went to overtime before winning 77-72. The time before that, in December 2018, they lost 75-60.

Frazier played in both of those games as well and, like Underwood, expected a challenge.

“Teams see a teams record and say they’re not good, but that is a really good basketball team," Frazier said. "That was the whole thing leading up to his game, preparing our mental focus, not looking at their record, not looking at the name on their jersey.

"They gave us a really good punch tonight and I’m glad our guys stuck to it and fought back and finished the game.”

Nebraska (6-11, 0-6) has lost nine of 10 and a program-record 21 straight against ranked opponents, the last 20 under third-year coach Fred Hoiberg.

“Our effort was phenomenal,” Hoiberg said. "I thought we fought them all the way until the end. Just have to execute it better at the stretch.”

The Huskers, who appeared to all but quit in the second half of a 93-65 loss at Rutgers on Saturday, wouldn’t fold against an Illinois team that has won 11 of 12 Big Ten road games.

Nebraska was up 12 points early and down eight late in the first half before going on a 13-0 run spanning the halves to take a two-possession lead.

The Illini clawed back and went up 51-47 on Coleman Hawkins' tip-in of Cockburn's miss and Frazier's layup. But they couldn't build on their advantage and Bryce McGowens' two free throws tied it 65-65 with under four minutes to play.

With Cockburn on the bench with four fouls, the Illini started to put the game away, leading 72-65 after Hawkins' third-chance putback, Omar Payne's dunk and Da'Monte Williams' 3.

McGowens led the Huskers with 19 points and Alonzo Verge Jr. and Derrick Walker had 14 apiece.

Nebraska, which came in shooting a Big Ten-worst 28% on 3s, made four straight from beyond the arc in the first four minutes while getting out to a 16-4 lead.

“They did exactly what I feared they were going to do,” Underwood said. “They've been struggling shooting the basketball — and they make their first four before the first media timeout.”

The Huskers cooled off in a hurry, missing 14 of its next 16 shots. Illinois began heating up, going on a 27-7 run with Cockburn scoring on a slick inside move to give the Illini their first lead and Alfonso Plummer and Frazier hitting 3s from the wing to make it 31-23 late in the first half.

But the Illini missed four shots and committed five turnovers while going scoreless the last 4 1/2 minutes of the half. Nebraska rattled off 11 straight points for a 34-31 lead at half, the first time in eight games against Power Five opponents the Huskers were up at the break.

Illinois: The Illini have won nine straight Big Ten regular-season games and 12 in a row including last year's conference tournament.

Nebraska: The Huskers have played some of their best basketball at home but again couldn't get over the hump. They haven't beaten a ranked opponent since March 2019.

“Maybe the coming out party for Omar Payne,” Underwood said. “I couldn't be happier for a young man who has worked so hard and stayed with it. He went a seven- or eight-game stretch where he didn't score but has kept grinding it in practice.”