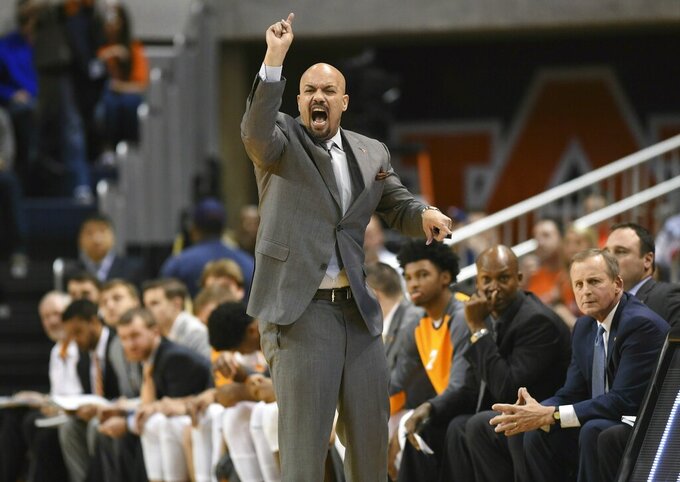 In this Jan. 2, 2016, photo, Tennessee associate head coach Rob Lanier shouts from the sideline during the first half of an NCAA college basketball game against Auburn, in Auburn, Ala. Georgia State has hired Tennessee assistant Rob Lanier to replace Ron Hunter as coach. Lanier was associate head coach for the Vols the last four seasons following four years with the same title on coach Rick Barnes' staff at Texas. (Adam Lau/Knoxville News Sentinel via AP)

Lanier was associate head coach for the Vols the last four seasons following four years with the same title on coach Rick Barnes' staff at Texas. Tennessee advanced to the Sweet 16 of this year's NCAA Tournament.

The Panthers lost to Houston 84-55 in the first round this year. Hunter led Georgia State to three NCAA appearances before he was hired to lead the Tulane program.

"This is a time of great transformation at Georgia State and I look forward to continuing to build on the reputation that our men's basketball program has established nationally," Lanier said in a statement.

Lanier, a cousin of NBA great Bob Lanier, is to be introduced at a campus news conference Tuesday.

Georgia State President Mark Becker lauded Lanier's ability to recruit and said he will "take Georgia State basketball to the next level."

"He has vast experience coaching in some of the nation's premier college basketball programs, and he has a deep commitment to developing players as students and athletes," Becker said.

Lanier has worked as an assistant or head coach for 11 teams that advanced to the NCAA Tournament. He played a role in signing nine McDonald's All-Americans.

Lanier had a record of 58-70 with one NCAA Tournament and one NIT appearance in four years as Siena's coach from 2001-05.