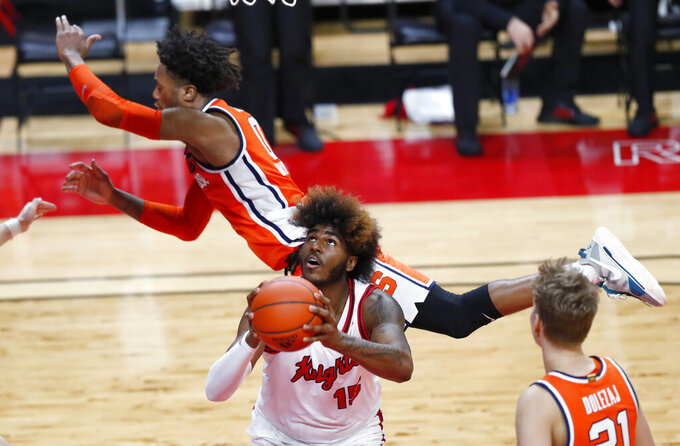 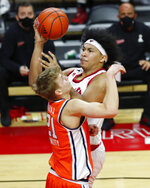 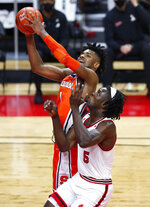 PISCATAWAY, N.J. (AP) — Faced with its first true test of the season, No. 21 Rutgers won with its nose to the grindstone in a workmanlike effort.

Ron Harper Jr. scored 26 points and the Scarlet Knights took over a close game down the stretch to beat Syracuse 79-69 on Tuesday night in the ACC/Big Ten Challenge.

“We’ve had to grind out games,” Pikiell said. “This was a 40-minute grind, and I’m pleased with my team they were able to grind it out.”

Montez Mathis added 19 points for Rutgers (4-0), and Jacob Young had 18. Myles Johnson finished with 11 points and 12 rebounds to help the Scarlet Knights snap a 13-game losing streak to Syracuse with their first victory over the Orange since January 2003.

The former Big East rivals were meeting for the first time in seven years.

After trailing 34-30 at halftime, Syracuse got within one several times early in the second half before tying it at 55 on a 3-pointer by Griffin assisted by Joseph Girard III.

Mathis hit a 3 on the ensuing possession, but Griffin’s dunk off Paul Mulcahy’s turnover put the Orange ahead 59-58 with 7:15 remaining for their first lead since it was 3-2.

“Our biggest problem is defensive. Guys shouldn’t be able to get layups,” Syracuse coach Jim Boeheim said. “I thought we made a really good move back at the end of the first half down 10 to get it to four. When we got up three, we still missed two transition plays. Just losing the ball in transition. You can’t do that against a really good team. We gave ourselves an opportunity to win and then we made two or three bad plays and then our defense broke down and their point guard got all the way to the basket and got two layups.”

Syracuse led for the next few minutes before Johnson’s fast-break dunk assisted by Young at the 4:10 mark gave Rutgers at 66-65 advantage. The play was part of an 11-0 run over 3:19 that put the Scarlet Knights in control and put away the Orange.

“We’re a resilient team,” Harper said. “We went up a lot against Syracuse, but they kept fighting back and they kept punching us right back in our face, and then we ended up being down three with like four or five minutes left, and we overcame adversity. I’m real proud of our team today, and we showed that we’re a bunch of fighters.”

Rutgers moved up three spots in the AP Top 25 without playing last week and figures to keep climbing with no more games remaining this week.

“We’re bigger,” Johnson said. “They’re going to be in the zone, so pretty much they have no crash responsibility, so we felt like we should win on the glass and we did.”

After the Niagara game, Boeheim said the player who tested positive was a walk-on and clarified that five players, including his son Buddy, would have to sit out because of contact tracing. Both exposures occurred off campus and his son would be out 14 days, Boeheim said.

Boeheim said after the game that his son Buddy would be back Saturday.

After opening the season with three games in five days, Rutgers hadn't played since Nov. 29. The team's next scheduled game is Monday, when Big Ten play begins at Maryland.

Rutgers and Syracuse played annually from 1995-2013 when both were members of the Big East. The previous Scarlet Knights victory in the series came on Jan. 29, 2003, just months before Carmelo Anthony and Syracuse won the national championship. Syracuse holds a 39-10 advantage overall.

Syracuse: The Orange were 3-0 for the first time since 2017-18, albeit Rutgers was their first real test. Undermanned due to COVID-19 protocols, Syracuse needs to get back to full strength heading into conference play.

Rutgers: So far, Rutgers has lived up to the hype in its most anticipated season in decades. The school was ranked in the preseason poll for the first time since 1978-79. By topping Syracuse, the Scarlet Knights earned a win over a brand-name program in the Power Five before heading into conference play.

Syracuse: Opens up ACC play at Boston College on Saturday.