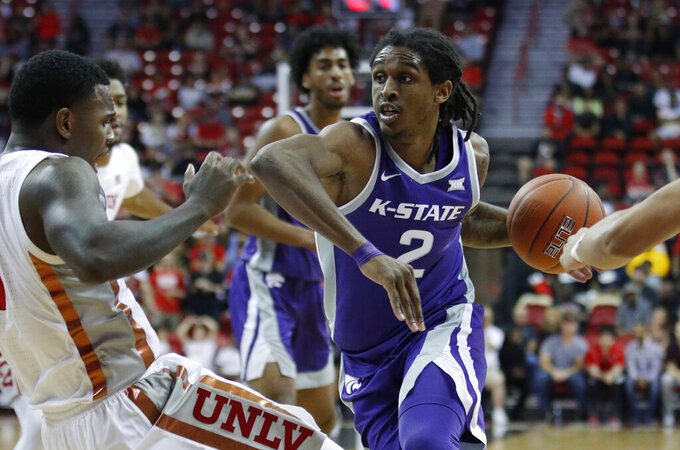 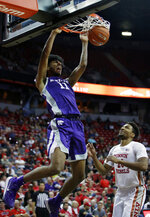 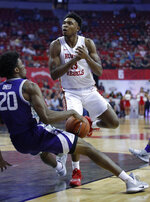 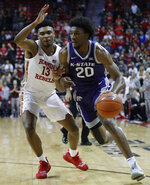 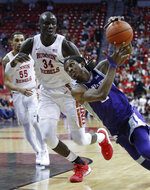 LAS VEGAS (AP) — As Xavier Sneed clutched his right ankle and writhed in pain on the floor in front of Kansas State's bench near the end of the first half Saturday and coach Bruce Weber was more concerned with his senior guard's long-term health just two games into the season.

Sneed started the second half, eventually buried back-to-back 3-pointers that tied the game, finished with 19 points including the game-winner in overtime, and Kansas State defeated UNLV 60-56.

"He's our senior, he's our go-to guy, obviously he has the most points, he guards the best players," Weber said. "He came back and he was huge."

Montavious Murphy gave Kansas State a 54-52 lead with 1:10 left in overtime when he drove the baseline, drew a foul and converted the free throw. UNLV's Amauri Hardy answered by dribbling around and through a pair of Kansas State defenders to hit a short jumper and tie the game at 54 with 44.2 seconds left.

But Sneed dropped in a mid-range jumper from the baseline to give K-State a 56-54 lead with :28 to play.

Mike McGuir and Sneed each drained two free throws in the final seconds to put the game out of reach.

"We had a tough shooting night in the first half, got it going, got some good, big time buckets from everybody," Sneed said.

The Wildcats overcame 37.3 percent shooting, as they hit just 22 of 59 from the floor, to erase a double-digit first-half deficit.

"Our guys just gutted it out," Weber said. "I thought our guys stayed together. We had a lot of guys make big plays; we finally got some stops without fouling in the second half. At the end we made some big shots, made some big stops and that's how you win games."

Hardy led UNLV with 27 points, while Elijah Mitrou-Long chipped in with 10 points and Cheikh Mbacke Diong had four points and 11 rebounds.

Kansas State's 19-10 run to start the second half, bolstered by Sneed's 3-pointers, triggered its comeback.

The teams traded baskets the rest of the way, with neither taking a lead bigger than three points until overtime.

"We gotta stay true to ourselves, gotta hang our hats on defense, not on offense," Hardy said. "If we continue to get stops we put ourselves in chances to have more offensive possessions. A couple of times we slipped up and let guys get to the paint. Easy drives, give up the baseline, which puts us in rotation and that's things we don't want to do."

"I was hoping we'd play little better, but we hung in there, we found a way to win (and) made the plays when it counted," Weber said. "Our guys learned about game plan, staying together, fighting, persevering; you can win games in different ways."

The Runnin' Rebels seized control of the momentum in the first half after falling behind 4-0 early, using a 14-0 run to open a 10-point lead. Hardy led the charge with UNLV's first 10 points of the game, including a pair from behind the 3-point line.

Outside of Hardy's outburst for UNLV, neither team was impressive offensively, often showing signs of sloppiness to the tune of 23 first-half turnovers combined.

The Wildcats took advantage of UNLV's miscues and stormed back with runs of 6-0 and 12-4 to get within two, at 18-16. But it was UNLV's domination on the boards that helped it close the half with the last two buckets, including Hardy's third 3-pointer to that point, giving the Rebels a 23-16 lead at the half.

UNLV outrebounded the Wildcats in the game 43-37.

"They're one of the best defensive teams in the country," Otzelberger said. "We probably need more ball movement, but they're a top five defensive team in the country. It's really impressive to hold a Big 12 champion program we have a lot of respect for to 16 first half points. We have to do better coming out and starting the second half."

Kansas State: The Wildcats are coming off a 25-win campaign and a loss to UC Irvine in the first round of the NCAA tournament. And while they were 7-5 in true road games last season, they were 0-3 vs. non-conference foes. Coach Bruce Weber said he wanted to schedule a true road game early in the season so his young team could "grow up fast." It was the earliest non-conference road game in school history.

UNLV: Coach T.J. Otzelberger was looking for his players to match Kansas State's physicality with an aggressive approach in the second half, knowing the defending Big 12 champions liked to pressure the ball and disrupt offensive rhythm the length of the court while forcing teams into tough shots. The much bigger Wildcats outscored UNLV 44-33 in the second half and overtime.

TURNING POINT: While Sneed's back-to-back 3-pointers capped a 12-point burst to start the Wildcats in the second half, Murphy's baseline drive in overtime that drew a foul, and his ensuing made free throw, gave Kansas State the momentum it needed down the stretch.