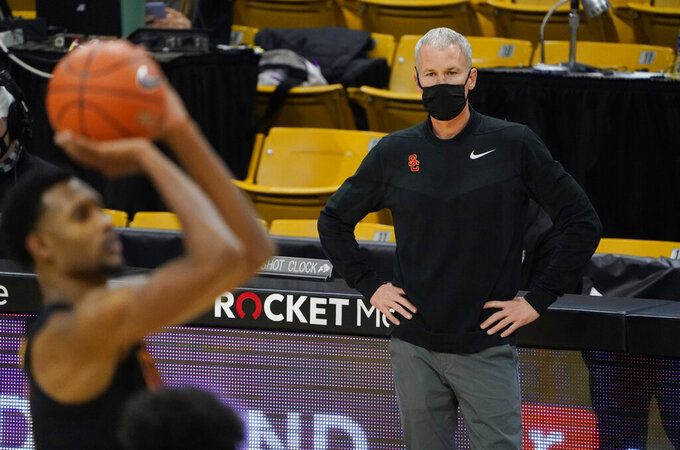 An opposing guard blows through the lane and launches a layup. Not so fast.

Evan Mobley comes in from the weak side, intent on blocking the shot. The 7-footer rises up and swats away the ball, leaving another potential scorer humiliated.

“I feel like I got to be aggressive to help my team win,” he said.

Mobley has morphed into one of the best big men in college basketball for Southern California, back in the NCAA Tournament for the first time since 2017. The sixth-seeded Trojans (22-7) face the winner of a play-in game between No. 11 seed Drake and Wichita State on Saturday in Indianapolis.

Much of their success can be attributed to Mobley. He’s parlayed a dominant freshman season into an expected top-five selection in this year’s NBA draft. USC’s highest draft pick so far has been O.J. Mayo, taken third in 2008.

“If you have one-and-done players, it’s very important that they help you win games,” coach Andy Enfield said. “Evan has just done an amazing job of buying into the team concept. He’s really improved throughout the season, offensively and defensively. He’s a much better player right now than he was just a month ago.”

Mobley is lean, long and explosive around the basket, with a 7-foot, 5-inch wingspan, but he can run the court as well. He’s skilled with the ball, too, making him dangerous from the perimeter.

Early in the season, most of his points came from dunks and layups. Once opponents began packing the paint against him, he moved out to successfully hit from mid-range and the 3-point line, where he shoots 31%.

Named to The Associated Press All-America second team, Mobley recorded a league-best 10 double-doubles while leading the Pac-12 in rebounding (8.6) and blocks (2.6). His 16.8 scoring average topped USC.

In the Pac-12 Tournament, Mobley scored a career-high 26 points in a double-overtime win against Utah and matched that total in a two-point semifinal loss to Colorado.

“I feel the spotlight on me a lot, but I’m just trying to stay focused and ready for the games,” he said.

Mobley became the first player in Pac-12 history to be named league player of the year, defensive player and freshman of the year, and just the second major conference player since Kentucky’s Anthony Davis in 2011-12 to claim those honors in a single season.

He's also not the only Mobley on USC's roster. His brother, Isaiah, is a sophomore averaging 9 points and 7.4 rebounds, with six double-doubles this season.

The brothers have a connection on the court that comes from knowing and playing with each other for years. But they're different. The 6-10, 235-pound Isaiah outweighs Evan by 20 pounds and is outgoing. Evan is reserved, and his always placid facial expression offers no clue as to how a game is going.

“That’s my personality. I never get too excited, never really down,” he said. “I’m usually mellow.”

Basketball is a family affair for the Mobleys. Father Eric and mother Nichol both played in college, and put basketballs in their sons' hands as toddlers. Eric is in Indianapolis sharing the NCAA Tournament experience with his sons as an assistant to Enfield, a position he's held since 2018.

Evan Mobley was ranked near the top of his national class for most of high school at Rancho Christian, a private school in Temecula, California. But he missed out on bigger hype when he couldn't play in the McDonald's All-American and Nike Hoop Summit games because of the coronavirus pandemic.

He's made up for all that in one season at USC, and now has a chance to boost the program's profile during March Madness before moving on.

“It’s a big stage and big players have to step up to the challenge,” he said. “Every game from now on could be our last game, so I’m going to treat it that way and just try to go all out.”