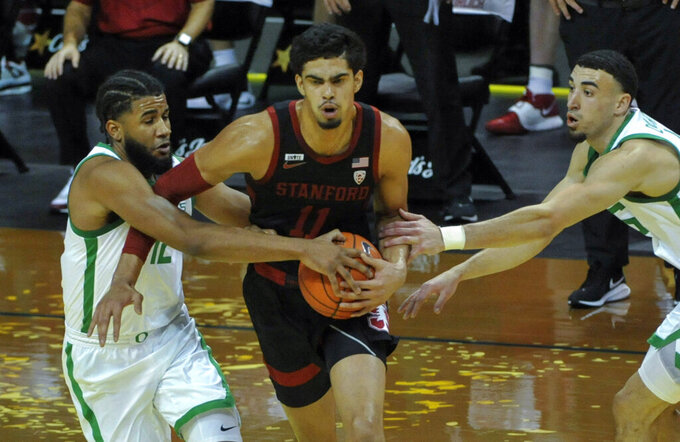 “It is always great to win games, but I think this team is great because we learn a lot from these wins,” Figueroa said. “We keep getting better game by game and are able to share the ball and talk on defense.”

Bryce Wills and Spencer Jones had 12 points apiece to pace the Cardinal (5-3, 1-1), who had their four-game winning streak snapped.

Stanford took a 46-45 lead on a basket by Wills with 9:45 to play before Omoruyi and Aaron Estrada hit consecutive 3-pointers for the Ducks.

“That’s what you expect your seniors to do,” Oregon coach Dana Altman said. “I thought Chris played well down the stretch and Eugene played well. That is what you hope for, guys to trust each other to make plays for each other.”

Oregon’s 28 straight home wins are the second-most in school history and tied for the second-longest active streak in the NCAA. Altman earned his 677th win to tie former Stanford and California coach Mike Montgomery for 23rd in Division I history.

Oregon was without freshman point guard Jalen Terry for the second consecutive game due to COVID-19 protocols. Oregon shot 42.4% from the field, but was 10 for 19 on 3-pointers in the second half.

Stanford senior guard Daejon Davis, who averages 13.8 points, 4.2 rebounds and 3.8 assists per game, missed his second straight due to a leg injury.

Stanford jumped out to an 11-3 lead before Oregon followed with nine points in a row to move into the lead.

Estrada put the Ducks ahead 16-15 before Stanford followed with a 10-2 run culminated by a 3-pointer from Jones to take a 25-18 lead. Oregon closed to 32-30 at halftime following a 3-pointer by Williams.

Stanford: The Cardinal have had six games either canceled or postponed due to COVID-19 and had to relocate to Santa Cruz due to restrictions in Santa Clara County. After Thursday’s game at Oregon State was postponed, it was rescheduled for Monday.

“We know this is how it's going to be, quick turnarounds, especially with COVID," Wills said. “Road warriors has been a theme for us.”

Oregon: The Ducks have won eight straight games despite battling injuries that left them with a seven-man rotation against the Cardinal.

Stanford: The Cardinal visit Oregon State at noon on Monday.