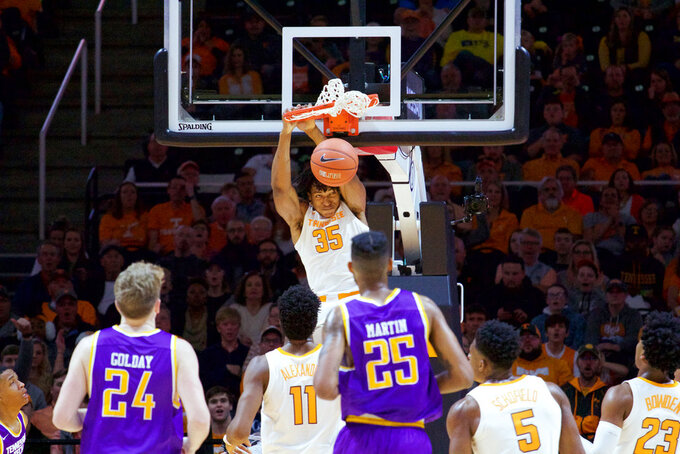 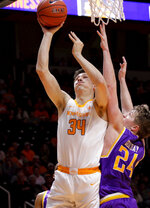 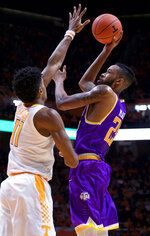 Grant Williams scored 25 points and went 10 of 11 from the floor as the third-ranked Volunteers trounced Tennessee Tech 96-53 on Saturday for their seventh straight overall victory and 16th consecutive home win.

It's the final nonconference tuneup for Tennessee (11-1) before SEC competition starts next weekend by hosting Georgia.

"What we've done up to this point now, you can throw it out because we're getting into conference play and we know what kind of grind that is," Tennessee coach Rick Barnes said.

Tennessee shared the SEC regular-season title with Auburn last year despite being picked to finish 13th out of 14 teams.

The expectations are much higher this year.

Tennessee's only loss of the season was an 87-81 setback against No. 5 Kansas in the NIT Season Tip-Off on Nov. 23. Tennessee hasn't fallen at home since a 94-84 loss against Auburn last season on Jan. 2.

"They're as good as anybody in the country," said Tennessee Tech coach Steve Payne, whose team also lost to No. 8 Michigan State and No. 14 North Carolina. "You're not going to find a team better."

Tennessee believes it still has plenty of room for improvement.

"We're a really good offensive team when we do what we're supposed to do, but I think we need to take that next step defensively as a team," said Tennessee's Jordan Bone, who had 16 points, 10 assists and only one turnover.

Tennessee's offense couldn't have been much better Saturday.

The Vols shot a season-high 63.8 percent (37 of 58), aided by 12 dunks. Tennessee was shooting above 70 percent before missing seven of its last eight attempts.

Tennessee Tech entered the day having won three of its last four games, but the Golden Eagles continued their road struggles on Saturday. They've lost all seven of their road games by an average of 29.4 points.

The Golden Eagles' only single-digit road defeat was a 73-68 loss at Kennesaw State on Dec. 15.

Tennessee Tech: The Golden Eagles executed well on offense but couldn't slow down Tennessee. Then they ran out of gas and missed 17 of their last 18 shots. Tennessee Tech is hoping its fortunes will improve as Malik Martin works his way back to peak form. The South Florida graduate transfer missed the first nine games of the season after undergoing hand surgery. He shot 3 of 13 and scored six points on Saturday.

"He's our most talented guy," Payne said. "He's a guy that has the talent to play in games like this. Today he didn't look like it, but he's also fresh off an eight-week layoff."

Tennessee: The Vols had a season-high 12 blocks and matched a season high with 10 steals, but those figures are somewhat misleading. Tennessee Tech was shooting over 50 percent for the game early in the second half before the Vols turned up their defensive intensity. If there's one concern coming out of this lopsided victory, it's that Tennessee must play quality defense for 40 minutes.

The most encouraging element for Tennessee was Fulkerson's performance.

Fulkerson played well early in his freshman year but dislocated his right elbow and fractured his right wrist in December 2016 and hasn't been quite the same. He also underwent surgery to repair a torn labrum in May 2017.

This game was just the second time Fulkerson scored in double figures since the start of the 2017-18 season. The 6-foot-9 forward reacted to his breakthrough performance by shifting the attention to his teammates.

"It feels good finally to see all the hard work that we've all put in, just to see all of our success," Fulkerson said.

In the poll released Monday, Tennessee was just one point behind Michigan for second place, with Duke at No. 1. Tennessee's chances of moving up to the No. 2 spot likely depend on how Michigan fares Sunday against Binghamton.