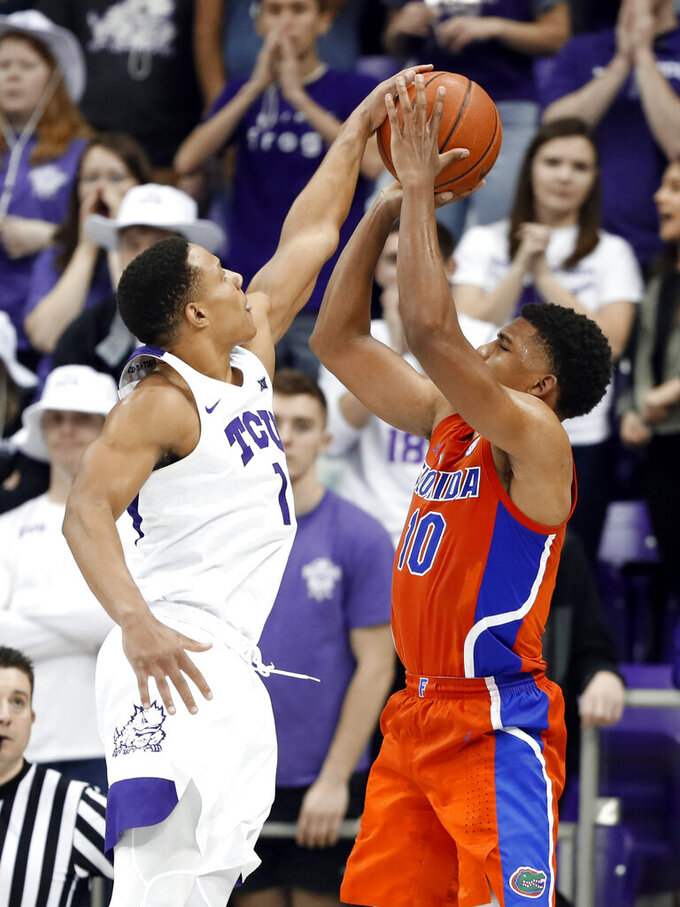 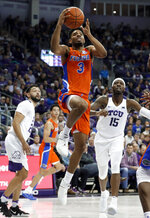 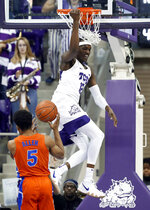 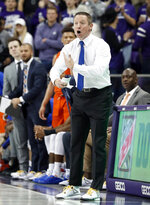 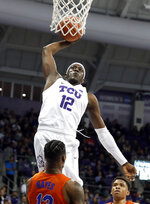 FORT WORTH, Texas (AP) — TCU never trailed after Kouat Noi scored the game's first seven points. When Florida got even in the second half after a horrendous start and bad shooting day all around, the lanky forward for the Horned Frogs put them ahead to stay.

Noi finished with 22 points, outscoring the Gators all by himself for most of the first half, and TCU held on to win 55-50 in the SEC/Big 12 Challenge on Saturday.

"Being able to win ugly has been something we struggled with in the past, so we've won a couple close games, which is huge for us and our program," said Desmond Bane, whose 17 points included four free throws in the final 22 seconds.

The Frogs (15-4), who scored only 23 points with 12 turnovers after halftime, had their lowest-scoring victory in coach Jamie Dixon's three seasons. It came three days after what had been the lowest this season, 65-61 over Texas.

"Yeah, it was only 55 of them, so pretty much all (points) were at good times. We didn't have any to spare," Dixon said. "We loaded up a bunch early, but it didn't finish out that way."

"A lot of TCU D, and lack of poise by us, lack of execution. Played rattled really and dug ourselves a hole, and then played more rattled and the hole got bigger," coach Mike White said. "Very tough start, too hard to overcome on the road in the Big 12."

KeVaughn Allen, coming off a game when he had eight 3-pointers, finished with 11 points for the Gators.

Florida tied the game for the first time at 34-34 on a 3-pointer by Andrew Nembhard, who then had a bounce pass to Kavarrius Hayes for a layup for a 36-all game. But Florida then went almost five minutes before scoring again.

Noi made a tiebreaking layup and then a 3-pointer from the right corner, at almost the same exact spot from where his cousin, Lat Mayen, then hit a 3.

"The first couple points started the momentum for the whole team, and everyone was looking for each other," Noi said. "I give credit to my teammates for finding me when I was open."

Noi outscored the Gators until Jalen Hudson's 3-pointer with 6:52 left in the first half got the Gators within 20-11. Noi had 11 points then, and Florida didn't have more until its next basket more than three minutes later.

Florida: This was the Gators' first loss in four SEC/Big 12 Challenge games with White as their coach. They were back in North Texas, where last March they played in the NCAA Tournament.

TCU: The Frogs, 4-2 in the SEC/Big 12 Challenge, won their seventh consecutive home game despite shooting only 36 percent (18 of 50) and with only 10 assists.

"It's been an emphasis all throughout the year that we were going to have to win some games defensively," Bane said. "You only hope to make every shot, but if your defense is consistent, you'll be able to win games even if your shot isn't falling like today."

"I don't want to sound like it's all things we didn't do," White said. "TCU's really good defensively."

TCU plays its next two games on the road in Texas, on Monday night at Texas Tech and next Saturday at Baylor.