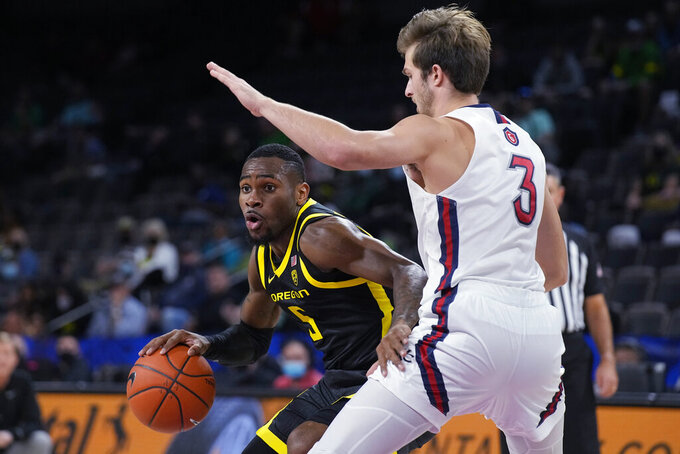 LAS VEGAS (AP) — As its West Coast Conference brethren, No. 1 Gonzaga, was preparing to face No. 2 UCLA from the Pac 12 about five minutes down Las Vegas Boulevard at T-Mobile Arena, unranked Saint Mary’s had its own plans of making a statement at Mandalay Bay.

Dan Fotu scored 16 points and Saint Mary’s defeated the Pac 12′s Oregon Ducks 62-50 on Tuesday in a semifinal of the Maui Invitational.

“I do think the WCC is up this year and you have five teams that are playing at a high level right now and some others that are pretty good,” Saint Mary’s coach Randy Bennett said.

Bennett’s Gaels (6-0) will face another Power 5 team Wednesday when they play Wisconsin in the championship game.

“I think college basketball’s about programs, I don’t think it’s necessarily about leagues,” Bennett added. “I think that’s a mistake people make. Right now we have some good programs in our league and that’s what makes our league good.”

The Gaels continue to look fantastic, as they got double-digit scoring from four players while hitting 52% (25 of 48) from the floor and controlling the flow for most of the game.

Tommy Kuhse had 13, Alex Ducas scored 12 and Logan Johnson chipped in 11 for the Gaels.

“We’re able to compete with anybody,” Johnson said. “It’s just putting our best foot forward and throwing the first punch.”

Oregon (3-2) was led by Eric Williams Jr., who had 13 points and 5 rebounds, his fourth straight game with double-digit scoring.

After falling behind by as many as 16 early in the second half, the Ducks finally showed some life, hitting 9 of 11 from the floor over a nearly seven-minute stretch to get within single digits at 48-40.

But as they did all night, the Gaels got timely buckets to stave off the Ducks, including an Alex Ducas 3-pointer to push the lead back to 11 with 7:46 left.

Saint Mary’s is one of three teams in Division I that returned every point scored last year. The Gaels faced reigning national runner-up and current No. 1 Gonzaga three times last season and certainly showed no fear staying in Oregon’s face on defense.

“We’ve been through some wars, and you go through those wars and you either get tougher or you get beat,” Bennett said. “And our guys, they can talk to each other in a way that a lot of teams can’t. They will hold each other accountable and it could be really direct.”

Neither team had productive numbers in the first half, but the Gaels played with better energy at both ends of the court. Oregon found no rhythm over the first 20 minutes and appeared to have no confidence in its shot selection, struggling to find high-percentage looks.

After trading baskets and falling behind 6-4 early, the Gaels went on a 15-7 run while keeping the Ducks out of sync.

After making their first three shot attempts, the Ducks went 4 for 24 over the final 17:09 of the first half. Oregon averaged 33.2 points in the first half through its first four games but trailed 23-15 at halftime in this one. Even worse for the Ducks, they were a meager 3 of 13 on dunks and layups in the first half.

Oregon’s biggest offensive threat, Will Richardson, went 0 for 5 and was scoreless Monday against Chaminade and was 0 for 3 in the first half against the Gaels.

And while multiple reserves set season-highs against Chaminade, and the Oregon bench scored 36 points Monday, it was Saint Mary’s bench with an 18-11 advantage on Tuesday, including a 10-0 edge at halftime.

Both teams had 13 turnovers, and Saint Mary’s outscored the Ducks 12-7 in points off turnovers. But Saint Mary had a 14-0 edge in fast-break points.

Saint Mary’s: The Gaels have out-rebounded their opponent in all six games this season, a combined 187-165 edge.

Saint Mary’s: Will play Wisconsin in Wednesday’s championship game of the Maui Invitational.

Oregon: Will play No. 12 Houston in Wednesday’s third place game of the Maui Invitational.