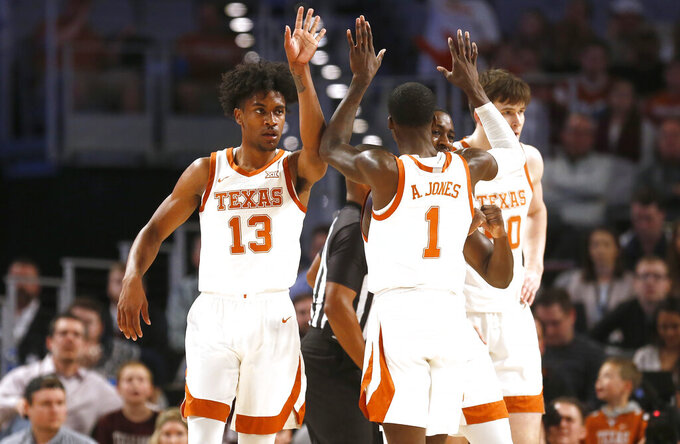 FORT WORTH, Texas (AP) — Texas guard Jase Febres might get one more chance to play Texas A&M before his college career is over. This was it for Aggies forward Josh Nebo.

Both agree it would be good for the longtime rivals to play every year.

Febres scored a season-high 17 points and the Longhorns beat the Aggies 60-50 on Sunday in their first meeting in four years and the second since Texas A&M left the Big 12 for the Southeastern Conference.

“It’s definitely good for both schools,” said Nebo, a senior who led the Aggies with 16 points. “Good for the state. Just a good college basketball game.”

The Longhorns (8-1) won for the sixth time in the past seven meetings after Texas A&M ended a five-game losing streak in the series with a victory at a tournament in the Bahamas in 2015.

It was the first meeting on Texas soil since Texas A&M joined the SEC in 2012, and the second game at the new Dickies Arena two days after TCU played the first one in the venue not far from its Fort Worth campus.

The next question is whether the schools pursue more neutral sites or go back on campus. There’s probably another consensus on that: home-and-home.

“I know they were talking about trying to reschedule one for Houston next year so like these neutral site games, I love it,” said Febres, a junior from Houston. “But I wouldn’t mind going to A&M, I wouldn’t mind being at home. I know that it’s going to be a crazy game to come out to.”

Before their split, the Longhorns and Aggies had been in the same conference since 1917, starting with the Southwest Conference before the switch to the Big 12 in 1995.

Emanuel Miller grabbed a game-high 14 rebounds and scored eight points for Texas A&M (3-5), in its first season with Texas native Buzz Williams as coach. Williams was an assistant with the Aggies when they were still in the Big 12.

“It would be different if we were playing at home or at their place,” Williams said. “I thought it was great. I thought the arena was great. I think playing them is great. I felt like it was a rivalry.”

Texas’ Andrew Jones was the game’s other double-figure scorer with 12. Courtney Ramey had seven assists to go with seven points.

The Aggies had just 17 points at halftime, trailing 27-17, while shooting 48% for the game. After Miller pulled Texas A&M within six with a bucket in the second half, Febres hit a 3 to start a 10-2 run that pushed the Texas lead to 14.

Texas A&M: The Aggies simply don't have much firepower, coming in with a leading scorer at 10.7 points per game (Savion Flagg, who scored eight). They'll have to compete with defense while Williams tries to rebuild the program.

Texas: The heavy emphasis on 3s was a bit of an aberration for the Longhorns, who came in attempting about twice as many shots from the inside the arc. The numbers were significantly tilted toward the 3 before balancing out late.

The renewal of the rivalry had already been worked out before Williams was hired. He’ll want a say in any return to what will also be the primary venue for the Fort Worth rodeo.

“I’m disappointed, if we ever play here again, they said George Strait was in concert to open the arena. They didn’t give me tickets,” Williams joked. “We’re not signing a contract to play at Dickies if I don’t get tickets to see George.”

Jones played in a game close to home for the first time since returning from treatment for leukemia. His high school is in Irving, between Dallas and Fort Worth.

“This was a game I knew I had a lot of family that was going to come out and support me,” Jones said. “They come to a lot of the home games too but this one was special because it’s not too often that I can come home and play and be in front of a home-based crowd.”