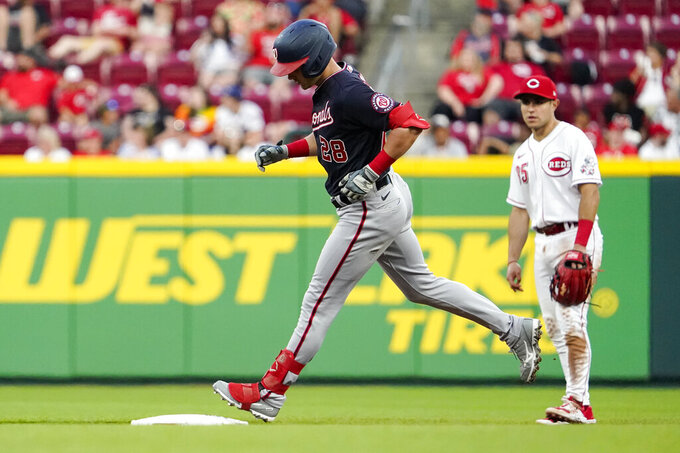 Washington Nationals' Lane Thomas (28) rounds second base after hitting a solo home run during the fifth inning of the team's baseball game against the Cincinnati Reds on Friday, June 3, 2022, in Cincinnati. (AP Photo/Jeff Dean)

CINCINNATI (AP) — Lane Thomas had his first career three-homer game, and Nelson Cruz and Juan Soto also went deep leading the Washington Nationals to an 8-5 win over the Cincinnati Reds on Friday night.

Thomas became the first Nationals player to hit three homers in a game since Kyle Schwarber on June 20, 2021, against the New York Mets. He had only three home runs in 123 at-bats.

“It was awesome,” the 26-year-old Thomas said. “Definitely a first for me. It was a good night for the team, too. Just glad we got the win and it actually mattered.”

Thomas had a two-run homer in the third inning and solo shots in the fifth and seventh, lifting his season total to six, one shy of his career high. He has 18 career home runs.

Thomas’ bid to become the first Nationals player, and the 19th in MLB history, to hit four home runs in a game ended in the eighth when he flew out to centerfield.

“Everybody (in the dugout) was like, ‘You gotta try to hit four, why not?’” Thomas said. “I hit three fastballs. I figured I was going to get a slider. I didn't do anything with it. I tried.”

Joey Votto hit a three-run homer for Cincinnati in the eighth and tied Johnny Bench for fourth on the franchise's all-time hits list with 2,048. Tommy Pham also homered for the Reds.

The Nationals spoiled the debut for veteran left-hander Mike Minor, pitching for the first time since the Reds acquired him from the Kansas City Royals in March.

Minor, traded to Cincinnati in exchange for left-handed reliever Amir Garrett, started the season on the 10-day injured list with a left shoulder strain. The start was Minor's first since Sept. 8, 2021.

After needing just eight pitches in a perfect first inning, Minor allowed a solo homer to Cruz leading off the second.

Nationals center fielder Victor Robles appeared to rob Pham of a two-run home run with a leaping catch over the wall in the first, but the ball bounced out of Robles' glove, giving the Reds a 2-0 lead. It was Pham's sixth homer of the season.

Minor (0-1) ran into trouble in the third, allowing back-to-back homers to Thomas and Soto. Thomas' two-run shot followed an RBI double by Robles, and the Nationals led 5-2.

“That was the message today, let's start swinging the bats,” Nationals manager Dave Martinez said. “Be aggressive in the strike zone and that's what we did.”

“I feel good,” Minor said. “I threw some bad pitches and some good pitches. They hit them both. I guess some fastballs leaked over the plate a little bit. I didn’t mix pitches well either."

Thomas' homer in fifth came off Vladimir Gutierrez and his poke in the seventh came off Jeff Hoffman.

The Knoxville, Tennessee, native had several family members and friends in the stands, including his father and fiancee to witness his big night.

“He was very aggressive, which we like,” Martinez said. “He's a fastball hitter. When he gets the ball in the zone with the fastball, slider, he hits the ball hard. It's tough to get three different pitchers and hit the ball the way he did. Needless to say, he'll be batting second tomorrow.”

The Reds hadn't allowed a three-homer game since the Dodgers' Adrian Gonzalez on Aug. 22, 2016. Only the Oakland A's and Tampa Bay Rays had gone longer without having an opposing batter homer three times.

Nationals right-hander Josiah Gray (6-4) allowed one earned run in six innings and struck out nine. Tanner Rainey pitched the ninth for his sixth save.

“Hats off to the offense to get me out of that hole early,” Gray said. “Then Lane on top of it, to have three home runs, it's fun to watch.”

Since starting the season 3-22, the Reds have gone 15-11, the sixth-best record in baseball during that span, third-best in the NL.

Friday was National Gun Violence Awareness Day and during pregame warmups players from both teams and the grounds crew wore T-shirts with “ENOUGH” on the front in large orange capital letters. “We think it is important that we get involved with what’s going on in our country, and this is where this T-shirt comes from,” Martinez said.

Nationals: LHP Josh Rogers was placed on the 15-day injured list on Friday with a left shoulder impingement. RHP Andrés Machado was recalled from Triple-A Rochester to replace Rogers on the roster.

Reds: LHP Justin Wilson had surgery on Friday to repair the torn ulnar collateral ligament in his left elbow. ... 2B Jonathan India is scheduled to have an MRI on Monday to determine how well his strained right hamstring is healing.

Reds RHP Tyler Mahle (2-5, 5.53) will make his 12th start of the season. All three of his quality starts this season have come in his past four starts. Nationals RHP Erick Fedde (3-4, 4.60) has lost two of his last three starts.