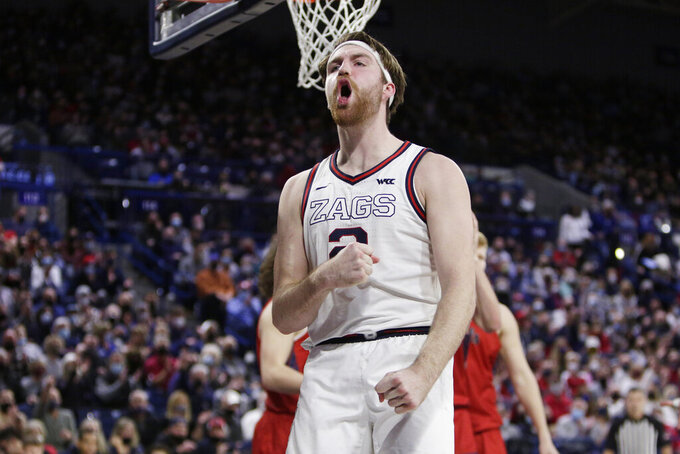 SPOKANE, Wash. (AP) — Second-ranked Gonzaga has been blowing out West Coast Conference opponents by an average of more than 30 points, but that wasn't going to be the case against No. 22 Saint Mary's.

“It was a grinder game,” Gonzaga coach Mark Few said. “I assume the rest of our games will be like this.”

Timme said it was “a good game for us going into March.” A candidate for player of the year, Timme made 11 of his 16 shots, and added five assists and a block in his best game in several weeks.

“I think I'm a pretty efficient player,” he said. “I'm getting my swagger and confidence back and it felt real nice.”

Julian Strawther hit a pair of 3-pointers in the closing minutes after Saint Mary's had cut Gonzaga's lead to single digits. Andrew Nembhard added 16 points and Chet Holmgren had 11 points and 13 rebounds for the Zags (21-2, 10-0 West Coast Conference), who have won a nation-leading 66 consecutive home games.

“Andrew was spectacular tonight,” Few said, pointing to seven assists, eight rebounds and no turnovers from his point guard.

Tommy Kuhse scored 16 points and Matthias Tass had 14 for Saint Mary's (20-6, 8-3), which is ranked for the first time this season. But the Gaels ended up with two losses (Santa Clara on Tuesday and Gonzaga) and a win (San Diego on Thursday) for the week.

Alex Ducas added 12 points for the Gaels, who were hurt by 39% shooting.

Saint Mary's slowdown offense threw the Zags off in the early going, and the Gaels led 12-11 nine minutes into the game. But the Zags put together a 15-4 run, with nine of the points by Timme, to take a 26-16 lead.

Tass got Saint Mary's within nine, 65-56, with 4:21 left as the Zags went five minutes without a field goal. But a pair of 3-pointers by Strawther gave Gonzaga a 74-58 lead with a minute left.

“Those 3s by Julian were obviously huge,” Few said, adding that Saint Mary's is “tough, hard-nosed, hard to score on.”

“We battled with the No. 1 team in the country and I would've liked to see a little better offense from us, especially towards the end when they were putting the game out of reach,” Bennett said.

With top-ranked Auburn losing to Arkansas earlier this week, the door is open for the Zags to return to No. 1 in the AP Top 25 poll on Monday. Saint Mary's will likely drop out.

Saint Mary's: The Gaels, who are second in the WCC, have consistently been one of Gonzaga's biggest rivals. But they have lost seven straight to the Zags ... The Gaels came in ninth in the nation in scoring defense, allowing 59.1 points per game.

Gonzaga: The Bulldogs have won 31 consecutive conference games, dating to a loss at BYU in 2020. ... Their home-court winning streak dates back to 2018. ... Gonzaga leads the nation in scoring at 90.8 ppg, and all five starters average in double figures.

Gonzaga: At Pepperdine on Wednesday before wrapping up its home schedule against Santa Clara on Saturday.