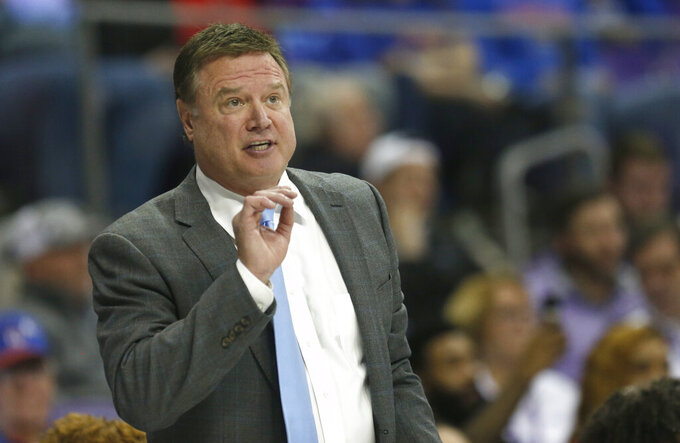 FILE - In this Feb. 8, 2020, file photo, Kansas head coach Bill Self reacts as Kansas plays TCU during the second half of an NCAA college basketball game in Fort Worth, Texas. The NCAA transfer portal was implemented two years ago, intended to help ease the burden on administrators, increase transparency and empower athletes who complained about being prevented at times from going elsewhere. “There’s a lot of juggling that has to take place because of the transfer portal,” said Kansas coach Bill Self, who lost elite guard Isaac McBride to Vanderbilt but enjoyed the benefit of getting sharp-shooter Isaiah Moss from Iowa this past season. (AP Photo/Ron Jenkins, File) 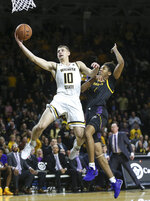 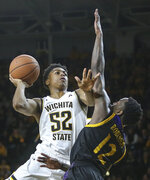 WICHITA, Kan. (AP) — Gregg Marshall began his career as an assistant at tiny Randolph-Macon and Belmont Abbey, but it was during eight years on the staff of Hall of Fame coach John Kresse at College of Charleston that he learned to build a basketball program.

Marshall learned how to recruit players who fit his style. He learned how to find overlooked gems, guys who were still growing or had yet to discover their shot. He learned how to sit in their living rooms and convince moms and dads that their sons would get a good education and in four years be prepared for the real world.

Many of those lessons have helped Marshall become Wichita State's winningest coach. But many have lost their value, and the reason is simple: The NCAA transfer portal has forced coaches to build teams rather than programs.

The system was implemented two years ago, intended to help ease the burden on administrators, increase transparency and empower athletes who complained about being prevented at times from going elsewhere. But in the eyes of many coaches, the portal has made transferring too easy, giving players an easy out for any reason: amount of playing time, location, level of competition, even something as silly as school colors.

“It's created a system in which, when problems arise, (players) are not going to fight through the problems and adversity," Marshall said. "You're going to make a move. It's going to be easy to do. That's the problem I see with it.”

The Shockers went 23-8 and spent much of last season hanging around the Top 25, and they were likely to receive an at-large bid to the NCAA Tournament had it not been canceled. Fast forward a few weeks and Marshall is wondering how he might need to replace seven players who placed their names in the transfer portal.

They run the gamut from high-scoring guard Erik Stevenson, who has committed to Washington, and talented freshman Grant Sherfield, who is headed to Nevada, to role players that hardly saw the floor. But together, they left Marshall with a roster full of holes that he must plug even while the coronavirus pandemic has put the brakes on recruiting.

So much for those lessons he picked up from Kresse back in Charleston.

More than 500 names have been entered into the portal in the month since the season ended, and new names are added by the day. Some come from big-name programs in search of a fresh start, others from small schools with something to prove. Many are graduate transfers who can play immediately, though most will have to sit out a year under NCAA transfer rules.

“You have to respect each young guy’s decision because that’s the culture we live in today,” Missouri coach Cuonzo Martin said. "You have guys leaving teams. That’s just the way it is. But when you’re talking about freshmen, they have to have the opportunity to play from Day 1 or you’ll be looking at a lot of this.”

No brand of school is unaffected, either.

Johnny Juzang and Kahlil Whitney jumped into the portal after their freshman seasons at Kentucky, and Alex O'Connell made the move after his junior year at Duke, creating holes for the bluest of blue bloods. Some Power Five programs such as Iowa State, with five players in the transfer portal, have begun to resemble a bus stop with players coming and going.

Then there are the mid-majors such as George Washington, which likewise watched five players enter the portal — four have already found new homes. In a bit of symmetry, the Colonials have filled three of those scholarships with transfers of their own from Southern Miss, LSU and Vanderbilt.

Low-majors are often the hardest hit because one or two star players can make a program, and their departure can be crippling. Terrell Brown averaged 20.7 points per game for Seattle but will be playing for Arizona next season. Jordan Bruner entered the portal after leading Yale to the Ivy League title. Dimencio Vaughn parlayed an All-MAAC season at Rider into a final season with Ole Miss.

“There’s a lot of juggling that has to take place because of the transfer portal,” said Kansas coach Bill Self, who lost elite guard Isaac McBride to Vanderbilt but enjoyed the benefit of getting sharp-shooter Isaiah Moss from Iowa this past season. “I think that recruiting is more of an inexact science right now than it ever has been.”

Not every coach believes the transfer portal has become a problem.

Some of them point to the hypocrisy of coaches being able to freely change schools while players have long been locked into scholarships, and the fact that the transfer portal has created a level playing field where everybody can have a shot at a player interested in new surroundings. Those adept at landing high-profile transfers often have benefited, too.

Marshall himself took advantage of the transfer portal to land Connecticut transfer Alterique Gilbert and could be in the market for another player or two.

“The biggest thing for coaches as this transfer portal takes on a life of its own, you're not building a program anymore. I don't know anybody who can do that,” Marshall said. “It's hard for us to do that because you're building a team every year.”