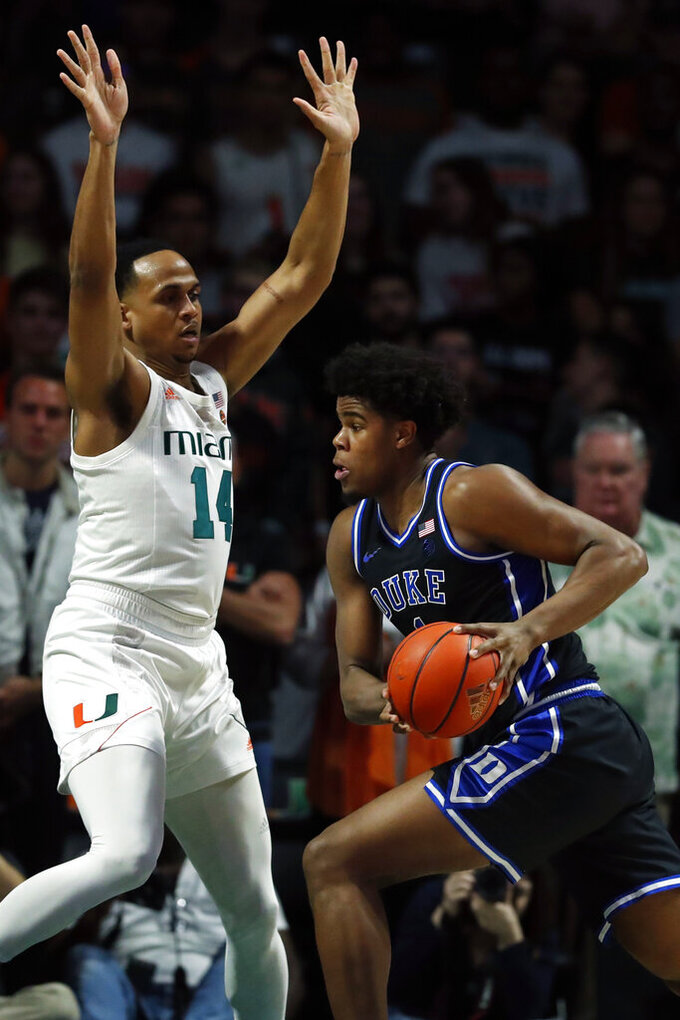 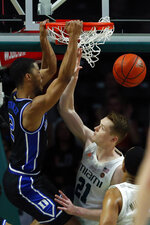 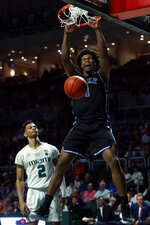 CORAL GABLES, Fla. (AP) — The backboard was still shaking when Vernon Carey Jr. reached the other end of the court after his thunderous dunk in garbage time punctuated Duke's latest rout.

Carey rocked his hometown Saturday night, scoring 24 points in 25 minutes, and the second-ranked Blue Devils shot a season-high 60% to beat the Miami Hurricanes 95-62.

It was Miami's most lopsided home loss in Jim Larranaga's nine seasons as coach.

Carey shot 11 for 14 playing against Miami for the first time, and every basket drew cheers from a substantial portion of the less-than-capacity crowd. The Blue Devils freshman starred in high school in nearby Broward County, and his father played football for the Hurricanes.

“It was special just to come out here and get our second ACC road win,” Carey said. “We played great, especially on the defensive end.”

“It's not just tonight returning home — he has been extremely poised,” Krzyzewski said. “That's the thing I'm most proud of him. Even if he made a mistake, or missed a shot, he doesn't get frantic.”

The Blue Devils (13-1, 3-0 Atlantic Coast Conference) won their seventh game in a row.

“They're really good,” Larranaga said. “Their speed, quickness, jumping ability, and level of intensity — I think they've got a legitimate shot to win the national championship.”

Miami (9-4, 1-2) had a five-game winning streak snapped and lost for the first time since November.

“Coach has been stressing to be efficient with your drives and look to kick,” Stanley said. “We were getting good shots early in the season. We’re getting great shots now.”

The Blue Devils scored 64 points in the paint against the Hurricanes, who played mostly zone.

“Our spacing was good, and our passing stretched everything out,” Carey said.

Carey had nine rebounds to lead the Blue Devils, who outrebounded Miami 41-24. Their defense put the clamps on Chris Lykes, Miami's leading scorer this season. He shot 2 for 15 and totaled eight points.

“We played very, very well,” Krzyzewski said. “Not very well — two verys. When went to the bench, we didn't drop. In fact, we ascended.”

Kameron McGusty led the Hurricanes with 12 points but had six turnovers.

The Hurricanes paid the price for losing the recruiting battle for Carey, who was in eighth grade when Larranaga began courting him.

“I love Vernon Carey and his family,” Larranaga said. "We recruited him very hard. My hat's off to him. He keeps working hard. I think he's got a legitimate shot of being ACC player of the year, national player of the year. He's really good."

Miami hung with Duke early and trailed 23-20 midway through the first half. But the Blue Devils made 11 of their final 13 shots before halftime, including Hurt's 3-pointer to beat the buzzer ending the half for a 50-36 lead.

The Blue Devils came into the game leading the nation in scoring margin at 20.8, and they've been especially dominant lately, with their past four wins by 29, 25, 39 and 33 points.

“Truth be told, we can't play at the pace they do,” Larranaga said.

Miami has 11 scholarship players, and lack of depth is an issue for the second season in a row. The Hurricanes trailed by 20 in the second half before their reserves produced a point.

“I think they got worn down,” Krzyzewski said.

Miami plays at No. 7 Louisville on Tuesday. The Hurricanes lost 87-74 when they met in the season opener.

Duke plays at Georgia Tech on Wednesday. The Blue Devils are 10-0 against the Yellow Jackets since 2010-11.