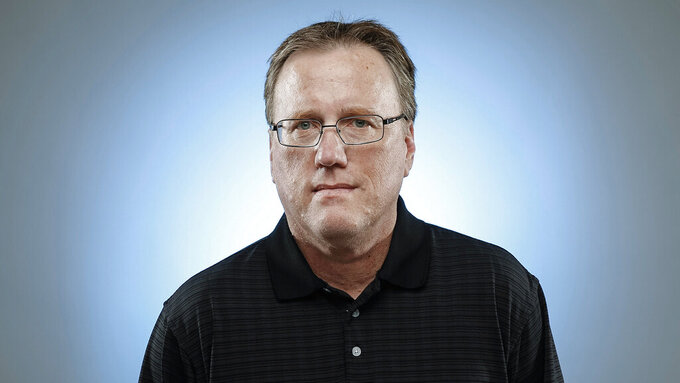 This undated photos shows former longtime Los Angeles Times sport writer Chris Dufresne. The award-winning former sportswriter for the Los Angeles Times has died. He was 62. He died suddenly Monday, May 25, 2020, while dining with his family at home in Chino Hills, 30 miles east of Los Angeles, according to a Times staff memo posted Tuesday on Facebook. (Los Angeles Times via AP)

LOS ANGELES (AP) — Chris Dufresne, an award-winning former sports writer for the Los Angeles Times, has died. He was 62.

He died suddenly Monday while dining with his family at home in Chino Hills, 30 miles east of Los Angeles, according to a Times staff memo posted Tuesday on Facebook.

“Chris had been awaiting the results for what appeared to be a late-stage melanoma recurrence,” the memo said.

Dufresne got a job working on the loading docks at the Times after graduating high school in 1976. His father worked in the newspaper’s transportation department for 37 years.

In 1981, he became a clerk covering high school sports at the Times’ Orange County bureau.

“He would shake his head like, 'How did my name end up in the paper? I'm supposed to be delivering it,''' recalled Steve Springer, a retired Times sportswriter and former colleague. “Everybody really respected him a lot.”

Dufresne continued rising at the paper, serving as national college football and basketball columnist from 1995-2015, when he accepted a buyout and left. In 2011, he was selected California Sportswriter of the Year by the National Sportscasters and Sportswriters Association.

“He was a good guy and had a national reputation as being an exceptional college football writer,” said John Nadel, a retired Associated Press sportswriter who worked many of the same games as Dufresne over the years.

“College football probably is the only thing I’m attached to as a writer,” Dufresne told Poynter.org. “I love it because it is all interconnected with every aspect of society and life. Everyone went to a school somewhere. There’s nothing else like it.”

Dufresne's last article was posted online May 7. In it he pondered how vulnerable he would be venturing out during the coronavirus pandemic, including to games once live sports returned. He wrote that he had rarely left his house since California's stay-at-home order began two months ago, noting that being older and immune-compromised he was in a group heavily affected by COVID-19.

“Gratefully, I’ve attended and covered enough great games to fill my life’s bucket list. I can still fulfill my professional obligations by reporting in my living room from “Panasonic Stadium,” Dufresne wrote. ”I don’t know if the NFL or college football will be back this season. I THINK so and truly hope so. But, as an Expendable, this might already be the end of us. No one is rooting harder for a vaccine than yours truly."

Blaudschun wrote in an online tribute that Dufresne had been scheduled to start treatment for the melanoma recurrence on Tuesday. They exchanged text messages Monday, and Dufresne wrote that he was “bracing for big weeks ahead.”

“In a business where egos can run amok, often far out distancing the talent level, Duf was the opposite,” Blaudschun wrote, using his friend's nickname. “He never over promoted or did much of self promoting. What he did do — better than most of us — was doing his job in a clear, entertaining fashion.”

Born in Fullerton, Dufresne grew up in La Habra and graduated from Cal State Fullerton in 1981 with a degree in journalism.

He is survived by wife Sheila and sons Drew, Daniel and Joey.