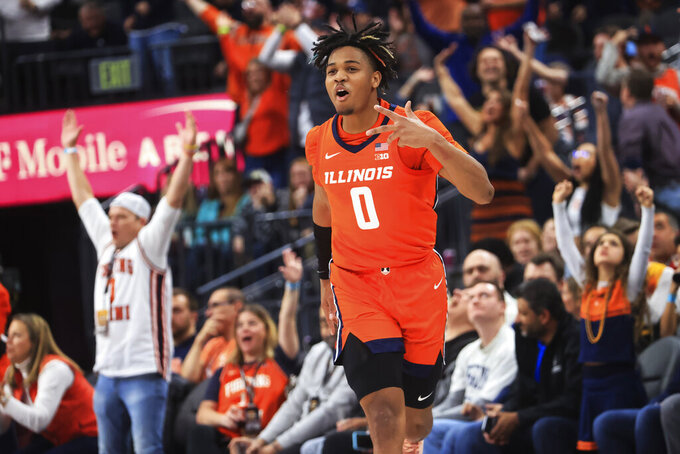 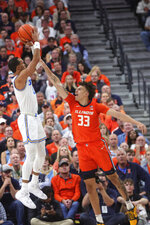 The Illini (4-0) will play No. 16 Virginia in Sunday's championship game of the Continental Tire Main Event. UCLA (3-1) faces fifth-ranked Baylor in the consolation game.

UCLA led 44-29 early in the second half, and the Bruins were in front by 10 points when Illinois went on a 22-6 run take a lead it never gave back to the delight of a heavily pro-Illini crowd.

“I'm really proud of this group,” Illinois coach Brad Underwood said. “Fifteen down, the eighth-ranked team in the country, a lot of unknowns, a lot of guys who have never been there, never done anything remotely close to what this was about. Now it was a home court for us. I will say that.”

Shannon, who said he was “in the zone the whole game,” shot 9 of 13 overall. Maybe the only area where he was struggled was at the free throw line, where he went 3-for-7. The Texas Tech transfer surpassed 1,000 career points.

He entered Friday's game as one of four players nationally to average at least 22 points, six rebounds and three assists. Shannon had three assists against the Bruins.

“He turned into Steph Curry when he got here,” said Illinois swingman Matt Mayer, who scored 11 points.

Tyger Campbell scored 22 points and Jaime Jaquez Jr. had 20 for the Bruins. UCLA led 37-28 at halftime and expanded the lead to 15 points on a 3-pointer by Jaquez less than two minutes into the second half.

Shannon then made a 3 to jump-start Illinois' rally, and by the time the Illini were finished, they had scored 51 second-half points.

UCLA coach Mick Cronin said he wished he had watched the game “as a fan." But he otherwise was critical of his team, saying his players were ready to hang “a banner because we beat Norfolk State.”

“I have no positive thoughts on any player on UCLA's performance, not one, including the coach,” Cronin said.

Beginning in 2024, UCLA-Illinois will be a conference game once the Bruins join the Big Ten, unless the University of California regents decide otherwise. They meet Dec. 14 to decide whether UCLA will join the Big Ten. ... This is the first meeting since the 1996-97 and 1997-98 seasons when the teams split their meetings, each winning on its home court. ... UCLA lost for the second time in a row at T-Mobile Arena. The Bruins also lost to Arizona 84-76 in last season's Pac-12 Conference tournament championship game. ... Illinois is the Big Ten's winningest team over the past three seasons with a combined conference record of 44-16.

UCLA: Five key players return from the Bruins team that went 27-8 last season and made the Sweet 16 of the NCAA Tournament. Those include Campbell and Jaquez, who each have more than 1,000 career points and last season were first-team All-Pac-12. To balance out the veterans, the Bruins have six freshmen, including two McDonald's All-Americans.

Illinois: The Illini added eight new players after last season, including three transfers from Power Five schools to go with a top-10 recruiting class. They had to make up the difference from losing all five starters from a team that won the Big Ten regular-season title. Illinois advanced to the second round of the NCAA Tournament each of the past two seasons.

The Illini face Virginia for the tournament title, while UCLA plays Baylor in a consolation game between teams ranked in the top 10.