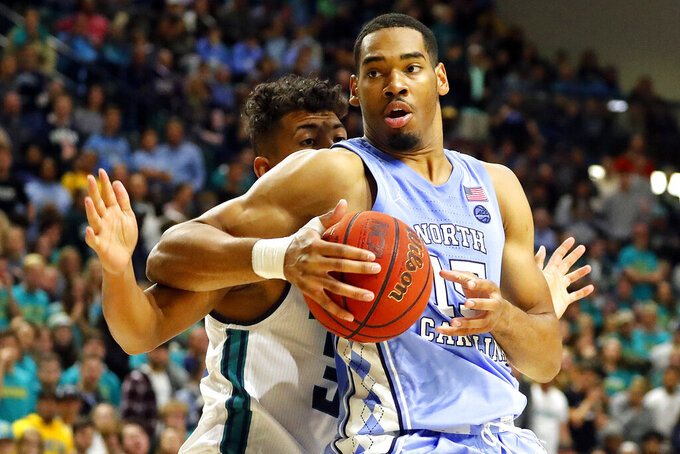 North Carolina's Garrison Brooks (15) battles for the ball with UNC Wilmington 's John Bowen (32) during the first half of an NCAA college basketball game in Wilmington, N.C., Friday, Nov. 8, 2019. (AP Photo/Karl B DeBlaker) 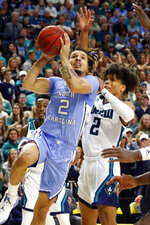 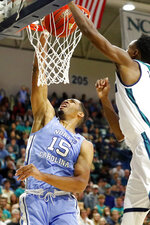 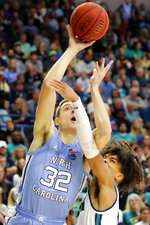 Anthony had 20 points and 10 rebounds to help North Carolina beat UNC Wilmington 78-62 on Friday night, though the Tar Heels had only three players carrying the load after managing only two double-figure scorers in the season opener.

Graduate transfer Justin Pierce and junior forward Garrison Brooks each had 18 points and 12 rebounds. That offset a bad shooting night for Anthony, who had 34 points in his college debut against Notre Dame on Wednesday night to set an Atlantic Coast Conference record for most points by a freshman in a college debut.

Yet the rest of the lineup hasn't produced much, and it's getting thinner due to injury concerns.

"You saw it right there, guys," Williams said. "We're not a very good basketball team if we've only got three guys that can make a shot."

The Tar Heels lost freshman big man Armando Bacot in the first half and were reduced to a seven-man rotation. The others in that group — starters Christian Keeling and Leaky Black, and reserves Andrew Platek and Brandon Huffman — combined to make 8 of 23 shots (34.7 and scored 22 points.

That came after Brooks managed 10 points in the only other double-digit output amid Anthony's opening-night show. This time, Anthony made just 7 of 24 shots but had three assists and four 3-pointers for the Tar Heels (2-0).

Shykeim Phillips and Jaylen Sims each scored 12 points for the Seahawks (1-1). They trailed 40-29 at halftime before UNC stretched the lead with a 10-0 burst.

"Obviously some guys can be disappointed in how they played because they didn't make some shots and maybe turned it over," UNC Wilmington coach C.B. McGrath said. "But their effort, they should all be proud of."

UNC: The depth is a concern, which magnifies the offensive imbalance. Williams said Bacot is being evaluated for a possible concussion after playing fewer than 3 minutes in the first half when he was inadvertently hit in the head while defending an off-balance shot. That came for a team already down senior Brandon Robinson with an ankle injury suffered in an exhibition game.

UNC Wilmington: The Seahawks were picked to finish ninth in the Colonial Athletic Association with a roster breaking in eight new players. They had a rowdy home crowd behind them for the first visit from a ranked team since January 1992 and their first visit from an ACC team since November 2009, but fell to 1-35 against ranked teams and 2-42 against the ACC.

North Carolina was making its first trip to the coastal instate school, the product of the Seahawks being coached by McGrath — who played under Williams at Kansas then worked under him at Kansas and UNC.

That created a sellout-crowd buzz and lines of students waiting outside of Trask Coliseum much of Friday ahead of the game.

"We understand it's because the Tar Heels were in town," McGrath said. "But it's a good atmosphere. I said, 'Hey, you guys need to put on a good show, you can have these guys come back every single game like this and make it a great atmosphere.'"

Pierce, who played at Trask while at William & Mary, had 13 first-half points. That included a 3 off a perfect crosscourt transition feed from Anthony that ended with Pierce holding his release as he started dropping back before the ball swished through the net.

"My teammates got me a bunch of open looks tonight," Pierce said. "I was a little confident going into the game knowing that I was familiar with this arena and this conference obviously playing here for three years."

UNC said Anthony is now the only freshman in program history to go for at least 20 points and 10 rebounds in consecutive games. ... Williams earned his 873rd Division I victory, tying Jim Calhoun for sixth all-time. ... The Tar Heels made just 16 of 30 free throws after making 10 of 17 against Notre Dame. ... UNC Wilmington made 5 of 28 3-pointers (17.9 after making 11 in its opener against Johnson & Wales.