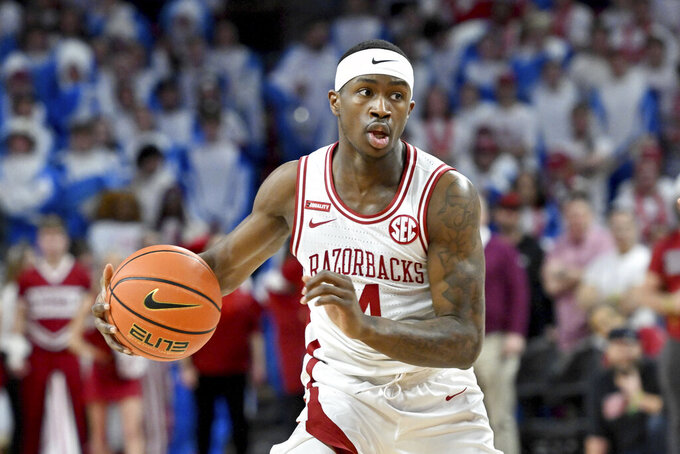 FILE - Arkansas guard Davonte Davis (4) against Kentucky during the first half of an NCAA college basketball game on Feb. 26, 2022, in Fayetteville, Ark. The Razorbacks open at home against North Dakota State on Nov. 7. (AP Photo/Michael Woods, File)

Coach Eric Musselman, heading into his fourth season in charge of the Razorbacks, has two returning players from last year’s rotation, only one of which is a starter in guard Devo Davis.

But he pulled in the No. 2 class in the nation, headlined by projected lottery pick and first-team preseason All-SEC guard Nick Smith Jr. He also picked up five players via the transfer portal to complete the reload.

Expectations aren’t just high locally, either. Arkansas was tabbed No. 10 in the AP Top 25. Musselman knew he would have to have that conversation with his team about being the hunted.

“We already have a target on our back,” he said. “I would love to say that whatever the polls say, making two Elite Eights back to back, that’s something we haven’t talked to our team much about, but it’s something we will start to.”

Musselman’s biggest project, at least early, is determining how best to distribute minutes among a roster filled with talented youngsters and experienced veterans. He had to do something similar last year, too, as Arkansas dropped five of six games at one point from mid-December to early January before the team won 14 of its next 15 and earned a No. 4 seed in the NCAA Tournament.

Arkansas isn’t short on next-level talent. Smith is a projected top-10 pick in nearly every 2023 NBA Draft board. Freshman guard Anthony Black is predicted to be a first-rounder. And swingman Jordan Walsh is currently listed as a borderline first-round choice next spring.

The Arkansas strength during the preseason was at guard and wing as the frontcourt remained a work in progress.

An NCAA Tournament appearance in 2022-23 would be the third in four years for Musselman. The Razorbacks were on the bubble in the 2019-20 season, Musselman’s first year at the helm, before the postseason was canceled because of COVID-19. Arkansas hasn’t made three straight NCAA tournaments since 2005-08.

Davis and forward Kamani Johnson are the only two regulars returning for Arkansas. Davis, a junior, has spent much of his career as the team’s starting point guard. He averaged 8.3 points and was second on the team with 104 assists last year, starting about half the team’s games.

Johnson is in his second year with the Razorbacks after transferring from Little Rock two seasons ago. He averaged just eight minutes ago in 26 games, but Musselman is expecting Johnson’s aggression to carry over in likely more minutes.