As Ben Johnson takes over, Gophers put the 'new' in new look 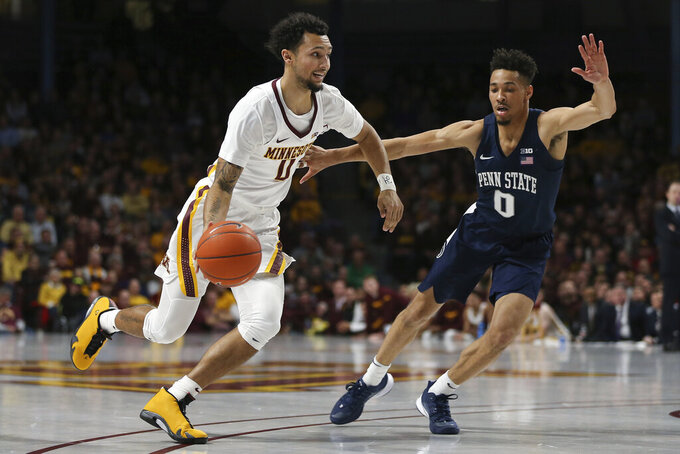 FILE - In this Jan. 15, 2020, file photo, Minnesota's Payton Willis drives the ball past Penn State's Myreon Jones during an NCAA college basketball game in Minneapolis. Willis is one of several transfers who joined new coach Ben Johnson’s team, after playing for Charleston last season. He was with Minnesota in 2019-20.(AP Photo/Stacy Bengs, File)

MINNEAPOLIS (AP) — New Minnesota coach Ben Johnson might have been wise to start the first practice with some get-to-know-you icebreakers before moving onto the shooting, passing and defense drills.

Johnson has been heavily emphasizing the team concept in the takeover of a program he's trying to revive 18 years after he finished playing for them.

There's no denying the importance of the names on the back of those maroon-and-gold jerseys this fall, though, because the fans are going to have to figure out who these guys are. The season opener is Nov. 9 against Kansas City.

Johnson spent the last three years as an assistant at Xavier, following five seasons under Pitino. He's a native of Minneapolis with strong recruiting ties to the state's rich talent, most of which has matriculated elsewhere in recent years. The Gophers will have to be patient for Johnson's local relationships to pay off.

For now, with the NCAA's relaxed transfer rules in full effect, Johnson and his staff just had to put together a roster with players who would appreciate being here rather than wincing about the inevitable growing pains in the daunting Big Ten.

“The good news is that I’ve got a lot of guys who are trying to prove themselves,” Johnson said.

Curry put off his plan to go into coaching and will suit up for a sixth season, thanks to the blanket eligibility waiver issued by the NCAA for 2020-21 due to the pandemic. His longtime friend, point guard Payton Willis, transferred back to Minnesota after playing last year at Charleston. Willis was the fourth-leading scorer in 2019-20 for the Gophers.

Jamison Battle (George Washington), Luke Loewe (William & Mary), Charlie Daniels (Stephen F. Austin), Eylijah Stephens (Lafayette) and Sean Sutherlin (New Hampshire) took the opportunity to play in a power conference after moving up from mid or low major programs. Danny Ogele and Parker Fox made the jump from Division II. There are six Minnesota natives on the team, including Battle, Sutherlin and Fox.

“They had a group chat going before they even got to campus,” Johnson said. “Once they set foot on campus, it was like they’d known each other forever.”

Freshmen Treyton Thompson and Abdoulaye Thiam will likely get plenty of playing time. Thiam played for a Florida junior college last season. The 6-foot-11 Thompson could start next to Curry in the frontcourt. Thompson, a Minnesota native, spent the last two years at an Indiana prep school.

Willis, Stephens and Battle are good bets for the starting backcourt, but Thiam, Sutherlin and the 3-point specialist Loewe ought to be in the mix, too. Daniels and Ogele figure to push Curry and Thompson for playing time in the post.

Fox can't play this season because of a torn ACL and meniscus in his left knee he suffered during a workout in April. The 6-foot-8 Fox was an NCAA Division II All-American in 2020-21 at Northern State University in South Dakota, where he averaged 22.3 points, 9.8 rebounds and 3.5 blocks. Fox has two years of eligibility remaining.

The schedule gets serious for the Gophers right after Thanksgiving weekend. They're on the road in the ACC/Big Ten Challenge this year, at Pittsburgh on Nov. 30. Another away game against a power conference opponent comes five days later at Mississippi State. Then looms a daunting dive into Big Ten play, against Michigan State on Dec. 8 and at Michigan on Dec. 11.

ON THE OTHER HAND