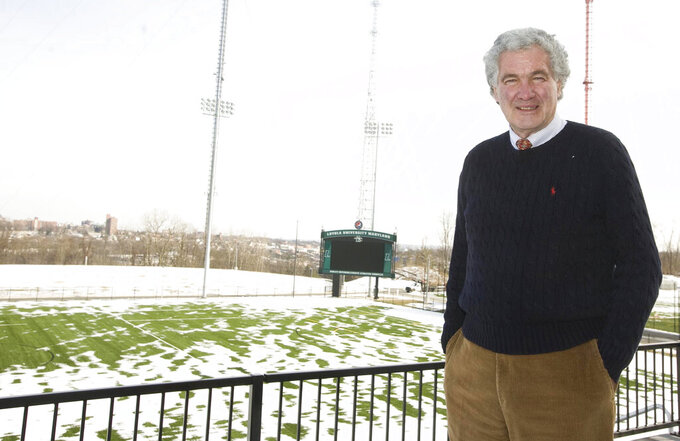 Loyola University athletic director Joe Boylan poses for a portrait at the school's new $62 million Ridley Intercollegiate Athletic Complex, in Baltimore. Boylan, a popular radio voice for Rutgers basketball and a former coach when the team made its only Final Four appearance nearly a half-century ago, died Sunday, March 21, 2021. He was 82. (Sarah Pastrana/The Baltimore Sun via AP) 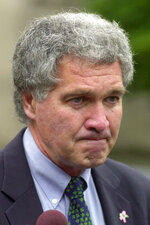 PISCATAWAY, N.J. (AP) — Joe Boylan, a popular radio voice for Rutgers basketball and a former coach when the team made its only Final Four appearance nearly a half-century ago, has died. He was 82.

Rutgers announced his death on Monday. Boylan had a stroke on Wednesday and died Sunday, the day the Scarlet Knights lost to Houston and ended their first NCAA Tournament in 30 years.

“One of the nicest people I’ve ever met," said current coach Steve Pikiell, who called Boylan “our beloved radio guy.”

"He traveled with us for the last five years and was the voice of Rutgers basketball. He will be really missed. He was one of the greatest people that I’ve been around. He was a special person."

Boylan was in the sixth season of his second stint as the men’s color analyst for the Rutgers Sports Network. He previously served as associate head basketball coach of the Scarlet Knights from 1973-85, a span during which they made the Final Four under Tom Young in 1976.

Boylan also was an assistant athletic director as well as the program’s radio analyst from 1985-91.

Prior to returning to Rutgers, the Baltimore native served as athletic director for Loyola of Maryland for 19 years, retiring in 2010.

“Everyone Joe met became his friend. He remembered people and knew their families, and he always went out of his way to say hello to everyone,” Loyola president Rev. Brian F. Linnane said.

“He was a real gentleman, and he would be there for you. He always gave good advice — and, as president, I relied on him for that advice," Linnane said.