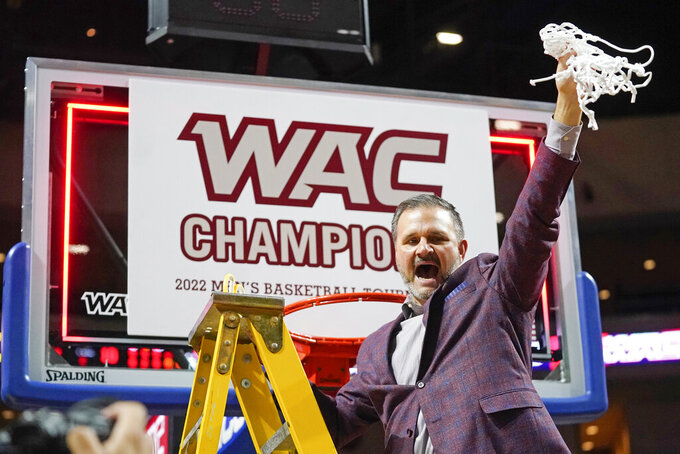 FILE - Then-New Mexico State coach Chris Jans holds up the net following the team's victory over Abilene Christian in an NCAA college basketball game for the championship of Western Athletic Conference men's tournament on March 12, 2022, in Las Vegas. Jans wants Mississippi State to experience March Madness just as he did coaching New Mexico State. Jans replaced Ben Howland and takes over a MSU program seeking to move up from the three NIT appearances it had recently become accustomed to the past five years, including last spring. (AP Photo/Rick Bowmer, File) 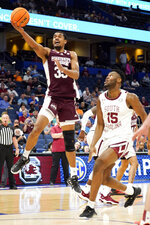 Chris Jans is just seven months removed from coaching in the NCAA Tournament, a memorable experience he wants Mississippi State to feel.

Fulfilling that goal depends on how well the Bulldogs adapt and execute their new coach’s philosophy.

Jans takes over a MSU program seeking to move up from the three NIT appearances it had recently become accustomed to the past five years, including last spring. He believes the Bulldogs (18-16, 8-10 Southeastern Conference) can be competitive but is also mindful that transition is a process.

“In this day and age with the (transfer) portal, and certainly when you get a new job and they make a change in leadership, that’s just how it is,” said Jans, who was hired in March after leading New Mexico State to the second round of March Madness.

“Each and every year, each and every program is going to have to piecemeal it together, at least in that first year. I do like the fact that the majority of our guys are older. ... I think it will be beneficial when the games come around the corner.”

Jans replaced Ben Howland and is one of five coaches in their first year in the SEC. He arrived after going 122-32 in five seasons with the Aggies and guiding them to a first-round NCAA upset of No. 5 seed Connecticut before holding high-scoring (and future SEC opponent) Arkansas below its season averages in a second-round loss.

Jans’ mission in Starkville is infusing that same intensity into the Bulldogs, who haven’t reached the NCAA postseason since 2019. They were picked to finish 10th in the SEC in a preseason media poll.

Jans hinted that he’d like to go 10 or 11 deep on his bench with a wish of playing fast. How that ends up and to what extent rides on his adaptability as well.

“Eventually that’s the way we like to play,” he added, “but if we have to adjust to tailor-make it to our own players this year, we’ll do that.”

Tolu Smith overcame various injuries at the beginning of last season to start 20 of 21 and post career-best scoring and rebounding averages while shooting 58%. The 6-foot-11 senior will be the centerpiece of Jans’ first Bulldogs squad and he looks forward to playing a full season for the first time since starting all 30 games two years ago.

“I feel like I’m in the best shape of my life,” Smith said last month during a Bulldogs podcast. “I’m glad I went through what I went through so I could become what I became. I feel like I did a solid year, but it’s not what I wanted.”

The Bulldogs also have four freshmen including 6-10 KeShawn Murphy, who redshirted last season.

The Bulldogs finished second behind Kentucky at 46% shooting but lost a lot of offense with the departures of Iverson Molinar and Garrison Brooks. They also shot just 30% from behind the arc last season to rank next to last in the SEC.

Junior guard Shakeel Moore made a team-high 44 3s on 31% shooting while Jeffries added 29 on 29% accuracy, which they’ll need to improve in Jans’ up-tempo system.

MSU opens on Nov. 7 against Texas A&M-Corpus Christi, an NCAA Tournament team, before facing Marquette (Nov. 21) in the Fort Myers Tipoff that includes Georgia Tech and Utah. The Bulldogs open SEC play at home against Alabama (Dec. 28) and will take on TCU in the SEC/Big 12 Challenge a month later.