College athletes from overseas might be stuck at home 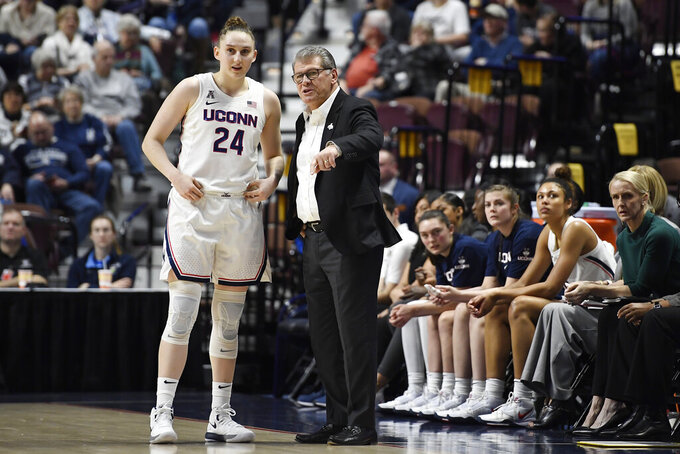 FILE - In this March 7, 2020, file photo, Connecticut head coach Geno Auriemma talks with Connecticut's Anna Makurat (24) in the first half of an NCAA college basketball game in the American Athletic Conference tournament quarterfinals at Mohegan Sun Arena in Uncasville, Conn. Auriemma is asking for help from Congress to get foreign students, including athletes, back to campus. The Huskies have three foreign players on their roster this year: Anna Makurat, a sophomore from Poland; Nika Muhl, a freshman from Croatia, and Aaliyah Edwards, a freshman from Ontario, Canada. (AP Photo/Jessica Hill, File)

STORRS, Conn. (AP) — UConn women’s basketball coach Geno Auriemma has asked for federal help in getting his team back to campus this summer.

The Huskies, who are scheduled to gather in Storrs for summer workouts on July 26, have three foreign players on their roster: Anna Makurat, a sophomore from Poland; Nika Muhl, a freshman from Croatia; and Aaliyah Edwards, a freshman from Ontario, Canada.

They, like thousands of other U.S. college students from foreign countries, are still overseas because of international travel bans instituted as the result of the COVID-19 pandemic, Auriemma said Wednesday.

Muhl can't get a visa because the embassy in Zagreb is closed, Auriemma said. Makurat isn't a U.S. citizen and can't get a flight into the states and Edwards can no longer just drive across the Canadian border, he said.

“These issues are going to be really, really difficult to overcome,” Auriemma said. “We've got some really good people in Washington working on it and hopefully we can work with the NCAA and say, ‘OK, how do we get this done?"’

UConn has about 40 international athletes still overseas, the school said.

Men's basektball coach Dan Hurley said freshman Javonte Brown-Ferguson, who also is from Ontario, has been unable to join the team this summer because in order to get the needed I-20 immigration form, he would have to be enrolled in a class that is being taught, at least partially, in-person. UConn's summer classes are all online because of the pandemic.

The NCAA says there are over 20,000 international student-athletes enrolled to compete at its member schools. It has not said how many are believed to still be overseas and referred questions Wednesday to the individual schools who may be having an issue.

“They can't fly back at the moment," he said. “They are just waiting for an update from their countries or the United States.”

Peter Corasaniti, the director of basketball operations at Syracuse, said the team is playing the same waiting game with men's center Jesse Edwards, who is trying to come back from his home in the Netherlands.

Corasaniti said the problem is much more acute for programs such as field hockey and soccer, where a greater percentage of athletes come from abroad.

“There are teams in our department that have eight or nine kids who are stuck,” he said. “It's the same at every school."

Corasaniti said they are being told that right now college athletes and students in general are considered nonessential and must wait for travel restrictions to be lifted.

Auriemma questions why international students aren't being given the same consideration.

“Not just athletes, but kids who are enrolled here, going to school,” he said. “What is the issue here? Why can't we get that resolved?” So what, (is it) because they don't make $20 million a year and play in the NBA, or Major League Baseball or the NHL, whatever the case may be?”

U.S. Sen. Richard Blumenthal, a Connecticut Democrat, said he and other members of Congress have begun asking the same questions and hope to get the issue resolved before the start of the academic year, which for many schools will begin next month or in September.

“The quickest most expeditious way is to persuade Homeland Security to do the right thing," he said. “But, we'll pursue legislation if necessary.”