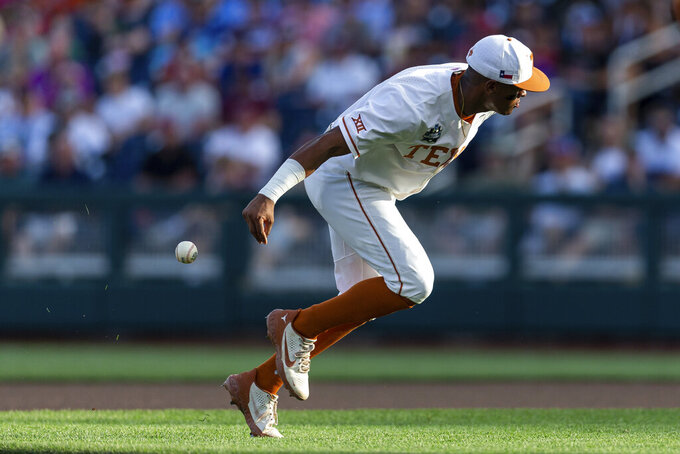 OMAHA, Neb. (AP) — Anthony Holman is the highest-ranking NCAA official at the College World Series and the man in charge of the Division I baseball championship.

Holman is Black, and when he watches the games, he doesn't see many people who look like him on the field or in the dugouts.

“I pay attention to it for sure,” he said, “and it's disappointing. To have eight teams and maybe have a dozen or so folks of color, I think that’s something we should look to increase for sure."

Baseball remains one of the least racially diverse college sports. There were fewer than two dozen Black players — and no Black head coaches or assistant coaches — among the eight teams that made it to the College World Series.

Of the 279 Division I teams not from historically Black colleges and universities, only 4% of players, 1% of the head coaches and 1% of assistant coaches were Black in 2021, according to the most recent NCAA research. While coaching staffs have remained mostly white with rare exception, the number of Black players at non-HBCU Division I schools went from 236 in 2012 to 434 in 2021.

“We have seen an uptick, and it’s much needed,” said Holman, NCAA managing director of championships and alliances.

There will be four Black head coaches at non-HBCU schools in 2023, up from two this season.

Elton Pollock has been at Presbyterian for 18 years and Edwin Thompson for two years at Georgetown after five seasons at Eastern Kentucky. Kerrick Jackson was hired at Memphis last month, and Blake Beemer was announced as Butler's new coach Tuesday.

Holman said he sees the hiring of Black head coaches as an important step when it comes to bringing more Black players into the game.

“If you don’t identify with a coach or other players, if you can’t see it, it’s tough to believe it,” Holman said. “We don’t want to lose a generation of players because there’s no path or no role model or no images for them to see.”

Jackson, the Memphis coach and chairman of the American Baseball Coaches Association's Diversity in Baseball Committee, said his priorities are to generate funding for more programs aimed at introducing the sport to Black children, especially between the ages of 6 and 10, and developing a Black coaching pipeline at the high school and college levels.

There were only nine Black assistant coaches at non-HBCU Division I schools last year, so it will take time to get that pipeline flowing. Jackson said he wants to develop a network designed to identify Black players coming out of college or pro ball who show potential as coaches.

“We're moving in the right direction when you look at what’s happened here in the last three weeks — me getting this opportunity here at the University of Memphis and then Blake Beemer getting the opportunity at Butler,” Jackson said. “I think it’s incumbent upon us to continue to make sure we provide opportunities to young coaches and players, and you have to start somewhere.”

The NCAA has partnered with Major League Baseball on initiatives to increase involvement of minorities as coaches, players and umpires, Holman said. MLB, the players' union and others in 2020 pledged $10 million for programs intended to improve representation of Black players in all levels of baseball.

The NCAA also is working with MLB and the Jackie Robinson Foundation to start scholarship programs for Black players who might otherwise pursue football and basketball.

Football and basketball players receive full athletic scholarships. Baseball scholarships are capped at 11.7 per team, meaning most players receive partial aid, though the sport could see a dramatic increase in scholarships this fall once the NCAA's Transformation Committee announces changes for modernizing NCAA governance.

“We can’t make the assumption that all Black folks are poor and that if baseball were more lucrative they would in turn decide to go with baseball because now it's a full ride," Jackson said.

“Now we’re making the assumption all the guys playing football and basketball are from low economic situations so they had to choose that,” he added. “Now we’re widening that gap and promoting those stereotypes that white kids play because they can afford to pay the difference in the college scholarship, and that’s not necessarily the case.”

Jackson said he was heartened at his introductory news conference at Memphis when a Black 12-year-old in attendance told him he wanted to be on hand to see a Black man get the head coaching job at the local university.

“He stood up during the press conference and asked, ‘When are you going to have camps because I want to come play for you,’” Jackson said. "It was this whole thing of, ‘Oh, wow, there’s someone who looks like me who is actually in charge. How do I become a part of that?’ We need to create more of those types of environments where we have more of these kids play.”