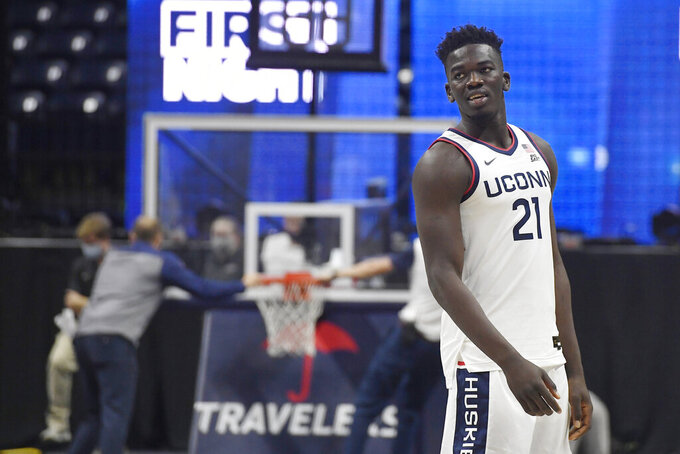 STORRS, Conn. (AP) — Dan Hurley needed three seasons as UConn's coach to get the Huskies back into the NCAA Tournament after a five-year absence.

In his fourth year, his team expects to take a bigger step — contending for a Big East title and possibly the program's fifth national championship — even if those expectations might raise some eyebrows outside of Storrs.

The Huskies come into the season ranked No. 24, their first preseason ranking since 2016.

“You don't come here, or do the basketball thing the way I've always done it with my family unless you love pressure and you love expectations and want to be thought of as a program that is a championship contender year in and year out," Hurley said. “That's what you come here to build. And with recruiting, what we had here last year and development, we feel like we're getting closer."

The Huskies, who finished 15-8 during the pandemic-marred 2020-21 season, won't have last year's star, James Bouknight, who averaged almost 19 points, to help them take that next step. He a left after his sophomore season to become the No. 11 pick in the NBA draft for Charlotte.

But UConn returns nine players who have seen the court, including their next six top scorers.

They've also added to a highly-touted recruiting class that includes sharp-shooting guard Jordan Hawkins, playmaking guard Rasool Diggins and 6-foot-10 Samson Johnson, a post player who can also hit a 3-point shot. All three are expected to compete for minutes.

“To have that pressure to play good is a privilege,” said Polley, who is coming back for his fifth season at Connecticut. “In previous years we didn’t have that pressure to be Top 25 in the country or top of the Big East. But, we’re expected to be that this year, so we should just take it as a privilege, be grateful for the opportunity and be grateful that we are looked at as a great team.”

Hurley said the offense will run this year through sophomore Adama Sanogo. The 6-9 post from Mali came in as a freshman and ended up dominating the paint, starting the final 19 games of the season. He averaged 7.3 points, 4.8 rebounds, led team by shooting better than 55% from the field and blocked 21 shots.

Hurley said he's only gotten better in the offseason.

“He’s our best player," he said. “When you see what the guy does daily, he’s a special player, a burgeoning great player. That’s a man on a mission.”

The Huskies have a group of interchangeable wings and forwards, including five players who are 6-9 in Sanogo, Polley, Isaiah Whaley, Akok Akok, and Richie Springs. They also have the 6-10 Samson and 6-6 Tyrese Martin.

Almost all can hit an outside shot or play in the paint. And they'll do a lot of switching with each other on defense, Whaley said.

Hurley is expecting a lot of point guard R.J. Cole, who is coming back for a graduate year after averaging 12.2 points and 4.3 assists last season.

Cole, a transfer from Howard, and guard Tyrese Martin were named to the preseason all-conference second team. Andre Jackson, last year's big-name recruit, is coming off and injury-plagued freshman season, but is healthy headed into this season.

With Hawkins and Diggins also competing for minutes, Hurley will have plenty of options.

“This is like a far cry when you first get here and you feel handcuffed and you’re just trying to figure out a way to put five guys out there,” Hurley said. “Now a good player that’s not doing the things that we need him to do for us to win isn’t going to play.”

The Huskies dropped their final two games last season after playing a poor final 5:07 in the Big East Tournament against Creighton and a sloppy 40 minutes in the NCAA Tournament against Maryland. So 45:07 has become the team’s mantra this season, with Hurley saying he may make it into a T-shirt.

Hurley hired Luke Murray in the offseason as an assistant coach to replace Kevin Freeman, who has been placed in an administrative role.

Murray, the son of comedian Bill Murray, was an assistant the last three seasons at Louisville and has been a coach for 13 years, including two stints under Hurley at Wagner and Rhode Island.

UConn opens the season on Nov. 9 in Storrs against Central Connecticut.