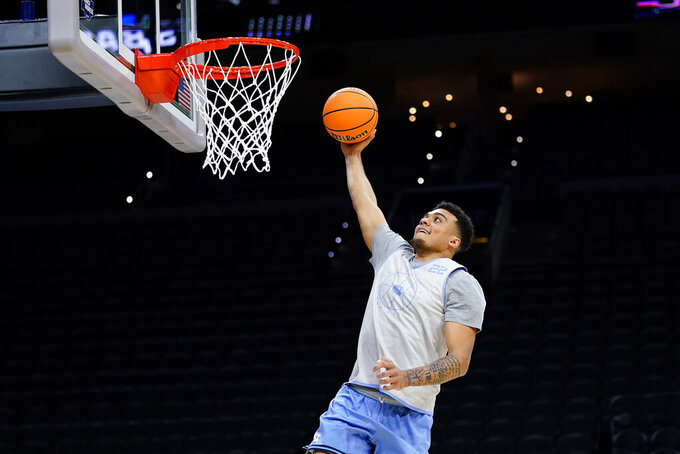 NEW ORLEANS (AP) — The four blueblood programs that have descended upon the Superdome for the Final Four all have the ability to recruit on a national scale, their coaches able to hop aboard a jet on a moment's notice to sit in a living room or take in a game.

Turns out some of their best players were in their own backyard.

All-American guard Ochai Agbaji grew up in Kansas City, Missouri, before heading about 20 minutes west on Interstate 70 to become a star for Kansas, which faces Villanova in the first national semifinal Saturday night. His running mate, Christian Braun, grew up in southeast Kansas but also played his high school ball in suburban Kansas City.

Two-time Big East player of the year Collin Gillespie, who has Wildcats coach Jay Wright eyeing a third national title, also played his high school ball about 20 minutes from campus at Archbishop Wood in suburban Philadelphia. Eric Dixon grew up in nearby Willow Grove and Chris Arcidiacono in Langhorne, Pennsylvania.

“We’ve never put an emphasis on recruiting local kids. We’ve put emphasis just going out and getting the best kids,” Kansas coach Bill Self said, “and we’ve been able to recruit national for the most part.

“But it’s pretty special that within 45 minutes of your home you have arguably two of the very best wings in college basketball.”

There are hometown connections in the second semifinal between Duke and North Carolina, too, and those might produce a little extra motivation given that their rival campuses famously lie just 10 miles apart.

Justin McKoy, who played the entire overtime in the Tar Heels' upset of No. 1 seed Baylor, grew up 30 minutes away in Raleigh. Duke captain Joey Baker only moved about 90 minutes north of his home in Fayetteville, North Carolina.

Three years ago, Caleb Samuels had made the decision to transfer from Tulane and was taking a visit to Villanova, where Gillespie and another hometown player, Dhamir Cosby-Roundtree, were given the job of showing him around.

Some of the coaches asked if they would have a little shooting competition and, well, one thing led to another.

“We're two competitive guys. It turned into one-on-one,” Gillespie recalled Thursday, “and he got up on me like, 13-0, and I was scared. I was nervous. I was like, who is this kid? Because I hadn't heard of him before. And I obviously looked him up and watched his highlights — ‘All right, he can help us.’”

That might've been an understatement. Gillespie and Samuels are now two of the Wildcats' top three scorers.

“I was up 13-0 the first game, and I remember him coming back, making every shot after that, after I missed, obviously, a layup or something," Samuels said. “He ended up winning that game. The series ended up being 3-1, Collin.”

The Final Four has become a Teahan family tradition.

First it was Connor. He played at Kansas from 2007-11 and went to the Final Four twice, winning a national championship with the Jayhawks in 2008.

Now it's Chris' turn. He was a freshman on the 2018 Final Four team and is back this year as a super senior.

“The Teahans have kind of become the first family of our program,” Kansas coach Bill Self said. “They both put their handprint all over everything we do.”

CENTER OF THE UNIVERSE

It's not uncommon to see politicians making public bets on major sporting events with products highlighting their state's industries. That's not an option for North Carolina Gov. Roy Cooper considering home-state teams UNC and Duke have brought their rivalry to New Orleans.

So Cooper on Thursday instead issued a proclamation that the state is “The Center of the College Basketball Universe.”

“The stakes are high on Saturday and fans across the nation will get a firsthand look at two programs that have for decades competed fiercely and divided the loyalty of family and friends, but made our state proud," Cooper said.