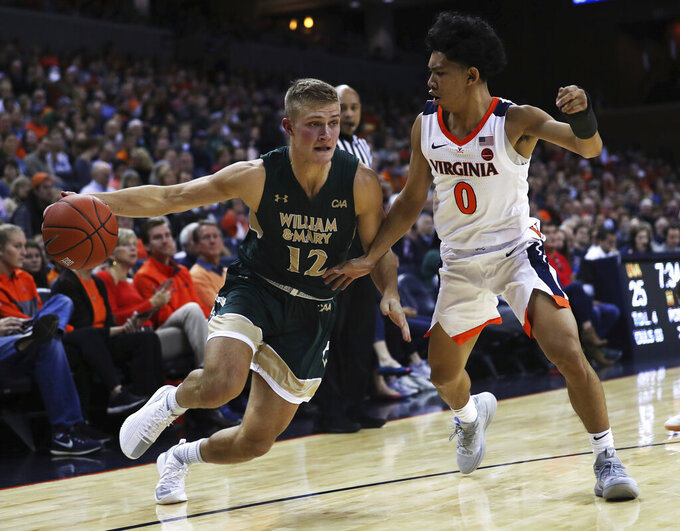 File-This Dec. 22, 2018, file photo shows William & Mary's guard Luke Loewe (12) driving around Virginia guard Kihei Clark (0) in the first half of an NCAA college basketball game, in Charlottesville, Va. Minnesota has made Loewe the latest piece of a major offseason roster revamp, picking up the graduate transfer from William & Mary. The Gophers announced the addition of Loewe on Monday, May 3, 2021. The 6-foot-4, 186-pound Loewe was a two-time All-Defensive Team pick in the Colonial Athletic Association and a second-team All-CAA selection in 2020-21. (AP Photo/Zack Wajsgras, File)

The Gophers announced the addition of Loewe on Monday. The 6-foot-4, 186-pound Loewe was a two-time All-Defensive Team pick in the Colonial Athletic Association and a second-team All-CAA selection in 2020-21.

Loewe, a native of Fond du Lac, Wisconsin, started 80 of 107 career games for the Tribe. He was sixth in the CAA in scoring last season with an average of 16.2 points per game and led the conference in assist-to-turnover ratio. He also led the CAA as a junior in 2019-20 in 3-point shooting at 43.9%, before his rate dropped to 29.8% last season.

Only two players from the 13-man roster the Gophers finished last season with are expected to return under new coach Ben Johnson. Three of the departing players were seniors. The other eight have entered the transfer portal, including starters Marcus Carr, Liam Robbins and Gabe Kalscheur. Carr is also an early entry candidate for the NBA draft.