Illini's Cockburn to sit 3 games for selling items too early 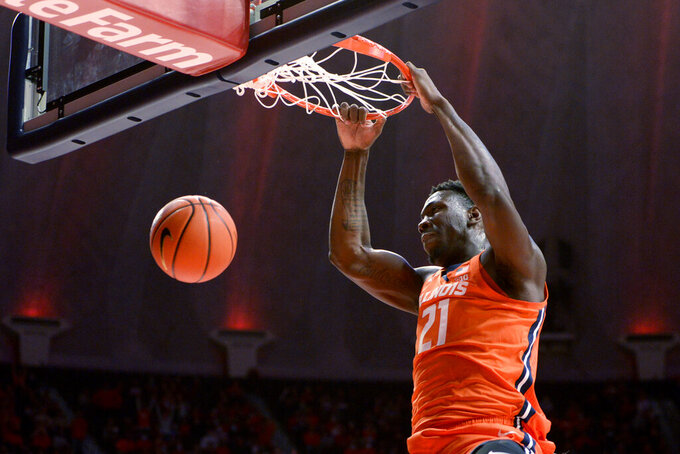 Illinois' Kofi Cockburn dunks during the first half of the team's NCAA exhibition college basketball game against Indiana of Pennsylvania on Friday, Oct. 29, 2021, in Champaign, Ill. (AP Photo/Michael Allio)

CHAMPAIGN, Ill. (AP) — The NCAA has suspended Illinois center Kofi Cockburn for the first three games of the season because he sold apparel and memorabilia before new regulations that allow athletes to participate in money-making ventures went into effect.

The Associated Press preseason All-American is set to play his first game Nov. 22 against Cincinnati in Kansas City, Missouri, according to the school's announcement Monday.

The 7-foot center will miss the 11th-ranked Illini's first two home games, Nov. 9 against Jackson State and Nov. 12 against Arkansas State, as well as a Nov. 15 game against Marquette in the Gavitt Tipoff Games. He is permitted to practice with the team during the suspension.

The suspension is required as part of the reinstatement process that was triggered because Cockburn sold institutionally issued apparel and memorabilia in June, the university said. The state of Illinois and the NCAA enacted new name, image and likeness legislation on July 1 that would have made these sales permissible.

In addition to the missed games, Cockburn will repay the amount generated from selling apparel by making a donation to a charity of his choice. It wasn't immediately clear how much that would be.

“We are disappointed with the three-game suspension, because there were unprecedented factors and altered timelines related to his decision to ultimately withdraw from the NBA draft and return to school,” Illinois coach Brad Underwood said in a statement Monday. “Once Kofi had a full understanding of where he stood regarding the draft, he made an educated decision to return to school, work toward his degree, and continue improving his game.

“That said, we understand and respect the NCAA’s decision in this matter, and we will move forward accordingly. As always, Kofi’s attitude and outlook remain upbeat and positive. He is focused on helping his teammates prepare for the season, and we can’t wait to have him rejoin us on the court.”

Cockburn averaged 17.7 points and 9.5 rebounds per game last season to earn a second-team spot on the AP All-America team. He was projected to be taken in the late first round or early second round of the NBA draft, but decided to return to school.