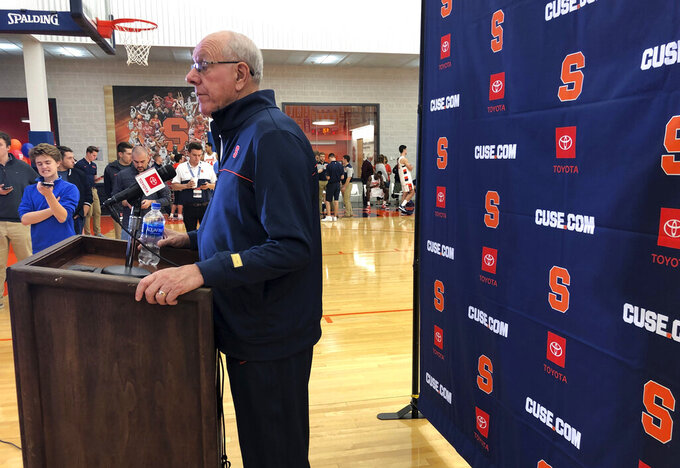 Syracuse coach Jim Boeheim speaks Friday, Oct, 11, 2019, at the team’s annual media day in Syracuse, N.Y. The team is ahead of schedule after a summer trip to Italy. They are to open the season Nov. 6, 2019, at home against reigning national champion Virginia. (AP Photo/John Kekis)

SYRACUSE, N.Y. (AP) — Jim Boeheim is set for his 44th season at Syracuse, and this time around the Orange got a jump start with a summer trip to Italy.

With five freshmen on board and lots of scoring to replace, that's a plus.

"Everybody on the trip contributed and looked comfortable in what we were trying to do. We're a little further ahead," Boeheim said Friday at the team's annual media day. "From that point of view, it was very helpful. But basically you still go back and do the same things that you would do every year. We're a little further ahead. There's personnel coming back, but there's so many new guys you do a lot of teaching stuff that is new to them."

Among those returning are forwards Elijah Hughes, Marek Dolezaj, Robert Braswell, and Bourama Sidibe, and guards Howard Washington, Buddy Boeheim — the coach's youngest son — and Jalen Carey. Gone is a trio — Tyus Battle, Oshae Brissett and Frank Howard — that played big minutes and accounted for 55 percent of the scoring on a team that averaged 69.7 points a game last season, as well as towering center Paschal Chukwu, who had 57 blocks.

"The difference with this year's team and last year's with Tyus, Frank, and Oshae you basically had three guys that were going to play 38 minutes," Boeheim said. "And this year the only guy at this stage that looks like he would be playing that many minutes would be Elijah. I think there's more flexibility in terms of the minutes."

Hughes was second on the team in scoring last season at 13.7 points per game and led with 87 3-pointers, and he'll be looked at to be one of the leaders.

"We're pretty flexible where guys are going to play," Boeheim said. "We have five guards and four can play the point. We'll see how it goes. It's a work in progress. We're trying to figure out who's going to play. There's nothing set in stone. We'll be flexible with how we play guys. It could change, literally, from game to game. We'll see how people play."

Last year the Orange had the nation's tallest team — topped by the 7-foot-2 Chukwu — but Boeheim's defensive scheme faltered in the postseason, allowing Baylor to hit 16 3-pointers in a 78-68 first-round victory over Syracuse in the NCAA Tournament.

Syracuse, which went 20-14 last season, was picked to finish eighth in the Atlantic Coast Conference in 2019-20, behind Notre Dame and just ahead of Miami. Duke, North Carolina, Louisville, reigning national champion Virginia and Florida State were the top five. No Syracuse player was picked for the All-ACC team.

This season marks the ACC's first 20-game conference slate, including seven league games to begin the regular season. Doubleheaders are scheduled for Nov. 5-6 on the ACC Network, with Virginia visiting Syracuse on Nov. 6 in the Orange's season opener after a pair of late-October exhibitions.

"Obviously, it's a tough conference," Boeheim said. "It's the same for everybody. You're starting new. It's new challenges every year. I look forward to it."

For Girard, also a star quarterback in high school, it was a surreal moment as he contemplated playing in the Orange's scrimmage Friday night in the Carrier Dome as a member of the basketball team he rooted for as a kid back home in Glens Falls.

"It's crazy," Girard said. "I played football games in the dome before. To think that I'm going to be here playing basketball repping Syracuse this year is really different. You've kind of got to pinch yourself — is this really happening?"