Kalkbrenner takes over, Bluejays hold off No. 18 UConn 64-62 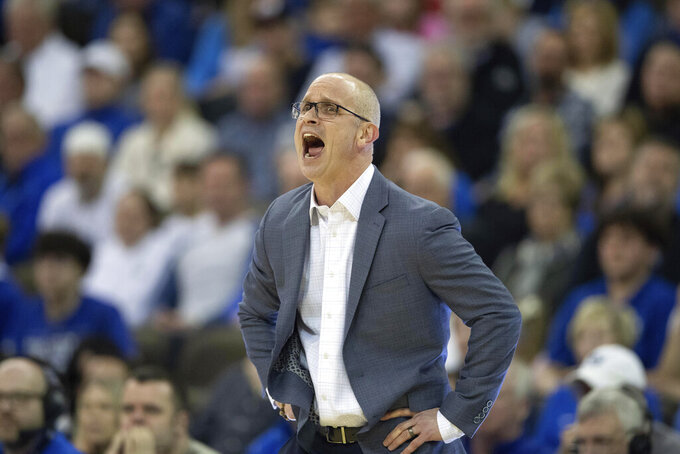 Connecticut coach Dan Hurley yells from the sideline during the first half of the team's NCAA college basketball game against Creighton on Wednesday, March 2, 2022, in Omaha, Neb. (AP Photo/Rebecca S. Gratz) 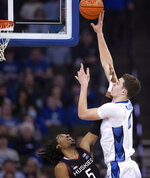 OMAHA, Neb. (AP) — The days of Ryan Kalkbrenner huffing and puffing his way up and down the court are long gone.

Creighton's 7-foot sophomore showed boundless energy and emotion Wednesday night when his team needed him most, pumping his fist and letting out primal screams dunk after dunk as he willed the Bluejays to a 64-62 win over No. 18 Connecticut.

Kalkbrenner matched his career high with 22 points, scoring 20 in the second half as the Huskies tried to come all the way back from 16 down.

“UConn, they played hard. That’s their thing,” Kalkbrenner said. “For us to match their energy was going to be big for us, and you could feel the energy coming from the crowd, and it made it so easy to play hard for the next play.”

The Bluejays (20-9, 12-6 Big East) won for the seventh time in eight games and clinched a top-five seed and first-round bye in the conference tournament next week.

“Digging a hole on the road like that at the start of the game, they took it right to us,” Huskies coach Dan Hurley said. “We blew an unbelievable opportunity to get six straight Big East wins here with a chance to get our seventh at home and really go into New York City on a roll.”

Kalkbrenner shot 9 of 12 in the second half, including five dunks, and played all 20 minutes. He played all but five over the course of the game.

“Ryan’s really worked hard on his conditioning,” Creighton coach Greg McDermott said. “Anyone that watched him play last year ... two times up the floor, he was tired. He really worked to get himself in shape for the (Team) USA tryouts, and he piggybacked that into the rest of this season.”

The Huskies outscored the Bluejays 12-3 to open the second half and tied it 48-all when Jalen Gaffney stole Ryan Hawkins’ inbounds pass and went in for a layup with 9:16 to play.

That's when Kalkbrenner took over. He scored six straight baskets — four of them dunks — and Creighton never let the Huskies go ahead.

Tyler Polley's 3-pointer pulled the Huskies to 60-58 with 20 seconds left, and after O'Connell missed two free throws, R.J. Cole drove for a layup to make it 62-60 with seven seconds remaining.

Hawkins got fouled on the inbounds pass and made both free throws with 6.1 seconds left to put the game away.

“We’ve had a lot of things not go our way this season,” Hawkins said, “so for us to bounce back every single time and be resilient enough to not roll over and die, that’s been really big for us. We get a ranked opponent coming into our gym, and we’re fighting for our season, so it’s really cool to see everyone come together and be tough and gritty and find a way to win the game.”

Arthur Kaluma had all 15 of his points in the first half for Creighton and Hawkins added 13. Kalkbrenner pulled down 10 rebounds for his fifth double-double.

Cole led the Huskies with 20 points. Adama Sanogo had 13 points and 16 rebounds, and Tyrese Martin scored 11.

UConn: The Huskies' 33.3% shooting was their worst in a first half since they made just 28.6% in the 59-55 loss to Creighton on Feb. 1. They improved to 48% in the second half, but it wasn't good enough to come all the way back from a big deficit.

Creighton: The team played its second game without injured point guard Ryan Nembhard and knocked off a Top 25 opponent for the fourth time this season. After winning both meetings with UConn, the Bluejays own the tiebreaker over the Huskies for third place in the Big East heading into their regular-season finales.

Creighton entered firmly on the NCAA Tournament bubble. McDermott said he thought the Bluejays would be in win or lose the rest of the way.

“How many bubble teams, or whatever they call us, have won at UConn and won at Marquette and won at St. John's and beaten Villanova by 20? Nobody has that on their resume. So I thought we were already there.”

UConn's Jordan Hawkins walked off the court limping with about five minutes left in the first half and didn't return. Hurley didn't have an update on his status. Hawkins, who averages 15 minutes and six points per game, left Sunday's game at Georgetown with symptoms of a concussion but was able to practice Tuesday.