Kansas measure would allow college athletes to cash in 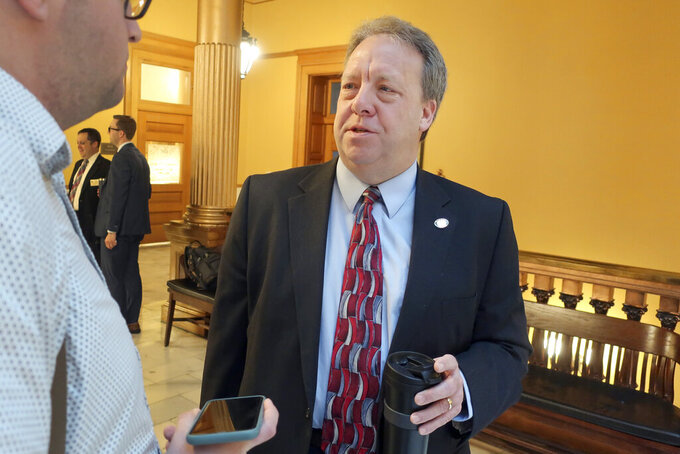 TOPEKA, Kan. (AP) — Kansas legislators are taking steps to allow college athletes to hire agents and sign endorsement deals because they fear that if they don't, out-of-state rivals will attract the best recruits and leave Kansas' athletic programs in the dust.

A bill that would bar state universities from preventing their athletes from earning outside compensation easily cleared the state Senate Commerce Committee on Tuesday. It also would allow private, non-profit colleges to permit their athletes to hire agents and do endorsements. It goes next to the full Senate for debate.

Athletics officials at the University of Kansas and Kansas State University back the measure and it appears to have bipartisan support, as Kansas' top-ranked men's basketball team looks ahead to March Madness.

Kansas is one of many states that are considering such measures since California last year became the first state to enact such a law, though its policy doesn't take effect until 2023. The Kansas measure would take effect when 15 other states have passed similar laws, and supporters said it's designed in part to pressure the NCAA into acting on the issue.

“We need to make sure that we are, as a state giving, a signal to the NCAA, ‘you need to be addressing this, or you’re going to have a quilt of legislation in all the different states,'" said state Sen. Molly Baumgardner, a Kansas City-area Republican. “They've been very slow and methodical.”

The NCAA's Board of Governors voted in October to permit athletes to “benefit from the use of their name, image and likeness" and directed its three divisions to put rules in place by January. Florida lawmakers are pursuing a measure to allow the same in 2021.

In Kansas, Democratic state Sen. Tom Holland, whose district includes part of Lawrence, which is home to the main University of Kansas campus, said he expects the measure to “fly through” his chamber. The bill also appears to have bipartisan support in the Kansas House.

“These kids can be playing in a game and blow out their knee and ruin a whole lucrative career, and the colleges are making boatloads of money out of them,” said state Rep. Tim Hodge, a Wichita-area Democrat.

A key concern for Kansas legislators is how much sports programs — like the storied Kansas men's basketball team or Kansas State's competitive football program — might suffer if athletes at colleges in other states can be compensated but those at Kansas schools cannot.

And state Rep. Jan Kessinger, a Kansas City-area Republican, said the competitive disadvantage might have broader consequences. He said he chose to attend the University of Kansas because its football team played in the Orange Bowl in 1969.

“College athletics is the front door of the university,” Kessinger said. “Logical or not, many students pick their colleges of choice because of athletics.”

But not all Kansas lawmakers are fans of the bill. State Sen. Mike Thompson, a Kansas City-area Republican, voted against it in committee and said later that it's more appropriate for Congress to tackle what is a national issue. He also questioned whether it's fair to have taxpayers funding athletic scholarships — which wouldn't be considered compensation under the bill — if athletes can make money from endorsements.

“Why should an 84-year-old lady who's living on a fixed income have to pay so that the KU team gets a star athlete?” he said.