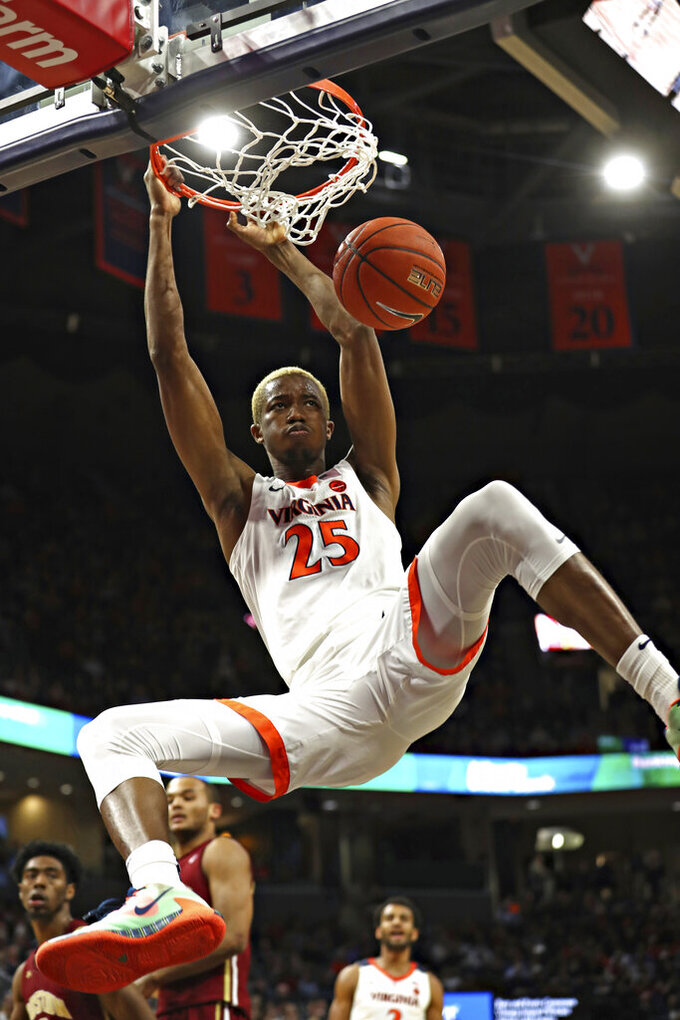 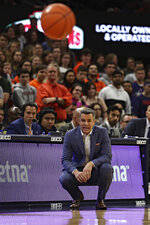 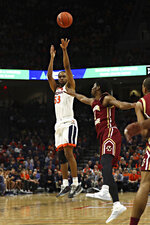 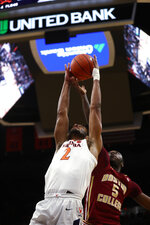 CHARLOTTESVILLE, Va. (AP) — Virginia appears to finally have found some answers to its season-long search for offensive weapons, and it couldn't have come at a better time.

Braxton Key and Kihei Clark scored 17 points each, Tomas Woldetensae and Jayy Huff added 14 apiece and Mamadi Diakite had 10 Wednesday night as Virginia gradually pulled away for its third consecutive victory, 78-65 against Boston College. The Cavaliers' point total was their highest of the season.

“This was great,” coach Tony Bennett said. “Our offense kind of carried us.”

The Cavaliers already led 45-39 when two free throws by Key sparked a 25-11 run. Key had 11 points in the spurt that gave Virginia (18-7, 10-5 Atlantic Coast Conference) a 70-50 lead with 5:21 to play. The victory solidified the Cavaliers' grasp on fourth place in the ACC with three weeks left in the regular season.

It also was their fifth win in six games, a streak that began amid talk that the reigning national champions might not even make the NCAA Tournament.

“We feel like we can win out the regular season. That's one of our goals," Key said.

BC coach Jim Christian might be inclined to agree.

Clark was a big part of the efficiency, finishing with eight assists. Bennett said increased attention to limiting turnovers has also been one of the keys.

“Getting some contributions from others, it balances it out so I think they can't just stack the deck against him,” Bennett said of his point guard, who was turnover-prone earlier in the season when scoring was harder to come by.

Added Christian: “Clark can really deliver the ball at the right time."

Huff and Woldetensae each made three 3-pointers in the first half, with Huff's last one coming in the final seconds to give Virginia a 35-23 halftime lead.

“When Huff's hitting threes, that's a different weapon for them,” Christian said.

BC closed to within six before Key sparked the long run to seal the outcome.

The Eagles played without scoring leader Derryck Thornton (13.1 ppg), who experienced back spasms in warmups. He missed both games against Virginia.

Boston College: Popovic was having a nice night — 10 points, five rebounds — until he was whistled for three fouls in the first 4:48 of the second half and went to the bench. With Virginia's lead growing, BC coach Jim Christian gambled and put the 6-foot-11 senior back in. He kept scoring, but so did the Cavaliers.

Virginia: After a poor start to the season, Woldentensae has emerged as the offensive wild card the Cavaliers have been seeking. In three of his previous six games, he'd made six or more 3-pointers. He's now 28 for 60 (46.7%) in his last seven games after making four of eight against the Eagles.

“It's a pretty easy assist if you throw it to him,” Huff said.

“Extra shots after practice,” he said. “Those extra shots actually give you the confidence to come into games and be ready. I mean `mind ready.'"

The Eagles return home to face Clemson on Saturday night.

The Cavaliers go on the road and play a noon game at Pittsburgh on Saturday.