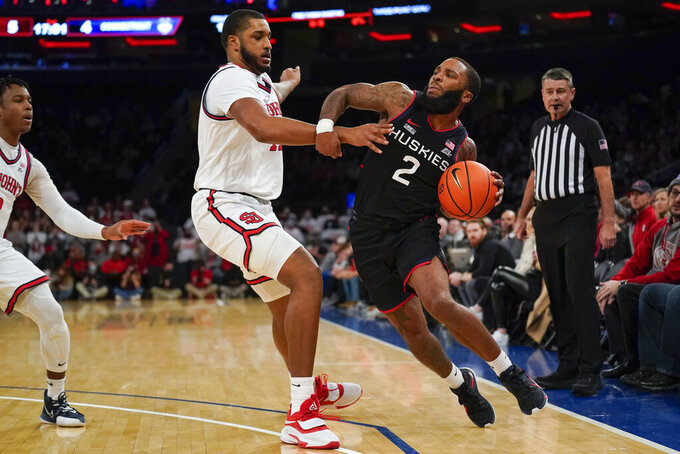 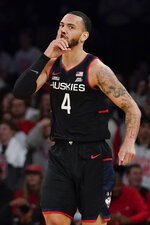 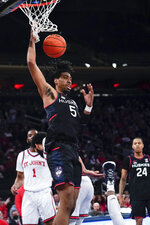 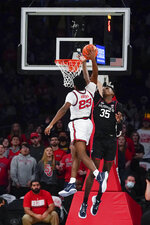 NEW YORK (AP) — After a grueling stretch of games, UConn is headed home with a feel-good win.

Tyrese Martin scored all 17 of his points in the second half and the 24th-ranked Huskies rallied past St. John's 63-60 on Sunday at Madison Square Garden.

R.J. Cole had 14 points and 6-foot-6 sophomore Andre Jackson grabbed a career-high 16 rebounds to help the weary Huskies (17-7, 8-5 Big East) overcome 36% shooting. They swept the season series from old rival St. John's and broke a tie with Creighton for third place in the conference.

“It was a wild game at times,” coach Dan Hurley said. “I was proud of the guys for finding a way to win with our defense."

Isaiah Whaley added 11 points on 5-of-6 shooting and was a consistent force at the defensive end. He pulled down seven rebounds, made three steals and finished with five of UConn's 13 blocked shots.

It was the second road game in 41 hours for Connecticut, capping a rugged stretch of three games in six days and four in nine — three away from home.

“I think it showed at times. We were a step slow,” Hurley said. “Two out of three in the Big East — you’ll take it. It was a great week.”

Montez Mathis had 14 points off the bench to spark the Red Storm (13-11, 5-8), who played without Posh Alexander for the second consecutive game. The star point guard, last season's Big East freshman of the year, is sidelined with a sprained right ankle.

Dylan Addae-Wusu scored all 12 of his points in the first half, and finished with seven rebounds and five assists.

“The amount of layups we miss a game, it's unacceptable,” Champagnie said. “That plays a big part into it.”

Cheers and chants for both schools echoed around The Garden from the Super Bowl Sunday crowd of 6,567 on a snowy day in the Big Apple. It was the first Big East regular-season game in New York City since 2013 for the Huskies, who rejoined the league last season. They hadn't beaten St. John's at MSG since January 2009.

Martin, who also had eight rebounds, made consecutive 3-pointers early in the second half and put his index finger over his lips to shush the St. John's side when he sank another soon after.

Left out of the starting lineup for the first time all season, Mathis scored six points in an 11-0 run for the Red Storm that was capped by Stef Smith's 3-pointer with 7:46 remaining. That gave St. John's a 55-48 lead — the largest for either team.

But the Huskies responded immediately with an 11-0 surge of their own. Whaley was fouled on a putback and converted the three-point play to put UConn back in front with 3:46 left. Adama Sanogo banked in a shot off a nice pass from Cole to extend UConn's lead to 59-55 with 2:19 to go.

A drive by Mathis with 2:10 left ended the Red Storm's scoring drought at 5:36, but he missed a free throw that could have made it a three-point play.

Wheeler drained a 3 with 14.3 seconds remaining to cut the margin to one before Cole sank two free throws to make it 63-60.

Guarded closely on the right wing, Wheeler missed a 3 just before the final horn that would have tied it.

UConn: The Huskies are still looking to hit their stride and really get on a roll. They had lost three of four since a five-game winning streak that started with an 86-78 overtime victory Jan. 12 at home against St. John’s. But they have the talent to be dangerous in March — they beat Auburn in double overtime on a neutral floor in November before the Tigers ascended to No. 1 in the nation.

St. John's: Dropped to 0-6 against Top 25 teams in a frustrating season that was expected to yield more success. St. John's, sitting eighth in the Big East, went 1-4 in five regular-season games at Madison Square Garden, with the only win coming against last-place Georgetown.

“It was one of those games where we just came up short again,” Anderson said.

UConn forward Akok Akok missed his fourth straight game with a tendon injury in his foot. He is day-to-day, the team said. ... Mathis, who shot 1 for 14 in Tuesday’s loss to No. 15 Villanova, was replaced in the starting lineup by Smith.