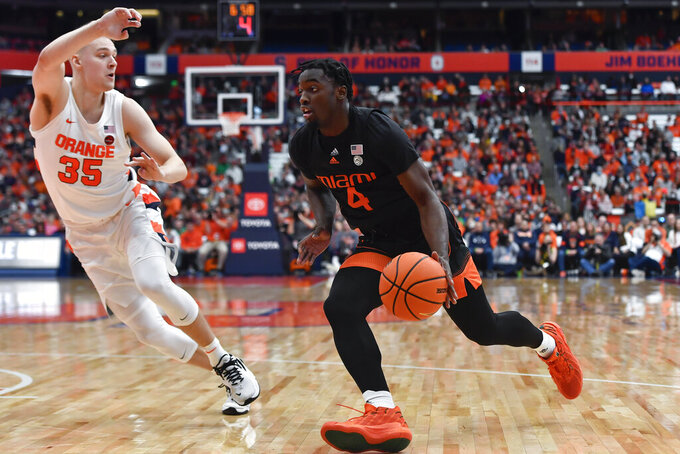 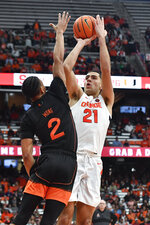 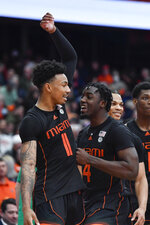 SYRACUSE, N.Y. (AP) — Jordan Miller scored six of his 25 points in the final 25 seconds and finished with season-high 13 rebounds, Kameron McGusty had 15 of his 19 points after halftime and Miami scored the final 10 points in a 75-72 win over Syracuse on Saturday in the regular season finale for both teams.

The Orange head into the ACC Tournament needing a run to prevent completing the first losing season in Jim Boeheim’s 46 years as head coach. It’s the first time the program has suffered 16 losses in a season since 1968-69, Roy Danforth’s first year as head coach.

“We played as well as we can play,” Jim Boeheim said. “We can't handle their pressure.”

Buddy Boeheim scored in the paint to make it a 10-point game with 2:29 left but McGusty answered with a bucket 11 seconds later and Moore added a 3-pointer before Boeheim made two free throws to make to 72-65 with 1:10 to go.

McGusty made a layup and then Moore stole a pass and hit McGusty for another layup to pull Miami within three with 46 seconds remaining. Girard lost the ball before Miller made a tip-in off a missed 3-point shot by Moore to make it 72-71 before another steal by Moore, who was fouled. He missed the front end of the 1-and-1 but Miller tipped the ball to himself and and then banked in the go-ahead basket — which gave the Hurricanes their first lead since 5-3 — as he fell to the ground with 12.8 seconds left.

After Miami jumped to a 5-0 lead, Buddy Boeheim made a 3 and a layup before he and Cole Swider hit back-to-back 3-pointers in an 11-0 run and Boeheim scored the Orange's first 10 points in a 13-3 spurt that gave Syracuse a 37-23 lead late in the first half. Bourama Sidibe sandwiched a pair of layups around a 3-pointer by Buddy Boeheim in a 7-0 run to open the second and give the Orangemen their biggest lead at 44-26.

Syracuse earned the No. 9 seed and will play eighth-seeded Florida State in the ACC Tournament on Wednesday.