For NCAA, year of upheaval leads to need for transformation 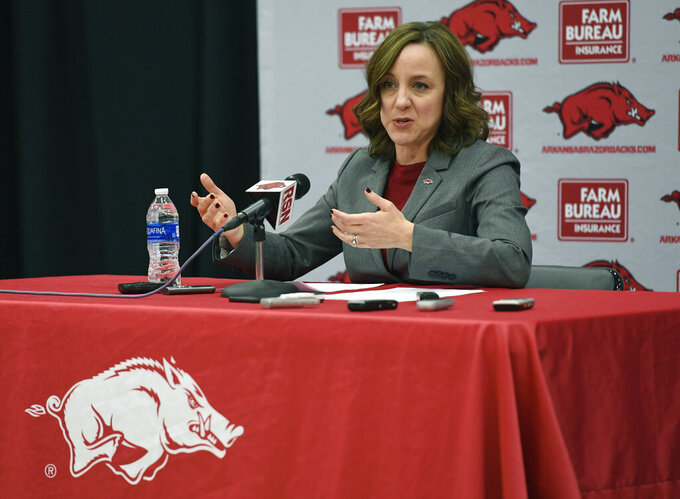 FILE -Julie Cromer Peoples, interim athletic director for the University of Arkansas, talks about the decision to fire Arkansas coach Bret Bielema following a Razorbacks NCAA college football game against Missouri, Friday, Nov. 24, 2017, in Fayetteville, Ark. From court losses to political pressure to questions about how — and if — athletes should be compensated, the NCAA and college sports have faced all sorts of potential existential threats for more than 100 years. Greg Sankey has been appointed co-chairperson of the NCAA's Division I Transformation Committee, along with Ohio University athletic director Julie Cromer. (AP Photo/Michael Woods, File)

From court losses to political pressure to questions about how — and if — athletes should be compensated, the NCAA and college sports have faced all sorts of potential existential threats for more than 100 years.

The difference in 2021 was volume. It was as if a century's worth of issues fell on college sports all at once.

Lawmakers took aim at the NCAA, undercutting its ability to govern. The Supreme Court issued a scathing rebuke of the so-called collegiate model. Internally, a new era of athlete empowerment was clumsily ushered in with all sorts of unintended consequences. Another wave of conference realignment swept through college sports, causing disruptions and distrust among its leaders.

“I think it is unquestionably an unprecedented potential crisis the NCAA is facing today,” said Gabe Feldman, the director of Tulane University’s sports law program.

If 2021 was about upheaval in college sports, 2022 will be largely defined by reform. College sports leaders will attempt to redefine the NCAA. The goal is to s hift power away from the national governing body to conferences and schools, while still maintaining the association; To be more accommodating to the wide-ranging goals and needs of a wildly diverse membership, while still remaining tethered through competition.

Sankey has been appointed co-chairperson of the NCAA's Division I Transformation Committee, along with Ohio University athletic director Julie Cromer.

That group will begin its work in earnest after the NCAA convention in late January, when a new pared-down constitution is expected to be ratified by membership. That will open the door for each of the NCAA's three divisions to create a unique governance structure.

For Divisions II and III that will mean little change. In Division I, which is comprised of 350 schools that compete in the NCAA's biggest championship events — such as the March Madness basketball tournaments — the transformation could be radical.

NIL is shorthand for name, image and likeness. After decades of prohibiting athletes from earning money from their fame, the NCAA loosened those restrictions close to the point of total deregulation this past summer.

For the vast majority of athletes, the endorsement deals have produced modest financial gains with little attention paid. According to data compiled by Opendorse, a company that works with schools on various NIL issues, the average NIL compensation for Division I athletes between July 1 and Nov. 30 was approximately $250 per month.

Other deals have been far more lucrative, made national headlines, and in some cases, seem to flaunt rules that still prohibit pay for play or recruiting inducements.

The NCAA has pleaded with Congress to pass federal NIL legislation to override dozens of state laws that have forced a patchwork of rules and seemingly no enforcement.

Congressional help appears nowhere in sight, and the lawmakers who seem most motivated to get involved in college athletics do not want to stop at NIL.

A restructuring or reimagining of the NCAA and its top division is in many ways a chance for the leaders of college sports to prove to lawmakers, judges, athletes and — to some extent — each other that college sports can manage its own house.

Sankey, Livingstone and others who will be part of the transformation committee say they enter the process with open minds, ready to share ideas and facilitate solutions that can gather consensus.

Things could get testy.

Core questions need to be asked about what schools should be in Division I. Is there a need for a new division that provides even more autonomy and power to the wealthiest schools and conferences? And if so, will smaller schools be squeezed out of the marquee championship events by shrinking access or the inability to keep up as the most powerful schools play by their own rules? Or both?

There is concern the powerful will grab more power, the wealthy will claim more of the revenue. Those at the top of the college sports food chain insist that is not the goal.

“But we’re challenged. We have to acknowledge our reality,” Sankey said. “How do we function differently?”