NCAA's Midwest Region full of upsets but maybe not surprises 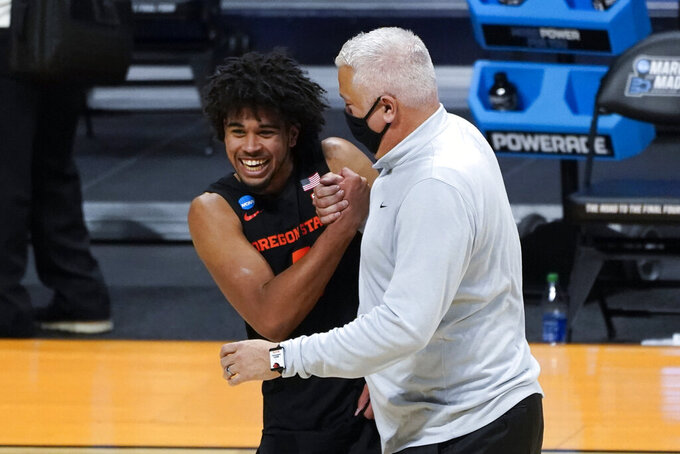 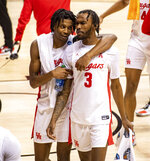 INDIANAPOLIS (AP) — It is the region that has caused more busted NCAA Tournament brackets than any other, the quadrant where No. 1 seed Illinois was sent packing by Loyola Chicago, West Virginia was dumped by a team that barely made the field, and Tennessee and Oklahoma State failed to survive the first weekend.

Then again, maybe the unpredictable Midwest Region should have been a bit more ... predictable.

Take the Ramblers, those perennial overachievers powered by the prayers of Sister Jean. They were in the Final Four just two years ago, have an All-American center in Cameron Krutwig and a coach who has been through this before.

Their opponent on Saturday, Oregon State, romped through the Pac-12 tourney and has lost only once in the last five weeks. The Beavers' coach, Wayne Tinkle, once took Montana to three NCAA Tournaments in a four-year span.

Kind of like Syracuse and Houston, who meet in the other regional semifinal Saturday.

The Orange, who went on a late-season charge just to make the dance, have the hottest player left in Buddy Boeheim. His dad, Jim, has merely led Syracuse to five Final Four appearances and a national title.

They will face the Cougars, who have lived up to their billing as the No. 2 seed. They're in their second straight Sweet 16, have an All-American themselves in Quentin Grimes and a coach in Kelvin Sampson who once took Oklahoma to the Final Four.

“We’re never going to just out-talent you, although we have talented kids. But we’re 26-3,” said Sampson, who also has led Washington State and Indiana to the tournament during his stellar if stormy coaching career.

“We've lost some games maybe we could have had back, but that's OK,” he said. “You're going to lose some games. We've won some games that without our culture we would have lost. Our kids believe in it. It's something to believe in.”

In truth, all four schools still alive in the Midwest Region have cultures that form the foundation for their success. And they were laid down by coaches who have two things in common: They are frequently written off and they just keep winning.

Porter Moser's success with the Ramblers has him linked to about every head coaching vacancy that pops up, including one in his own backyard at DePaul and another down the road in Bloomington, Indiana. Yet few remember that just over a decade ago he'd been fired by Illinois State and was rehabbing his career as an assistant at Saint Louis.

“And you're never happy and you don't enjoy the journey,” Moser continued. "I've been so in the moment of enjoying the journey the last five, six years, the people I'm with and being happy, and then the success comes.”

Tinkle knows a thing or two about journeys.

His playing career took him to basketball outposts such as Topeka, Kansas, and Rapid City, South Dakota, then around the world to Belgium, Sweden and Greece. Once he retired and got into coaching, he took Montana to unknown heights, earning him the job at Oregon State.

Under his guidance, the Beavers have made their only two NCAA Tournament appearances since 1990.

Moser and Tinkle might have detractors, but Boeheim has the market cornered on naysayers. They argue the 76-year-old coach is too old or out of touch. They point to two 20-win seasons in the last seven years, and that antiquated 2-3 zone he uses. They say the game has passed him by.

Yet here are the Orange once again, creating more March madness.

“My father taught me a long time ago, you've got to do what you think is right, and that's it,” Boeheim said. “And if you're coach at Syracuse for 45 years, everybody has an opinion about what we should do or shouldn't do. Maybe the next coach will be better. That's great. I'll be happy to see it. But I do not worry about what anyone says.”

Nobody knows that better than his son, who scored 30 points against San Diego State and 25 more against West Virginia.

“He’s one of the best coaches in college sports, no doubt about it. There’s no one better,” Buddy Boeheim said, “and he continues to prove that. There’s no better feeling than helping bring him to another Sweet 16.”

If Boeheim isn't the biggest lightning rod left in the tournament, he'll be matching wits with the one who is.

Sampson's coaching credentials are undeniable, but so is his reputation for playing loose with the rules. Houston waited out a five-year show-cause penalty for recruiting violations at Oklahoma and Indiana just to hire him in 2014.

Yet the risk and the wait paid off. The Cougars are marching right along in their fourth straight tournament.

“Everything we do is all about memories. The victories and defeats,” Sampson said. “That’s why ABC’s ‘Wide World of Sports,’ Jim McKay — the agony of defeat and thrill of victory. That is still what the tournament is all about.”