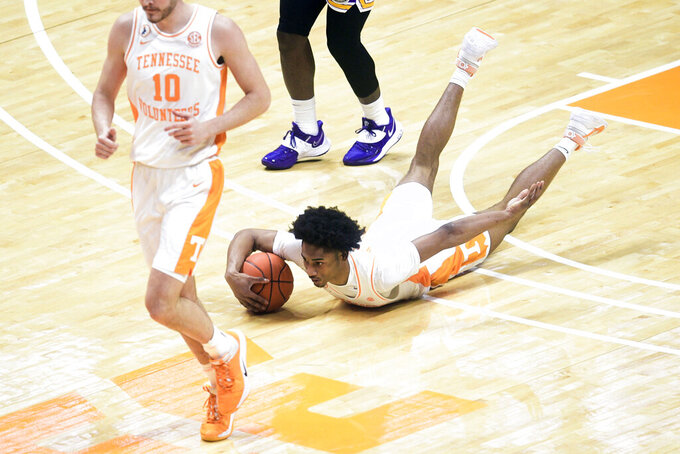 KNOXVILLE, Tenn. (AP) — Jaden Springer, Tennessee's 6-foot-4 freshman, is becoming more comfortable in his role — and it's translating into production.

Springer scored 21 points to lead No. 10 Tennessee over Tennessee Tech 103-49 on Friday night.

“Jaden was terrific,” Tennessee coach Rick Barnes said. “He played within himself. He understands where he wants to get the ball.”

“I'm able to get to my spots and get the ball,” Springer said. “I struggled with the system since I got here. Now, it's becoming easier.”

“(Tennessee is) extremely physical, not only on defense but on offense,” Tennessee Tech coach John Pelphrey said. “That was a real big challenge for us. At times, I thought we played well and moved the ball and got good looks, but didn't make enough to challenge or be competitive in the game.”

After leading by 27 at halftime, Tennessee went on a 17-1 run midway through the second half and got its lead to 76-33.

Springer hit 8 of 10 shots and is 14 of 18 in his last two games. That sort of efficiency is critical for the Vols' success as the Southeastern Conference campaign begins at the end of the month.

“We're learning about each other,” Springer said. “You can see the growth we're making game by game.”

Springer and Johnson arrived in Knoxville this year as highly-regarded freshman. Barnes is emphatic that their significant roles on the team, coming off the bench, have not been given to them.

“They're both winners,” Barnes said. “They've got a competitive spirit about them. There's been no sense of entitlement with them. If they make a move in the lineup, it won't be done during a game. They'll have to do it every single day.”

Barnes said missing work last summer and for a couple weeks during the preseason because of the pandemic impacted the two rookies more than the veterans.

“Every time we shut it down, they went backwards,” Barnes said. “That's expected. They've got so much more in the tank. If we can keep this rhythm going, it will help them more than anybody.”

Tennessee Tech: A rigorous pre-Ohio Valley Conference schedule that included losses to Indiana, Xavier and Tennessee should prepare the Golden Eagles to be more competitive in their league.

Tennessee: After getting such a late start on the season (Dec. 8) the Vols were desperate to get some games under their belt. Even against an underwhelming opponent like Tennessee Tech, it was an opportunity to experiment under the bright lights in anticipation of the SEC opener at Missouri Dec. 30.

Tennessee Tech: A trip to Western Kentucky on Tuesday will be the Golden Eagles' last tuneup before the start of the OVC campaign.

Tennessee: The Vols are in the midst of four games in eight days. Monday will be No. 3 when they host Saint Joseph's, a late addition to the schedule after games with Gonzaga and Notre Dame were canceled.