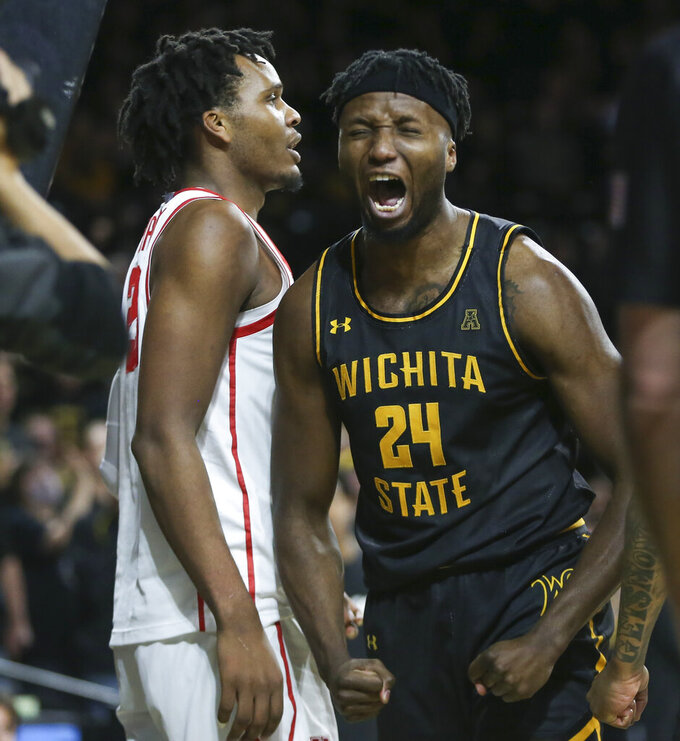 Wichita State's Morris Udeze reacts to a basket and found by Houston's Josh Carlton, left, during the first half of a college basketball game on Sunday, Feb. 20, 2022 in Wichita, Kan. (Travis Heying/The Wichita Eagle via AP) 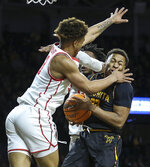 It was Roberts’ only basket of the game and followed Wichita State’s Craig Porter hitting a tying 3-point shot with 5.4 seconds remaining in the second overtime.

The Cougars’ Jamal Shead took the inbounds and raced up the floor, hitting Roberts for the uncontested game-winner.

Houston coach Kelvin Sampson credited a loss to Wisconsin earlier this season, when the Cougars failed to execute in the final five seconds. That situation was addressed in practice repeatedly

Shead scored 13 points for the Cougars while Kyler Edwards, Fabian White and Ramon Walker each added 11.

“This is a confidence builder for us,” Etienne said. “They’re a great team, and we took them to the wire.”

Much of that credit goes to Porter, who scored eight points in the second overtime. The Shockers started clearing out for him every possession.

“But then Houston went zone, and that gave us a problem,” Wichita State coach Isaac Brown said. “Credit Houston for that. They made some crucial plays.”

Houston built a six-point lead in the first overtime behind Carlton, but Wichita State rallied and Porter’s free throw tied it with 18.1 seconds left. Walker’s 3-pointer at the buzzer fell short sending it to a second OT.

The Cougars are still excelling despite listing starting guards Tramion Mack and Marcus Sasser to injuries mid-season. Sampson said victories like this one make all the difference.

“I had two kids play 49 minutes tonight,” said Sampson, who improved to 8-2 against Wichita State. “Think about that. I’ve neer had that. To win six of seven (conference games) on the road for this group is a really big deal.

Houston leads the American in rebounding margin and offensive rebounding percentage (37.2 coming into the game).

But the Shockers outrebounded the Cougars 20-19 in the first half, allowing Houston only four offensive rebounds in 20 first-half opportunities. Wichita State was even better in the second half, outrebounding the Cougars 15-12. But in the first overtime, Houston grabbed four of the first five rebounds while quickly building a six-point lead And near the end of the second overtime, two Houston offensive rebounds led to Carlton’s three-point play with 13 seconds to play. Wichita State outrebound Houston 43-42 for the game.

“Offensive rebounds were big in the second half,” Sampson said. “As the game wore on, I thought our culture really helped us.”

ONE DEFENSIVE ISSUE, KIND OF

“I don’t know what it is about us,” Sampson said. “We bring out the best from the other team in the free throw line.”

One of the things that pleased Sampson the most was his younger players coming through in a tough road game.

“We had three freshmen on the floor tonight,” Sampson said. “Ramon Walker was supposed to redshirt before we had all the injuries. And he got picked on defensively tonight by Porter, but he also banged home three 3-pointers. Those were huge shots for us.”

Houston: The Cougars remain in sole possession of first place in the conference and keep momentum heading toward March.

Wichita State: In position to get a home victory that eased some of the season’s disappointment, the Shockers could not finish off Houston.

Houston: at Tulane on Wednesday

Wichita State: At Memphis on Saturday