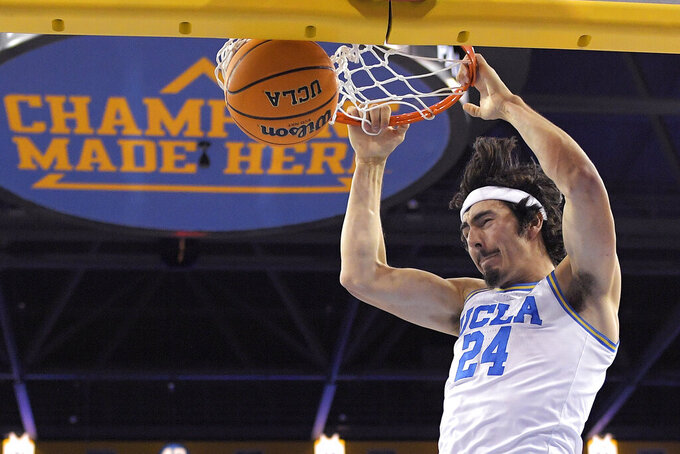 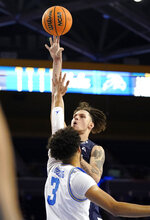 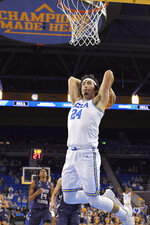 LOS ANGELES (AP) — On a team talented enough that anybody can score, UCLA is still working on its defense.

The second-ranked Bruins knew coach Mick Cronin was unhappy with their effort in a blowout win two nights earlier. They responded with another one-sided victory and this time they defended better.

Although not quite enough to completely satisfy Cronin.

Tyger Campbell had 13 points, making all four of his 3-pointers, and had six rebounds, five assists and no turnovers in 26 minutes for the Bruins (4-0). Jules Bernard scored 15 points.

“This summer I really worked on it,” Campbell said of his long-range shooting. “Coach has told me he has confidence in me and just tells me to go. He trusts me for the shots I take.”

UCLA notched its third blowout win of the season, having beaten Cal State Bakersfield by 37 points and Long Beach State by 21.

“They tried to force us to play half-court defense,” Cronin said. “Tonight was great practice for us.”

Carter Hendricksen scored 11 points to lead North Florida (0-5) as its only player in double figures.

The Ospreys kept it close in the first 10 minutes. Although they never led and once fell behind by nine, they got to 27-24 on a basket by Jonathan Aybar.

That's when the Bruins took over for good.

UCLA closed the half on a 28-9 run, including 15 straight points, to lead 55-33 at the break. Juzang made a 3-pointer, Kenneth Nwuba dunked and Jaylen Clark scored inside during a spurt that featured points from five different players.

“That says a lot about our team and how unselfish we are as a group,” Jaquez said. “We’re all going to share the ball and get the shots we’re going to get.”

Jaquez came off the bench just before the decisive run began. Peyton Watson stole the ball from Jose Placer and hit Jaquez with a long pass that led to a fast-break dunk. Jaquez followed with a 3-pointer before he scored the Bruins' final two baskets of the half.

The Bruins ran off 11 points in a row — five by Bernard and four from Jaquez — to open the second half and build a 30-point lead. Bernard's driving layup gave UCLA its largest lead of 33 with 6 1/2 minutes remaining.

The Bruins dominated nearly every category, controlling the boards 54-24, including a whopping 24-6 edge on the offensive glass. They hadn't had that many offensive boards since grabbing 25 against Southern California on Jan. 19, 2008. UCLA owned the paint 50-30 and had a 30-6 advantage in second-chance points to go with eight steals.

“They really understand who they are,” Ospreys coach Matthew Driscoll said. “They have connectivity on both ends of the floor — on offense and on defense. They are really together.”

North Florida: The Ospreys went 0-5 on their season-opening trip while playing five games in nine days. They lost by 15 points at Texas Tech, by 18 points at Texas A&M, by 14 points at Grand Canyon and by nine points at Arizona State before hitting LA. Their challenges aren't over, either. They visit No. 13 Kentucky on Nov. 26 and No. 24 Florida on Dec. 8. “We’re finally going home,” Driscoll said. "The good news is we have to play Kentucky next week.”

UCLA: The Bruins will be facing a Bellarmine team next week that is coming off a visit to No. 1 Gonzaga, making it an easy scout for them. The Bruins get a crack at the Zags the following day in their second huge early season test.

Cronin said it's a “very, very minimal" chance that Riley plays next week.

“It's really a two-week minimum injury and he may not want to hear that,” Cronin said.

“Coach always emphasizes how I’m always the biggest guy out there and today I made that known,” Johnson said.

North Florida: Hosts Webber International on Sunday in the first home game of the season.

UCLA: Plays Bellarmine on Monday in the Empire Classic in Las Vegas.