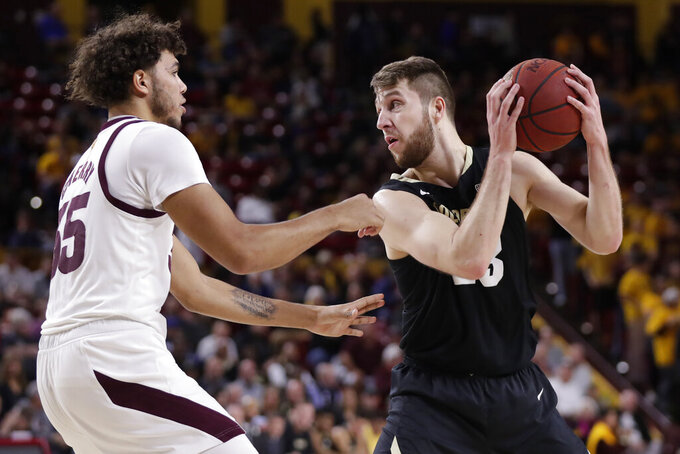 TEMPE, Ariz. (AP) — Colorado's shooting was mediocre and its rebounding was inconsistent. All the while, the veteran Buffaloes never looked concerned, grinding out impressive defensive possessions until a few shots finally fell.

The end result was a rare 68-61 road win over Arizona State on Thursday night. It snapped No. 20 Colorado's six-game losing streak on the Sun Devils' home floor and further solidifies the team's standing in the upper-tier of the Pac-12.

“It feels so good,” Colorado guard McKinley Wright said. “We talked about it all week in practice: Championship teams have to win on the road and our end goal is a Pac-12 championship. It starts here — it starts on the road together and we got one.”

Colorado won its first road game in conference play and has won seven of eight overall. Siewert hit 4 of 6 3-pointers and Bey made his only attempt from long range to give the Buffaloes some much-needed offense.

It was a disjointed, physical game that was equal parts good defense and bad shooting. Colorado made a few shots in a row midway though the second half and an 11-0 run pushed its lead to 44-32 with 10:35 left.

“Our guys did what they had to do,” Colorado coach Tad Boyle said. “Sometimes you've got to win ugly on the road. That's what we did."

Arizona State (10-7, 1-3) has dropped five of its last seven. The Sun Devils pulled within 49-44 with about 7 minutes left but Siewert responded with his fourth 3-pointer to stop the rally.

“We had our chances,” Arizona State coach Bobby Hurley said. “Really anybody had the chance to take command of the game. We went empty — had some turnovers, missed some free throws. We were never able to gain any momentum.”

Arizona State's players besides Martin and White combined to shoot just 6 of 35 (17%) from the field.

“We need some other guys to be a little more consistent than they were tonight,” Hurley said.

Wright made a layup with 33 seconds left before halftime to tie the game 28-all going into the break. The Buffaloes struggled on offense for much of the half, shooting just 9 of 27 (33%) from the field. But their defense was terrific, just as its been for most of the season.

Colorado came into Thursday giving up 61.3 points per game, which ranks second in the Pac-12.

“That's all we talk about is defense at halftime or before the game,” Bey said. “We don't really talk about offense because we let that just come to us.”

Siewert helped the Buffaloes early by scoring 11 points off the bench in the first half, making 3 of 4 shots from 3-point range. Arizona State was led by Martin's 12 points.

The two teams already played once this year, Nov. 8 in China. The Buffaloes won 81-71 but it didn't count as a conference game.

Colorado: It wasn't the prettiest win, but the Buffaloes will take it. Colorado starts three juniors and a senior and the veteran presence was obvious when the team didn't panic after a poor offensive start.

Arizona State: The Sun Devils had a chance to win this game thanks to their defense, but the bad offensive day was too much to overcome.

Colorado: The Buffaloes travel to face Arizona on Saturday.