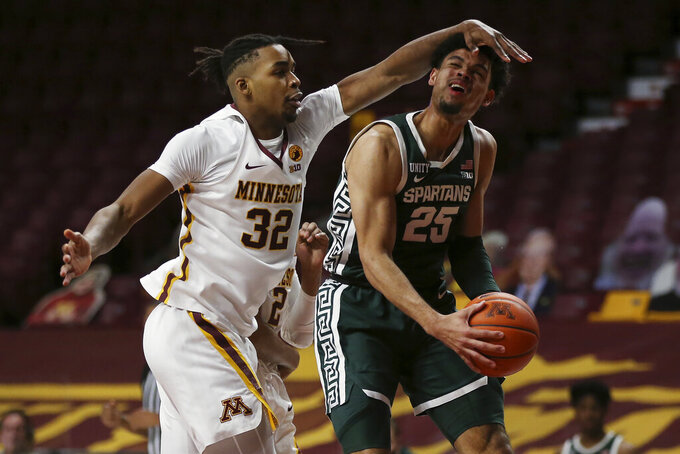 MINNEAPOLIS (AP) — Three days after surging back to beat Iowa in overtime behind a stream of 3-pointers, Minnesota followed with a decisive victory over Michigan State on the strength of a stifling defense.

The Gophers have made their case to be included in the crowd of contenders in this loaded Big Ten.

Liam Robbins had 18 points, nine rebounds and three blocks, helping No. 21 Minnesota beat No. 17 Michigan State 81-56 on Monday night while holding the Spartans to 25.7% shooting.

“It confirmed that we’re a tough team and a determined team,” Robbins said. “It just shows this group is just willing to do anything to get it done.”

Marcus Carr scored 19 points with five assists, as the Gophers (9-1, 2-1) never trailed the sputtering Spartans — who missed 52 of 70 field goal tries — and outrebounded them 52-36. This was Minnesota's largest margin of victory ever over Michigan State, matching a Jan. 4, 1997 game later vacated by the NCAA.

Despite three transfers — Robbins, Brandon Johnson and Both Gach — in the starting lineup and a freshman getting sixth man minutes — point guard Jamal Mashburn Jr. — out of a limited offseason, Minnesota has made the most of this pandemic.

“We try to spend as much time as possible together," Johnson said. “Our bond, it grows every game.”

Aaron Henry had 11 points and three assists for paltry team highs as the Spartans (6-3, 0-3) hit their first 0-3 start in conference play in 19 years. They lost last week to Northwestern and Wisconsin, two of the record nine Big Ten teams that landed in the latest Associated Press poll.

“We don’t have great leadership. That doesn’t mean it’s bad. It’s just hard to find one of those alpha dogs. I’ve had four or five of them my whole career,” coach Tom Izzo said.

Robbins, the 7-foot transfer from Drake, held his own against Iowa star Luka Garza and found more room to roam with a 3-inch edge on Michigan State's Joey Hauser. Robbins hit a 3-pointer on the opening possession, mixed in a handful of successful soft hooks and showed off his passing skill with a slick high-low feed to Gach for a layup and a three-point play after a foul on Hauser that gave the Gophers a 46-21 lead.

“That’s my guy. He had this type of performance in him,” Johnson said. “He just had to relax, find his tempo of the game, and pick his spots.”

After losing by 27 points at Illinois on Dec. 15, the Gophers have found themselves too.

“Illinois absolutely kicked our butts, and we didn’t freak out about it. It’s only worth one," said coach Richard Pitino, who picked up his first win at home in five tries against the Spartans.

The Minnesota game production crew plays an audio clip from Foreigner's 1977 rock tune “Cold as Ice” while the visiting team is introduced. Maybe it works. The Spartans missed 27 of their first 31 shots from the floor. They went 5:40 without scoring at all in the first half, with Joshua Langford finally stopping the skid with a 3-pointer from the corner.

Hauser, who had a career-high 27 points in a loss at home to Wisconsin on Friday, scored six points on 1-for-8 shooting. Rocket Watts had only two points while going 1 for 9 from the floor. In Michigan State's three Big Ten games, he's 5 for 29 shooting for just 12 points.

“It just wasn’t our night as far as shooting the ball, and I think that led to easy baskets on their end and also just kind of defeated us,” said Foster Loyer, who had eight points.

According to Sports Reference data, this was the lowest opponent shooting percentage against the Gophers in eight seasons under Pitino.

The Gophers cracked the AP Top 25 on Monday for the first time since Dec. 10, 2017. Coupled with their win over then-No. 4 Iowa on Friday, they've faced and defeated consecutive opponents ranked in the AP poll for the first time since Michigan State and Purdue in the Big Ten tournament in 2010. The Gophers have five more games in a row against teams currently in the AP Top 25.

Michigan State: Izzo sought a spark by bringing Henry off the bench, starting Loyer at point guard, moving Watts to shooting guard and Langford to Henry's wing spot. There was little flow to the offense and hardly a fast break, only forced jumpers and just plain old bad luck of the bounce.

Minnesota: Johnson, who made eight of nine 3-pointers against the Hawkeyes, had nine points and seven rebounds. The Gophers shot only 6 for 25 from 3-point range, but they did just about everything else well as guards leapt for long rebounds and forwards scrambled for loose balls.

Minnesota: Plays at No. 6 Wisconsin on Thursday.