No. 21 UConn sends Hoyas to school-record 18th loss in row 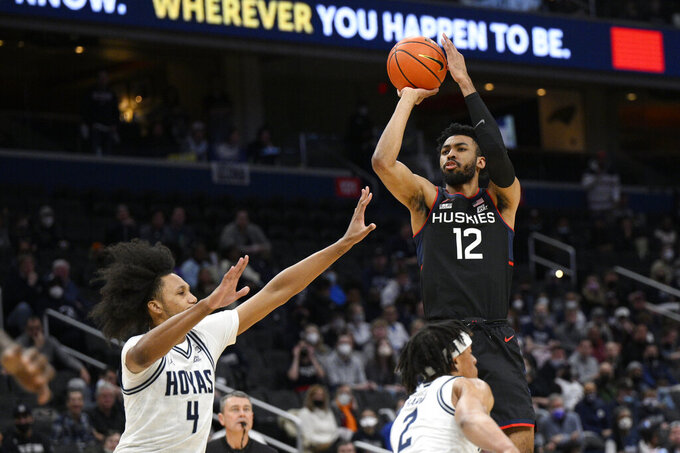 WASHINGTON (AP) — R.J. Cole scored 18 points and No. 21 UConn excelled from behind the arc while sending Georgetown to its school-record 18th straight loss, 86-77 on Sunday.

Isaiah Whaley scored 14 points and Tyler Polley and Jordan Hawkins each added 11 as UConn matched its longest winning streak of the season at five. Adama Sanogo, averaging over 15 points per game, finished with six after fouling out in 18 minutes.

“You go into a year and you lose a killer like (James) Bouknight and you literally go into the season and he’s got to get 15 or 16 (points) and four or five assists,” UConn coach Dan Hurley said of Cole, who stepped into a leading role after last season's leading scorer was taken 11th in the NBA draft.

“R.J. has given this team exactly what it’s needed at the guard spot after losing a dynamic guy.”

Georgetown (6-22, 0-17) remained winless in conference play. Coach Patrick Ewing, who starred for the Hoyas in the 1980s and won a national championship and appeared in three Final Fours as a player, has posted just one winning season in his five at the helm of his alma mater. His career record is 68-81.

“Of course, I want to be back here,” Ewing said when asked about his future.

“But in this position and this job, whatever happens will happen. I’m hoping that I’ll be back and doing something that I love at a place that I love and getting us back to being the king of the hill.”

Cole made his fourth 3 of the game right in front of the Huskies bench to extend UConn’s lead to 66-46 with 11:27 remaining, forcing Ewing to call timeout. The Howard transfer shot 4 of 6 on 3-pointers.

UConn led 41-26 at halftime and pushed the lead to 81-59 with 2:53 remaining before Georgetown ended the game with a late run.

UConn: The Huskies remained in third place — a game ahead of Creighton — with one week left to play before the Big East Tournament begins at Madison Square Garden on March 9. Hurley has the Huskies in great shape to make consecutive NCAA Tournaments for the first time since 2011-12 under former coach Jim Calhoun.

Georgetown: The Hoyas have clinched their first last-place finish in the Big East since the league began in the 1979-80 season and are now closing in on both a school record for losses and the record for conference losses in a season. Last year’s improbable four-day run to the Hoyas’ record eighth conference tournament title that seemed to go a long way towards cementing Ewing’s job status now seems like a thing of the distant past.

When asked if it was a point of emphasis to limit Georgetown’s offensive rebounds after a possession where the Hoyas grabbed three, Hurley corrected the reporter.

“It wasn’t a point of emphasis,” Hurley said. “It was a point of anger.”

Hawkins — a freshman from nearby DeMatha Catholic High School in Maryland — had his best game since scoring 15 in the first meeting with the Hoyas on Jan. 25. He got in the scoring column with a big dunk over Mohammed while also drawing the foul to give the Huskies a 15-13 lead with 12:12 left in the first.

“It was crazy,” Cole said about the jam.

“He’s really grown into his own right now and I’m proud to see it.”

UConn: Visits Creighton on Wednesday and finishes the regular season at home against DePaul on Saturday.

Georgetown: Travels to Seton Hall on Wednesday and ends the regular season at Xavier on Saturday.