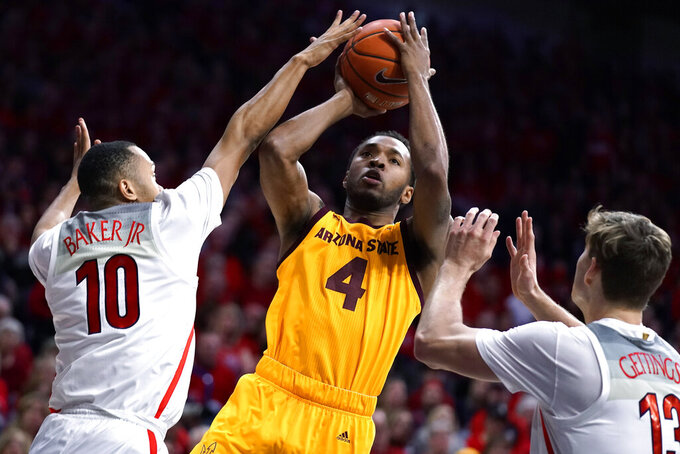 TUCSON, Ariz. (AP) — Arizona dominated inside, got out in transition and cleaned up most of the mistakes that plagued it late in the nonconference season.

As Pac-12 openers go, the Wildcats couldn't have asked for much more.

Zeke Nnaji had 17 points and 11 rebounds, helping No. 25 Arizona to an overpowering 75-47 win over rival Arizona State on Saturday night.

“I was worried because we hadn't played a game in a while and we didn't play well in our last game,” Arizona coach Sean Miller said. “It was good to see our team respond.”

Arizona lost both games to its biggest rival a year ago, but made sure the streak didn't continue with an impressive display of power and speed.

The Wildcats (11-3) had a size advantage inside and used it, outscoring Arizona State 50-18 in the paint. Arizona repeatedly raced past the Sun Devils, outscoring them 25-9 in fast-break points.

The Wildcats also were stellar defensively, contesting shots inside, jumping into passing lanes to start the break and quickly turn the rivalry game into a rout.

With big man Romello White limited due to an ankle injury, Arizona State (9-5) generated almost no inside game against Arizona's length. The Sun Devils also struggled to get anything to fall from anywhere, shooting shot 31%, 3 of 21 from 3-point range and 8 for 19 on free throws.

“We didn't play the way we needed to on the offensive end, again,” Arizona State coach Bobby Hurley said. “Missed free throws, open shots, late in the half especially where maybe it could have been a little more manageable at halftime put us behind it.”

The Sun Devils swept the season series last year for the first time since 2008-09.

Arizona State arrived in Tucson after an up-and-down nonconference schedule. The Sun Devils beat St. John's and Georgia, but lost two of their final three games, including a 40-point blowout to Saint Mary's in Phoenix.

Arizona won its first nine games before closing out the nonconference season with three losses in four games.

The Wildcats pushed around the smaller Sun Devils, dumping the ball into the post early in nearly every possession to utilize their size advantage. Arizona led 36-17 at halftime.

The Wildcats' length down low caused the Sun Devils even more trouble offensively. Most of Arizona State's first-half possessions were disjointed and, with no room to operate, often ended with jump shots.

Then again, the Sun Devils had trouble shooting with no one guarding them, too, missing their first six free throws while going 2 for 8.

“Some of them were fairly open,” Hurley said. “Guys just have to make them.”

The second half didn't get any better for the Sun Devils.

Early on, Green grabbed a rebound off a missed Arizona State free throw and scored on an uncontested dunk, sending the Sun Devils' Hurley storming down his bench to find two replacement players.

It didn't do any good. Arizona kept its foot on the gas, stretching the lead to 20 and beyond.

Arizona State was able to overcome its lack of size some during the non-conference schedule. The Sun Devils may find it a bit tougher during Pac-12 play, as they did against Arizona.

Arizona was solid at both ends to kick off its Pac-12 season with a confidence-building win over its biggest rival.

Arizona got a nice lift with the return of forward Stone Gettings.

A grad transfer from Cornell, Gettings had not played since suffering a facial fracture and concussion against Penn on Nov. 29. He received a warm ovation after entering the game and finished with five points and five rebounds in 17 minutes.

"Stone means a lot to our team because he's a different type of player," Miller said. "During the game, it really felt different having him back."

Arizona State was decent on free throws this season, shooting 69%. The Sun Devils struggled mightily in McKale Center, perhaps, in part, because of the pressure.

“It's a tough environment, there's a lot of noise, it's a big game, a lot on the line,” Hurley said. "Not trying to make any excuses, but we've shot better.”

Arizona plays at No. 4 Oregon Thursday.