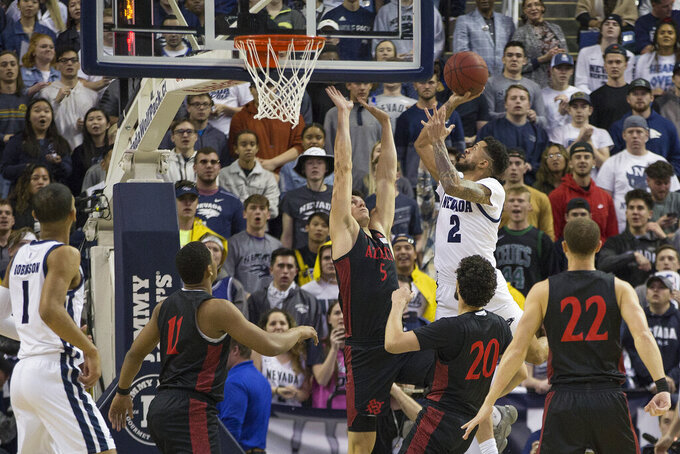 “We like playing on the road,” Feagin said after San Diego State finished the regular season undefeated in road and neutral games (14-0).

“We like the road environment," he added. “It was hostile here. ... It was a gut check. We were down. We were bruised, but not defeated.”

Malachi Flynn had the biggest impact in the comeback victory by scoring 36 points, more than any Aztecs player since 2005 on 13-of-20 shooting from the floor.

“It’s cool, but the regular season is over,” Flynn said of setting a career high in points. “We have to move on. It’s March.”

Feagin said Aztecs fans can be relieved knowing his brief departure with an ankle injury won’t be as serious as originally appeared. He returned and finished with 14 points for the Aztecs (28-1, 17-1 Mountain West) while shooting 4 of 10 beyond the arc.

“It hurts right now, but my team needed me,” Feagin said. “Everything else should be fine by tournament time. In two or three days, I should be able to play again.”

But the Aztecs answered with a 31-12 run over the next 10 minutes. Nevada was scoreless from the field for seven straight minutes during that stretch.

“I’m a little concerned over the last three games,” Dutcher said of a stretch that included his team's only loss of the season against UNLV. “We’ve been letting teams shoot 50%. We have to get back and play a higher level of defense because it’s March. We can’t let teams shoot like that against us.”

San Diego State’s 17-1 Mountain West record this season is the highest winning percentage of any team in conference history, eclipsing Utah (13-1) in 2004-05. It’s also the best record in school history.

Nevada came minutes away from pulling off the program’s first regular season win against a Top 5 team and its first ever since it beat No. 3 Gonzaga in the 2004 NCAA Tournament.

San Diego State: The Aztecs finished the regular season with one loss and avenged two blowout defeats at Reno the past two years: 28 last year and 25 in 2017-18.

San Diego State: The Aztecs' fate as the No. 1 seed in the Mountain West Conference Tournament was clinched Feb. 11 after their 82-59 win against New Mexico. But the one-loss squad looks to keep winning in pursuit of a No. 1 overall seed in the NCAA Tournament as it heads to Las Vegas next week as the favorite in the conference tourney.

Nevada: The Wolf Pack heads to the Mountain West Conference Tournament next week with a first-round bye and no worse than a No. 3 seed. “It will be interesting to see how we handle it,” Alford said, “but we are much more improved than we were about a month ago.”