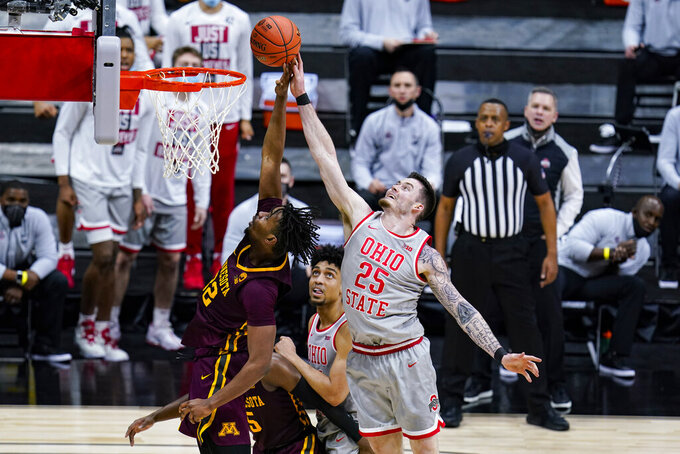 Minnesota center Sam Freeman (32) and Ohio State forward Kyle Young (25) go up for a rebound in the second half of an NCAA college basketball game at the Big Ten Conference tournament in Indianapolis, Thursday, March 11, 2021. (AP Photo/Michael Conroy) 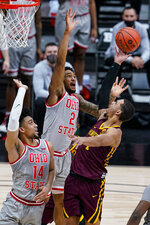 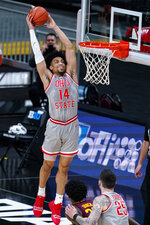 So were his players.

After scoring the first 13 points of the game and nearly blowing a 14-point lead in the final 3 1/2 minutes, the ninth-ranked Buckeyes finally found a way to close out a 79-75 victory over Minnesota on Thursday in the Big Ten Tournament. Ohio State will face No. 21 Purdue in Friday's quarterfinals.

“I think as much as anything guys were excited,” Holtmann said. “Disappointed in some plays they made there late, but I want them to enjoy this. They’re college basketball players. It’s not life and death and you can feel like that sometimes when you lose a couple.”

But a combination of errant shots, missed free throws, turnovers and one costly offensive foul allowed Minnesota to charge back. The Gophers got as close as 75-74 with 13.3 seconds left before the Buckeyes steadied themselves.

While Duane Washington Jr. and Justice Sueing each scored 16 points to lead the Buckeyes, E.J. Liddell sealed it with two late free throws and some nifty ball-handling. Liddell had 14 points, five rebounds and four assists.

“I knew E.J. was going to try and stay inbounds at the end,” Sueing said. “He was able to stay composed, not rush a pass and he made the right play to close the game out, so that was good by E.J.”

For Minnesota (14-15), it was another torturous finish.

Marcus Carr scored 24 points and Jamal Mashburn Jr. finished with 18 to lead the Gophers, who lost for the eighth time in nine games. But coach Richard Pitino, whose job appears to be in jeopardy, appreciated the way his players fought.

They cut that 13-0 deficit to to 24-20 late in the first half — only to see Ohio State rebuild a 39-27 cushion at halftime. The Golden Gophers closed within 53-49 midway though the second half, too, then watched the Buckeyes go on a 9-1 run. They even got close enough at the end to give Holtmann and Ohio State a scare.

Minnesota: While the dreadful start doomed the short-handed Gophers, they fought hard. They just didn't have enough bodies or scorers to stay with the Buckeyes. Now comes the hard part — figuring out whether the program can turn the corner and whether Pitino will be part of the solution.

Ohio State: The Buckeyes were far from perfect in their tourney opener but showed grit and, at times, why they are a Top-10 team. But they were sloppy, too, and Holtmann acknowledged his team can't afford another 15-turnover game if it hopes to capture the school's fifth tourney title.

Pitino didn't dodge questions about the possibility of being fired. Instead, he took them head on.

“It’s not my decision. We all have bosses. I do have a great relationship with Mark (Coyle),” he said, referring to the Gophers' athletic director. “If he gives me some bad news, that doesn’t mean I’m going to flip a desk or something. Life goes on. Would I love to be back? Of course, I’d love to be back. Not my decision.”

Minnesota: Faces an offseason of uncertainty.