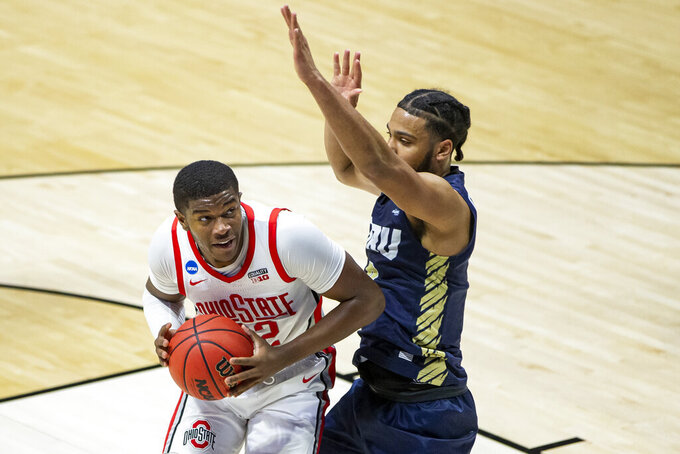 Ohio State's E.J. Liddell, left, gets pressure from Oral Roberts' Kevin Obanor during the first half of a First Round game in the NCAA men's college basketball tournament, Friday, March 19, 2021, at Mackey Arena in West Lafayette, Ind. (AP Photo/Robert Franklin)

Liddell was rattled by a social-media rant directed at him after the Buckeyes were upset by Oral Roberts in the first round of the NCAA Tournament on Friday. Ohio State took the threats seriously enough to alert police, and Liddell decided to make them public via a Twitter post that has been liked over 223,000 times, retweeted more than 17,000 times and attracted national media attention.

“I just wanted to use my voice a little bit,” Liddell said Wednesday in a video call with reporters. “I’ve been quiet about it, and I just keep pushing because I have pretty tough skin when it comes to criticism. But that wasn’t constructive criticism — it was just brutal, hardcore. Just didn’t sit right with me."

The rant at Liddell ended with: “I hope you die”

“I still don’t understand why anybody would come at me like that,” the sophomore forward said. “I definitely haven't hurt anybody in my life like that for those words to be said about me.”

Liddell said 98% of Buckeyes fans are supportive even in the bad times, but there's always the other 2%. “Sometimes fans get too high or too low, honestly," he said. “They act out of emotion.”

Liddell wasn't the only tournament player to incur the wrath of a fan who felt wronged by his team's performance.

Illinois center Kofi Cockburn posted a screenshot of a racist Instagram message after the top-seeded Illini were upset by Loyola Chicago. Cockburn replied to the screenshot with this comment: “I blame his parents.”

The university said it was investigating.

“A lot of athletes reached out to me and told me they were going through the same thing, and just have a tough skin and keep your head up,” Liddell said. “(Purdue star) Trevion Williams said he’s been getting things like that since his freshman year. And that’s not OK.”

Liddell said he hadn't considered dropping off social media because with all the pandemic-related restrictions on where players could go and who they could see, social media was their link to the outside world. “If you really think about it, this year social media is our social life,” he said.

Liddell hopes that if enough people talk about this issue, it will begin to get resolved.

“I know I’m not the only one going through things like this, and it’s better to use my voice than stay quiet all the time,” he said. “I feel like if I use my voice and lot of other athletes uses their voice, hopefully this will slow down and in the near future come to an end.”